Not An Aberration: Why There Could Be Many More Karnans In Upper Judiciary 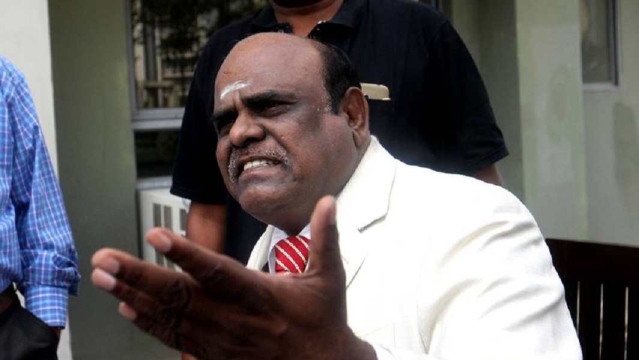 Justice Karnan was asked by the Supreme Court to undergo a test to examine his mental soundness.

The impending six-month jail sentence of Justice C S Karnan of the Calcutta High Court for contempt of court will bring the curtains down on what must be the most sordid episode of judicial misdemeanour in post-independence history. However, it would be a mistake for anyone – including the Supreme Court that sentenced him – to assume that his case was an aberration.

Yes, he was indeed an aberration, but only in the sense that he did not have the grace to accept the limitations set on him by the system, howsoever corrupt or unfair it may be. He was an aberration also because he chose to be loud with his allegation-peddling, thus making it impossible for the Supreme Court to overlook it.

But, in a larger sense, Justice Karnan was not an aberration, for the system regularly produces judges of his kind, including politicised, corrupt or compromised ones. The mere fact that no major judge in the higher judiciary has yet been exposed does not mean that the system can keep its nose clean. It is not.

In September 2010, former law minister Shanti Bhushan made an open allegation in the Supreme Court that eight of 16 former chief justices of India (CJIs) were corrupt. He even gave the court the list in a sealed cover. The court did nothing about this serious allegation, nor did it haul Bhushan for contempt. If Justice Karnan had done his protest quietly, he might have survived in his role for a while longer – and might even have been eulogised as a whistleblower.

There have been several allegations about former CJI K G Balakrishnan’s kin coming into large properties during his 10-year judicial tenure in Delhi. Another former judge of the Kerala High Court had alleged some time ago that Balakrishnan’s kin were fixers of a kind.

Markandey Katju, another former Supreme Court judge, has been loquacious post retirement. Among other things, he alleged that three former CJIs allowed the appointment of a corrupt judge in one of the lower courts in Tamil Nadu under pressure from politicians.

In 2009, the collegium proposed the elevation of Karnataka High Court Chief Justice P D Dinakaran to the Supreme Court, but the appointment was waylaid by lawyers alleging he was embroiled in a land scam in Tamil Nadu. The collegium had to abandon him with red faces all over.

The problem with the current system of selecting judges is not only that it is non-transparent, but that it is impossible for the collegium to vet the hundreds of recommendations that come from the high courts. A Times of India report today (10 May) says it had asked the collegium that selected Justice Karnan how he managed to slip through its filter, and this was the answer: “As collegium members, we must have selected over 100 persons for appointment as judges. We mostly go by the recommendations of the HC collegium comprising the chief justice and two senior-most judges.”

In other words, once a judge is recommended by the High Court collegium, the SC collegium will probably not stop an appointment unless some of the members know a judge to be wholly unsuitable. The TOI report also quotes the judges who chose Karnan as saying that “there is an unwritten convention in the Madras HC collegium to give opportunities to advocates from the Dalit category to become judges even though there is no reservation in such appointments. Karnan always felt he was being targeted because of his Dalit background and targeted his colleague judges for this.”

So, this makes two things clear: caste is indeed a consideration in some judicial appointments; and the collegium is not quite equipped to sift bad apples from good when recommendations come from the High Courts below them.

But this leads us to the question: is the problem at the level of the High Court?

In a sense, it is. High Court judges are picked from lower court judicial candidates or prominent lawyers, and both these categories are influenced by political preferences and affiliations. Justice Karnan, for example, was an AIADMK booth agent 15 years ago.

And many lawyers swirling around High Courts are a law unto themselves, if not actually cavorting with criminals. As Dhanya Rajendran wrote some time ago in TheNewsMinute.com, many lawyers are indeed criminals, with some not even stopping at murder to further their own commercial interests (read the story here).

In 2012, lawyers of the Karnataka High Court rioted in Bangalore, injuring a judge and 86 others.

In February 2016, lawyers went amok near a Delhi court that was to hear the Kanhaiya Kumar case involving seditious slogans raised at Jawaharlal Nehru University.

It is from this swamp of lawless lawyers and some compromised judicial officers that future judges of the higher judiciary are selected. Thus, the chances of the wrong ones being elevated are significant.

To drain the swamp, clearly judicial appointments, both for the lower judiciary and the higher judiciary, must be put through a strong, institutional sorting process which eliminates the risk of poor quality judges being sent up the ladder. It is good that the Supreme Court is now planning to usher in a common entrance test to pick judges in lower courts. It would do well to consider such mechanism to sift judges who are meant for the higher courts, too. There is no getting away from the need for an institutional structure to pick judges at all levels, which the collegium and government can then ratify.

The biggest mistake would be to treat the Justice Karnan affair as a one-off and not a systemic issue. There are many more Karnans in the judicial woodwork, and they will survive and corrupt the system further merely because they are foolish like Karnan.