Once Again, Here Is Why Uniform Civil Code Is Necessary 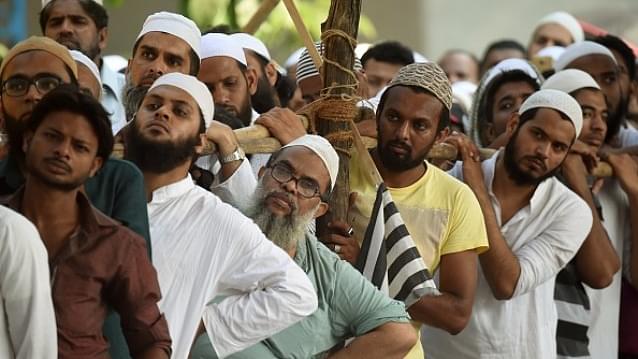 Indian Muslims take part in a protest rally against the implementation of a uniform civil code. (PUNIT PARANJPE/AFP/Getty Images)

To the maulvis and their flock, it denotes an assault on Muslims and on the inviolable and absolute sovereignty of Islam. To the political left, it denotes the bigotry of trishul-wielding Hindutva savages pretending to care about universal rights just for the sake of injuring Muslims. To the Hindu right, it denotes a correction of a grave Indian injustice, exceptionalism for a foreign religion that has always been and is likely to be unrelenting in its hostility to unbelievers, and determined in its mission to not rest till it prevails over all.

The three simple words denote the struggle for India’s soul, words that tell of how fragile the Republic of India is because its constituents have not yet agreed on what it is. This debate should have been resolved decades ago. Since it has not been done, it must be resolved now. The secular republicans are correct – every citizen of the Republic of India must be answerable to the same law. That is the very idea of India.

The rhetoric from liberal commentators is appalling. One commentator, for example, recently argued in the Times of India that “for any social reform to be effective, it must work with a community’s values, not harshly supplant them.”

For the secular republican, the earth must surely shake at such notions. It raises the most savagely fundamental question: “What is the Republic of India?”

The secular republicans thought that the answer was clear – India is a union of millions of fantastically diverse people, differentiated by language, religion, tradition, heritage, narratives, cultures, race and people, who after millennia of division, oppression, injustice and the intractable arbitrariness of rulers have united in their Indianness and agreed to live together in the common pursuit of justice, dignity and security, with equal rights for all citizens, no matter who they are, under a government and law that makes no distinction on the basis of religion, status, caste, gender and identity.

Clearly, this is not a definition favoured by the political left, and certainly not by the maulvis. So, are they to be allowed to corrupt the secular republican ideal of India? India is still far from having completely realised the ideal, to be sure, but is it to be prevented from even getting close?

Some commentators weave a barely credible narrative against universal law that seemingly drips with reasonableness. One commentator talks of how Maulana Azad and others “were open to a future UCC formed through a confluence of India’s various religious traditions”. Does any honest person believe that there is any confluence of morality, values and traditions that is close enough to create a genuine melding of Hindu and Muslim religious traditions to enable a law that is truly compliant with all?

The idea of India is that there doesn’t have to be a confluence. The idea of India is that all people are free to practice their faith in their private lives, but all matters relating to law and government are to be uniform so that all citizens, as individuals, have access to the promise of the Republic through the uniformity of rights and protections provided to all citizens.

If that does not suit the pandit, the maulvi, the padre, the granthi – that’s just too bad for them! Every citizen of India must have the same rights and privileges as all others because that is what we have been denied forever in our history. That is why we have united to form this republic.

What some intellectuals propose is that individual citizens are rightly surrendered to the authority of their communities. Citizens have to comply with whatever rules are in place for the community that they are born in, regardless of whether they agree with it or not. If that is how things are supposed to be, then why have a democratic republic of India at all? Why hold elections for legislatures where laws are passed for the well-being of the citizens? What authority does legislature have, what responsibility do democratically elected representatives have, if citizens of the Republic are condemned to live according to the diktats of their maulvis and pandits, as enforced by their communities?

What freedom of choice, conscience, thought and expression does the Republic of India offer its citizens if vulnerable girls, boys and women have to live with the commandments of ancient religions and their priests?

The political left is in decline around the world because after having established and successfully defended the liberal ideals of equality and universal justice, it has fallen to making excuses on behalf of fundamentally illiberal forces, out of a delusion that they are somehow preserving a multicultural status quo of their making. What they’ve done is sell out their ideals and the citizens, particularly women, to the deepest, most entrenched forces of illiberalism.

At the end of the day, when those of the liberal left argue against a uniform civil code, they are, in effect, validating the two-nation theory, and Mohammad Ali Jinnah. After all, if we all cannot live together under the same laws, with the same rights, the same freedoms, answerable to the same authority, then Jinnah was right – Hindus and Muslims are fundamentally different people and there is no question but to allow them to govern themselves separately.

This is dangerous ground. To start with, it raises the question of what Pakistan was created for if the personal laws of Islam were to have as much space on both sides. Wasn’t Pakistan supposed to be the Islamic republic and India the secular republic? As it turned out, Muslim women in India didn’t get the promise of the secular republic. How is that not a ghastly travesty and a betrayal of those who died in the hundreds of thousands trying to secure the safety of the secular republic?

Worse, it has created the same anti-democratic dynamic among India’s Muslim population as it exists in Pakistan. The maulvis are in control. For many decades now, India has not produced a single dynamic Muslim leader from the grassroots who has charged up the people of India on the strength of their leadership as an elected leader, one with a grand vision for India and its ideals and its people. The field of democracy among Muslims is littered with either the minions of maulvis or the token Muslims of the secular parties, with not one standing on their vision and gumption as a deserving democrat.

The maulvis control Muslim society through family law, as interpreters of the faith, and the liberal political parties make deals with the maulvis for votes. In return, the maulvis exercise complete authority over their flocks, untouched by the Indian state and its ideals of freedom, equality and justice for all.

This grotesque desecration of liberal ideals is what the Muslims of India have experienced of Indian democracy and secularism, thanks to the liberal left.

The uniform civil code is a necessity for the ideals of the Republic of India to be realised. If it’s the Bharatiya Janata Party that’s going to make it happen, then genuinely secular republicans must extend their full support. The liberal left is intellectually dishonest, politically corrupt, morally bankrupt and quite disinclined to realise the dream of a secular democratic republic of India.