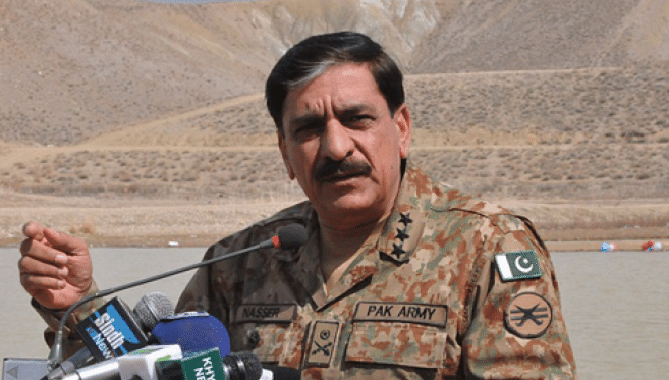 Raheel Sharif 2.0 gets his way as Sartaj Aziz is expected to make way in the appointment of NSA to Lt Gen Nasir Khan Janjua.

Pakistan, located as it is at the crossroads of sub regions and sandwiched between high mountains in the north and a huge ocean in the south, considers military security as the most significant element and subset of national security. Perceived threats from the west and the east, along with raging internal security issues which are almost completely handled by the Army, the idea of security has an overriding color of the military. The last bastion of security, the appointment of the National Security Adviser (NSA) which Prime Minister Nawaz Sharif had reserved as a purely civilian responsibility, was expected to fall soon and it is happening even before that.

Sartaj Aziz, the suave and experienced diplomat who is Pakistan’s Foreign Minister and NSA, all rolled in one, is expected to make way in the appointment of NSA to Lt Gen Nasir Khan Janjua who has just superannuated after the command of 12 Corps, Quetta. He also wore the second hat of the Commander of Pakistan’s Southern Command, the most awkward of command and control arrangements which characterize Pakistan’s faction and ego ridden Army.

Janjua, immediately revives memories of Late General Asif Nawaz Janjua, the Army Chief who died in harness in the early Nineties; he was the elder brother of Shuja Nawaz Janjua who was associated with the Atlantic Council till recently. However, Gen Nasir Khan does not appear to have any links there. His more important link seems to be the full confidence of Gen Raheel Sharif who appears hurtling towards his 2.0 incarnation as he approaches the third year of his tenure. More on that later in this essay. The pressing issue is why a change of responsibility for national security now; and why Lt Gen Nasir Khan. The answer isn’t difficult to seek.

The first reason is clear; the Pakistan Army makes no pretense of its perception that the Pakistan Foreign Service is far less competent to understand or handle national security. After Ufa, that was inevitable. Something that was the prime reason for the status of the Pakistan Army, Kashmir was almost sacrificed at Ufa to the wiliness of Indian diplomats and could not be recovered even in the run up to the botched NSA talks. The Army cannot risk such faux pas again; its primacy is contingent upon the campaign to recover J&K and the dispute must not lose significance.

On the western border and within Afghanistan the Taliban is gaining ground or so it seems after Konduz. President Ghani’s stock is falling. It is the Pakistan Army and the ISI which has the experience of dealing with the Taliban and the situation is now entering a crucial phase there. Without the Pakistan Army directly in charge the chance of it slipping out of Pakistan’s control is live. Sources indicate that the US too is unconvinced about PM Nawaz Sharif’s handling of the turbulent and dynamic situation in Af-Pak and wouldn’t at all mind the Pakistan Army being in charge. That is realpolitik at its best.

So, enter Lt Gen Nasir Khan, veteran of handling the western front, having experienced operations in Swat and with an earlier appointment as Chief of Staff at Quetta itself. It is as yet unclear whether he will ultimately replace Sartaj Aziz in all his avatars or simply take over the NSA slot to look  more closely at the military situation vis-à-vis both the eastern and the western fronts. One report indicates that he will accompany Nawaz Sharif on an upcoming visit to the US while another points to the possibility of him taking over the appointment on Sharif’s return. Gen Nasir Khan does seem eminently suitable for the appointment of NSA if it has to be handled by an Army man. Firstly, he is junior to Gen Raheel Sharif and therefore will not wield the unnecessary seniority over an incumbent Chief.

Otherwise there could have been many more well qualified senior retired Generals. Lt Gen Tariq Ghazi’s name comes to mind immediately because he was Musharaf’s Defence Secretary in testing times and Gen Raheel Sharif is Musharaf’s protégé. Someone who knows the ropes of government is always an advantage. However, the seniority factor would definitely have come in between. Of all the serving or about to retire Generals Lt Gen Nasir Khan does appear to carry a persona of intellectualism and his stint as President National Defence University (NDU) would definitely have added to his acceptability. In that appointment he would have interacted widely with politicians, other services and think tanks and received a broader education in the bargain.

One of the other clinching reasons for an ex Army man to be NSA would be the feasibility that in future parleys with India if any it would be Ajit Doval in his capacity as India’s NSA who would be involved. The Pakistan Army possibly cannot think of a situation where a Pakistani diplomat, howsoever senior, would be at the helm of negotiations against an India professional security related NSA. He also knows Baluchistan well and therefore will add weight to the alleged Baluchistan dossier which Pakistan keeps threatening India with.

Gen Nasir Khan carries a clean image and is respected for his professionalism. He has been involved in talks with his counterparts from the Afghan National Army across the Baluchistan border. His recent orientation therefore has been Afghanistan based. Obviously Pakistan is according a lower priority towards J&K and that stance is likely to continue for some time; hence the importance for symbolism to project its ability to calibrate the situation in J&K.

As far as Gen Raheel Sharif is concerned he appears to have created a larger than life image about himself, constantly moving, visiting, being with troops and lending empathy where it is needed. There is growth of stature in the last two years and the ISPR is not leaving any stone unturned to embed him firmly in the minds of the Pakistan populace. How well he is controlling possible dissent within the Army cannot be gauged but he is surely hankering for a second or an extended tenure.

An ex-Army NSA sitting in Islamabad will surely be an asset in the exercise towards influencing the Prime Minister and Gen Raheel will not have to stoop to ask for it himself. As it is, rickshaws and trucks are all carrying his mug shots to cultivate the future. There is nothing like having a familiar face in a position of authority and Gen Raheel’s face is now even more visible than Nawaz Sharif or any other politician.