PM Modi is Failing the Hindus, Will He Stand Up? 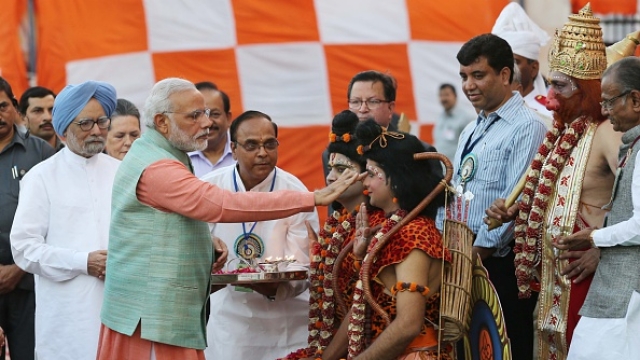 We have been recently subject to a spate of hilarious harangues accusing Prime Minister Narendra Modi of being “disconnected from the people” and that “loonies are representing it on social media” and “fringe members” are dishing out “absurd and offensive statements”.

One is left wondering whether the elimination of the idea of corruption which had become synonymous with governance under the UPA, the time bound electrification of all of India’s villages, financial inclusion through Jan Dhan, unprecedented focus on agriculture through crop insurance, Direct Benefit Transfer (DBT) preventing subsidy leakages and the planned massive infrastructure and development from road to rail occurred in some other continent.

Reading or viewing exclusively that form of old media which elevates (often spurious) news of “Hindu(tva)” intolerance as front page headlines, while often almost censoring the tectonic developmental initiatives, does provide such an impression though. 

A few economic liberals who condescending and non-ideologically if not opportunistically sided with the BJP waste their limited influence by reinforcing such dominant media stereotypes. They perceive their support wasted as the Modi government refuses to sufficiently engage and compromise with certain corrupt opposition in passing their desired economic legislation (like GST) and neither does the government carry out disinvestment initiatives unlike Vajpayee’s time.

Yet, I do admit PM Modi has been a profound failure. Under his ‘powerful watch’, BJP and Sangh Parivar leaders have been killed with impunity across the country by political and ideological rivals.

Hindu animal right activists like Prashant Poojari have been murdered for protesting against illegal cattle smuggling. A Hindu teenager Sawan Dharma Rathod was murdered allegedly by members of another religious community only for being Hindu. A 27-year-old RSS worker Sujith was brutally hacked to death in front of his aged parents in Kannur district in Kerala. Even as I write this piece, it is being reported that a Biju, a BJP worker in Kerala was hacked by deadly CPM goons and is fighting for his life in the hospital.

The PM, to the disappointment of the millions of Hindutva adherents who constitute the core vote of the party, has not offered any solace, any personal words of comfort or security to the Hindus in many parts of India who face every-day, existential threats of religious violence. But the “secular” cabal expects the PM to apologize on behalf of all Hindus for the rare and isolated instance of ‘Hindu intolerance’.

Those who are expecting the PM to forcefully silence the fears and apprehensions of subaltern Hindus, who are unable to articulate their anguish against the betrayal of their idea of India with anything other than unsophisticated, rustic and provocative vocabulary, have double standards. That the sub-alterns will have to remain mute to seditious and anti-Hindu slogans at university campuses by students funded at the taxpayer’s expense is unjust and unacceptable.

While there should be no place for violent intimidations in civilized public discourse, the Indian PM is no more responsible for random outbursts from individuals whether remotely connected to the party with a 10 crore membership with each licensed with their own sense of freedom of expression. Is the US president held morally accountable for hate crimes or gun shootings in the US? Or the UK PM for the creation of ISIS Jihadists among British citizenry due to politics of appeasement in the garb of fighting Islamophobia.

Modi, BJP and Hindu bashing on the internet especially social media has reached epidemic proportions. Pro Hindu ideologues often face legal wrath and threats from their ‘secular’ ideological adversaries, often resorting to venomous intimidation secured by their sense of privileged proximity to the power elite in media and politics. The ironical helplessness of a so called authoritarian government tolerating sadistic media elements who have resorted to an unprecedented wave of calumny and falsehood presumably emboldened by absence of any punitive repercussions has not saved it from the occasional charge of “fascism”.

Islamists and the ‘secular’ fundamentalists have used and misused colonial era, section 153-A and 295-C of the IPC construed against ‘hate speech’ for effectively throttling criticism of Islamism and Muslim personal law from the public discourse.

Under Modi Raj, in the Congress ruled state of Karnataka, Hindus have been arrested for mocking Islamist tyrants like Tipu Sultan who destroyed hundreds, if not thousands of Hindu temples or even merely questioning the “fundamental tenets” of Christianity. In contrast, the abuse directed against Hindu religion and its dharmic universe through appeals to unfettered freedom of expression has continued unabated under this so called Hindu nationalist government.

The perverse attack on Goddess Durga by the leftists in academia and media through appeals to ‘alternative readings’ and the deafening silence of the PM for whom the goddess represents a patron deity for whom he fasts by abstinence from all but water on the nine days of the auspicious nine nights of Navratri remains an enduring paradox.

Similarly, last year, on the occasion of the Hindu festival of Mahashivratri, the Prime Minister was busy attending Christian sainthood functions instead of ensuring Hindus a gazetted holiday on the day. Instead of admonishing those who defamed Hindus for organizing church attacks and rape of nuns the PM submitted to such pernicious narratives despite being aware of their inherent mendacity. Investigations have shown that they were mostly non-communal incidents often carried out by non-Hindus.

Instead of expressing concern at the police documented report of the sacrilege of hundreds of Hindu temples and religious sites annually and expressing his gratitude for Hindu tolerance despite the enormous provocation, the PM preferred the “secular” political correctness which he found so loathsome during his tenure as the Gujarat PM and the campaign trail.

Exclusive minority scholarships and schemes which Modi as Gujarat CM detested were found acceptable in his avatar as PM. Discriminatory laws like the Right to Education remain untouched so as to avoid confrontation against the liberals and prevent derailing of his ambitious developmental agenda. The problem is that the PM seems to have rather internalized the dictum that ‘India is not Gujarat’ rather than what has been alleged as the dogmatic perusal of the Gujarat model for India.

The idea that the government has floundered on the economic front is largely misplaced and a matter of erroneous perception from textbook libertarians. So, is the sense of Hindutva and development being perceived as antithetical by the PM. The paramountcy of development for Modi stems from his belief that ensuring development for all is not only a dharmic commitment for ensuring universal justice by banishing the unnaturally high poverty sustained by corruption and pathetic economics. But it is also perhaps the best antidote to counter the anti-Hindu bigots for once and for all who have persistently argued that Hindutva is the BJP’s political refuge in explaining away its (supposed) lack of delivery on the economic front.

The non-primacy to cultural Hindutva is in essence Modi’s great gamble.