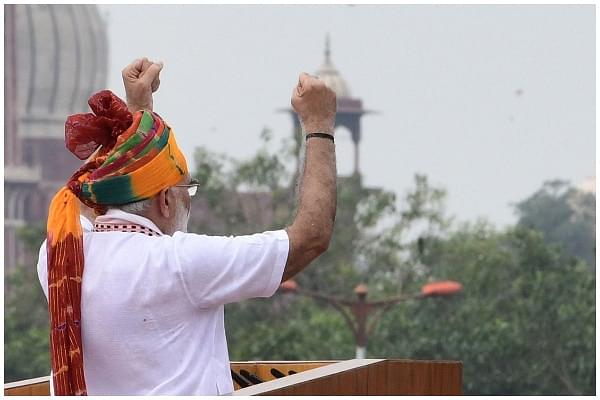 In many ways, India’s seventy-third Independence Day, which coincides with the return of Narendra Modi with a larger mandate in the general elections, marks a watershed in how India sees itself. In his Independence Day address from Red Fort, the Prime Minister signalled the rise of a new, unapologetic India that is putting its past diffidence behind, never mind the practical realities that dictated the compromises we made on a unified nationhood at the time of Independence.

His critics will call it majoritarianism, but what else is democracy but a form of majoritarianism? Modi has signalled that it is time to leave behind talk of a salad bowl nation, where all communities live their separate identities in an uncomfortable coexistence inside one state, and start becoming a melting pot, where a new common national identity emerges.

The key themes raised by Modi in his address were the recent abrogation of Article 370 in its essentials, the triple talaq law, and the desire to see that India is governed under one Constitution. The changes legislated on 5 and 6 August by Parliament did not quite remove Article 370, but replaced the separate Jammu and Kashmir constitution with the Indian one. This may still face court challenges, but whatever the court decides, Modi has indicated which direction the country has to take.

Modi’s call for “one-nation-one-Constitution” carried echoes from other themes articulated by him in his first term, where he legislated the goods and services tax (labelled as “one-nation-one-tax-one-market”), and called for common dates for the holding of central and state elections (one-nation-one-poll). The scrapping of triple talaq in one sitting, which now invites a jail term for violators of the new law, is another step forward towards the creation of an ultimate uniform civil code. One cannot rule out the legislation of a uniform civil code during Modi’s second term.

Just in case the minorities take this as essentially an agenda to put them in their place, Modi repeated his post-poll pledge that he has moved beyond Sabka Saath, Sabka Vikas to Sabka Vishwas too.

A large part of Modi’s speech talked about development, finding solutions to the water, population and agrarian crises, creating jobs, promoting digital technology and entrepreneurship, improving ease of doing business and ease of living, and investing in health and education, but the undertone of his speech suggested that this cannot be done by a salad-bowl nation where there will be opposition to any move forward by different types of narrow interests.

He said that he had abandoned the policies of past governments where difficult decisions were left to fester unresolved and even fostered by some vested interests. He promised he would neither delay difficult decisions nor allow problems to be fostered or fester endlessly, and indirectly accused his predecessors of following “taalne ka kaam aur paalne ka kaam”. He particularly criticised those fear-mongers, who constantly prevented the country from moving forward, including those who are predicting catastrophe after the bifurcation of Jammu and Kashmir and evisceration of Article 370.

This aspect of Modi, where the nation develops not only self-confidence to move beyond its problems and solve them one by one, but also continuously strengthens itself against internal and external enemies, has been consistently demonstrated in his first term and in the first 70 days of the second.

The surgical strikes against Pakistan-based terrorists across the line of control, the Balakot counter-strike in response to the Pulwama terror attack, the Doklam riposte to Chinese mischief, and the Article 370 moves show this determination.

A key decision announced by the Prime Minister was the creation of a new post of Chief of Defence Staff, who will operate above the heads of the army, navy and air force. Once again, this is a sign of a more confident India, where the civil authority no longer fears that the armed forces as a threat to democracy – something that the Nehruvian years, and even the United Progressive Alliance (UPA) years, seemed to fret about.

Business will be particularly happy to hear that he would like to honour wealth creators – something that will help erase the growing mistrust between India Inc and government in recent years, especially with Modi’s emphasis on eradicating black money and ensuring tax-compliance.

In some quarters, this has been seen as tax terrorism. Modi’s reassurance, if followed up by more confidence-building measures, will set India on the road to economic revival and higher investment-led growth.

Modi did not refer to the Bharatiya Janata Party’s Ram temple agenda, which the Supreme Court is now hearing on a daily basis, the expectation being that the case will be decided before the current Chief Justice retires this November. Modi did not, of course, make any mention of this issue, but the chances are if the court verdict goes against the Hindus, the government may consider other measures, including taking over the land for a public purpose and handing it over to the Hindus. The losing party may be compensated with cash or an alternative plot to build a mosque.

But the single most important message is this: India must leave its past behind, and unity has to be emphasised as much as diversity. To repeat, India must transform itself from a salad-bowl nation to a melting pot that does not any more mistake diversity for disunity. There is also a transition from a mere emphasis on soft power to one backed by harder power. Of national unity, backed by economic and military power.