Police Make Arrests In Sadhus’ Murders In Karnal, Claim To Have Busted An Inter-State Gang That Targeted Temples 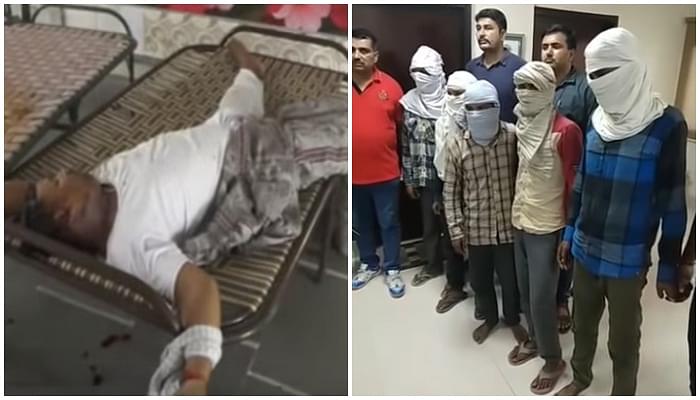 The bodies were discovered on the morning of 19 August by locals who went there for their morning prayers.

These murders had occurred within a week of the horrific triple-murder in Uttar Pradesh's Auraiya district. In Auraiya's Kudarkot village, three sadhus were found tied to cots with their throats and tongues slit. It had later emerged that the brutal killings were carried out by cow smugglers to silence's the priests' opposition to illegal cow slaughter.

In Manglaura too, sadhus were found tied to cots; local newspapers reported that their tongues were slit as well.

Priest Vinod Sharma and sevadar Sultan were found dead at the scene, while priests Ajay Sharma and Ravindra, and Sevadar Harjinder were left severely injured. Later, Harjinder and Ravindra succumbed to their injuries.

The Haryana police this week held a press conference to announce that they have solved the Karnal murder cases. However, they did not reveal the name of the arrested to the media or public. In fact, a report in Dainik Bhaskar published today (14 September) also says that the police is refraining from making the names public.

The police revealed that the accused are part of an inter-state gang operating in six states that specifically targets temples. The police suspect the gang is operated from Kannauj in Uttar Padesh and has about 80-90 members. According to police, the gang operates in groups of seven-eight and targets temples in isolated places. They first carry out a recce of the place and then rob it in the night.

The police said the members use blunt weapons like sticks and branches torn from trees. The police believe that around eight-nine members were involved in Manglaura murders and they are on the lookout for those absconding.

However, while the police is considering these arrests a major breakthrough, there are still gaps in their narrative. There are discrepancies between accounts of locals and that of the police.

While locals reported seeing tongues slit and blood oozing out of the mouths of the victims, Karnal’s Superintendent of Police Surender Singh Bhoria rubbished those accounts in the press conference. He cited medical reports that ruled out usage of sharp weapons and suggested that all injuries were from blunt weapons. Bhoria, however, said that the tongue may have been cut from the impact of heavy branches or sticks that assailants used.

News reports had said that locals found liquor bottles and a used condom at the premises. Even SP Bhoria after the murder had told the media that liquor and "objectionable material" were recovered from the site.

But at the press conference, he did not comment on these when asked by the reporters.

There is also the fundamental question about the motive of the crime. Parveen, a local and one of the first to reach the site, had told media that there was nothing at the premises to suggest that the motive was robbery.

The same was echoed by reporters at the press conference, but SP Bhoria maintained that it was indeed a case of robbery. He said that personal belongings of those assaulted and valuables at the temple were all missing. The police is yet to recover the stolen goods, he said.

The police suspect that the gang may have been involved in committing crimes in Uttar Pradesh’s Auraiya and Roorkee, Uttarakhand’s Roorkee and Nainital, and at places in Punjab, Rajasthan and Madhya Pradesh.

Notably, recent months have witnessed a spate of murders of sadhus.

On 12 September, in a Shiva temple in Uttar Pradesh’s Mathura district, 70-year-old Shyam Giri was found dead with multiple stab wounds. The killers are yet to be caught.

On 6 September, a 65-year-old sadhu named Munna Lal priest was found murdered in Uttar Pradesh’s Bijnor district. The killers are yet to be identified.

On 31 August, body of Rameshwar Dayal, 60, was found with throat slit and dumped in the fields in Uttar Pradesh’s Pilibhit district. The police later arrested Abdul Sayeed and Babu Khan for the crime and said that the motive was robbery.

Again on 31 August, 65-year-old pujari Shamsher Singh was found with throat slit in Uttar Pradesh’s Bababanki. The case is yet to be solved.

On 13 August, body of pujari Shyamlal Upadhyay was found in one Pehelwan Baba temple in Payagipur in Uttar Pradesh’s Sultanpur district. The police later arrested one Sonu Yadav for the murder with the movie being robbery.

On the morning of 24 August, devotees entered a Chhotunath temple in Haryana’s Fatehabad and discovered a pile of ash. It emerged that the ash was of the priest Dholia who had been killed and burnt.