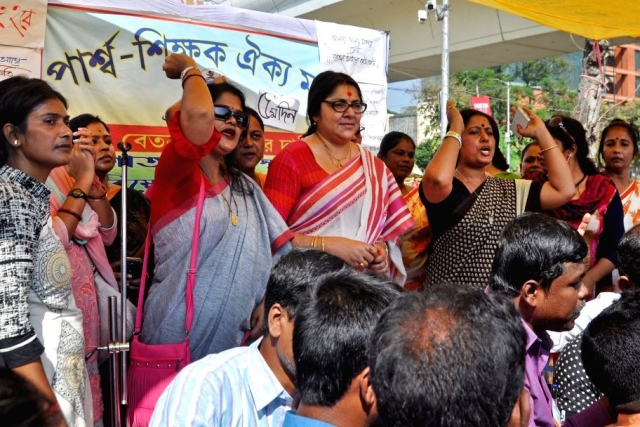 The death of a para-teacher (contractual teacher), who had been agitating along with her colleagues for a pay hike, has triggered anger among all five lakh school teachers in Bengal.

Rebati Raut, a para-teacher in West Midnapore’s Mohanpur, joined the hunger strike on 14 November but fell ill on 18 November and was taken to a government hospital.

Raut was discharged from the hospital after she recovered, but died at home on 21 November. However, as is often the case with such inconvenient deaths, the police and the Trinamool say she died after falling off a motorcycle.

Tapash Bar, 42, another fasting para-teacher, suffered a cerebral stroke on 20 November and was rushed to a government hospital where his condition is stated to be critical.

The para-teachers, who are paid a pittance but have to work as much as regular teachers, have been demanding ‘equal pay for equal work’ and have been on hunger strike since 11 November.

The para-teachers had earlier been stopped by the state government from staging protests and could launch an agitation from 11 November only after securing permission from the Calcutta High Court.

Also, they are paid substantially less than their counterparts in other states and face acute interference from ruling Trinamool politicians.

Not just the para-teachers, but the primary school teachers of the state are also up in arms after a miniscule hike in their salaries, promised by education minister Partha Chatterjee in July this year, remains unfulfilled. Chatterjee had promised the pay hike after primary teachers launched an indefinite fast earlier that month.

When this agitation commenced, an angry education minister refused to even consider their demands and, instead, transferred 14 teachers who were leading the agitation out of their home districts. The teachers intensified their agitation and launched an indefinite hunger strike after this.

The education minister then agreed to a small increase in salaries for them: a Rs 1000 raise for trained teachers and Rs 600 for untrained teachers. He promised to implement the hike from 1 August, and also revoked the punitive transfer orders served on the 14 teachers.

However, the promised salary hike was never implemented and repeated requests to the education department by the primary school teachers were stonewalled. Minister Chatterjee also refused to meet them and said they would have to wait patiently for the hikes since the state was passing through a financial crisis.

Ultimately, the primary school teachers launched another agitation from early this month. The state administration tried to end the agitation by the brute use of force, but that has not been successful.

Resentment is also brewing in the ranks of secondary and higher secondary teachers of the state. There are a total of five lakh school teachers in Bengal, and they are paid much less than their counterparts in the rest of the country.

In September this year, Chief Minister Mamata Banerjee announced her government’s acceptance of the state-constituted 6th Pay Commission for hiking the salaries of 10 lakh state government employees, including the five lakh school teachers.

However, she said that the Pay Commission’s recommendations would only be implemented from January 2020. The implementation will cost the state exchequer Rs 10,000 crore annually, a huge amount for a cash-strapped state.

But state government employees, including school teachers, want the recommendations to be implemented with retrospective effect from January 2016. “There is a huge gap of 23 per cent between our dearness allowance (DA) and that of central government employees.

“Even after the 6th Pay Commission recommendations are implemented, there will be a substantial difference between our salaries and those of central government employees,” said Rajatabha Banerjee of the coordination committee of state government employees.

But as far as Bengal’s school teachers are concerned, it is much more than the meagre salaries that agitates them. “Political interference is what we resent the most. We have to defer to the local Trinamool leaders who dictate terms to us,” said Snehashish Bose, a joint general secretary of an association of school teachers.

There is a lot of political interference in school admission process, in recruitment of teachers, in transfers and postings and also in their day-to-day functioning.

School teachers are often forced to extol the ‘virtues’ of Trinamool chief Mamata Banerjee in the classrooms and recalcitrant ones are punished.

They are forced to join Trinamool-backed unions, donate regularly to social, cultural and religious events organised by local Trinamool leaders and even participate in Trinamool party’s meetings.

Bharatiya Janata Party’s (BJP’s) state president, Dilip Ghosh, who is batting for the agitating para-teachers and primary school teachers, points out that the school teachers are instrumental in laying the basic foundations of society and shaping the future generations.

“If they are unhappy and agitated, the future of Bengal can never be bright,” said Ghosh. For once, both the opposition Congress leader, Somen Mitra, and CPI(M)’s ex-MP, Sujan Chakraborty, concurred with Ghosh.