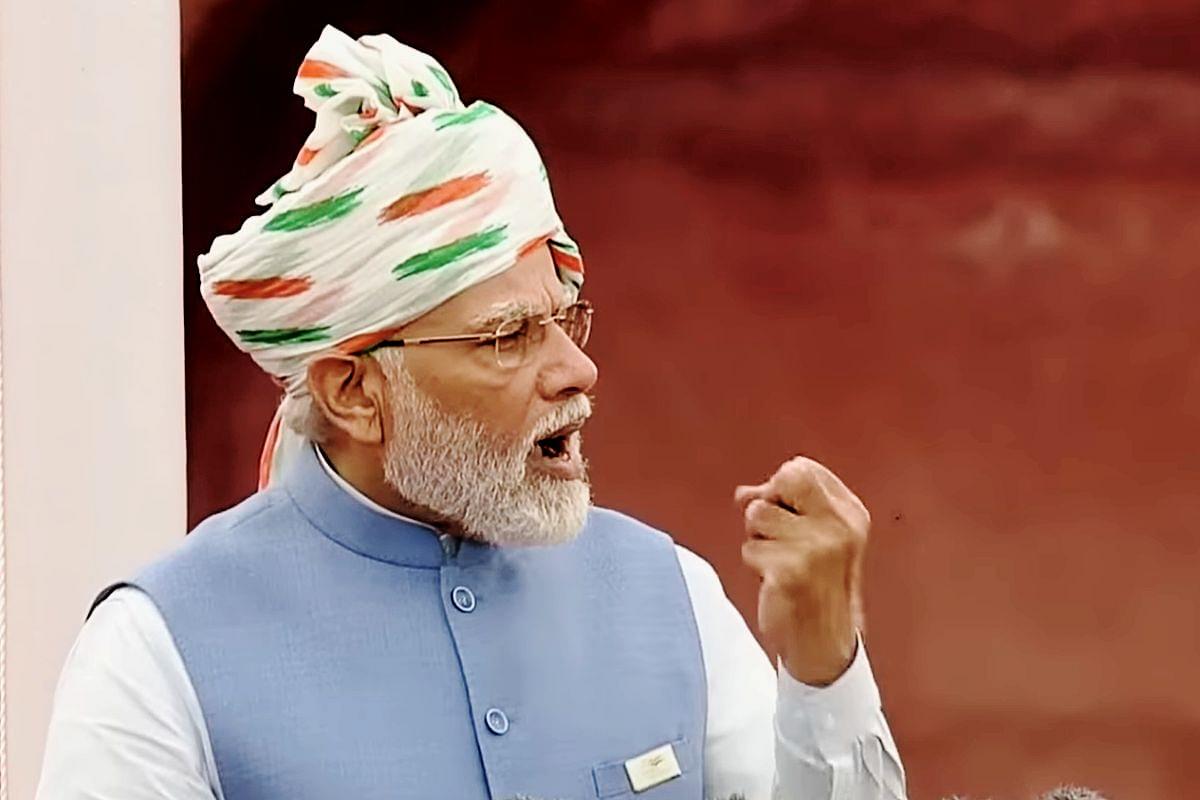 Prime Minister Narendra Modi at the Lal Qila on 15 August.

I was recently asked what I thought of the the Panch Pran (five pledges) announced by Prime Minister Narendra Modi during India’s 76th Independence Day speech.

I have not listened to the speech, but from newspaper reports, I gathered it was about "getting rid of the colonial mindset and servitude".

So, the question was: given my writings on colonial consciousness, how would I make sense of this from within the framework of my research programme, the Comparative Science of Cultures? These are some thoughts.

My hypothesis on religion includes characterising the dynamics of its expansion. As I see it, such a dynamic includes (a) conversion and (b) secularisation.

The first side of the dynamic, ‘conversion’, is well-known to most of us: here, some religion or the other inducts ‘non-believers’ into its fold or into its community of believers and practitioners. (I also called it ‘proselytisation’, a term that notices how Judaism and Christianity use ‘proselyte’.) The second side of the dynamic, ‘secularisation’, is known to us only very partially.

Made popular since the Enlightenment period in Europe, this partial description identifies an antithetical movement where an individual religion begins to lose traction in its spheres of influence: the civil organisations and the civil authorities.

This classical story is about the withdrawal of religion from various domains in society: politics, law, judiciary, and so on. In this ‘age of reason’, it is suggested that human reason begins to govern these institutions and provide their foundations instead of religious opinions and dogmas.

One of its consequences is the loss of the power and control of the church on the state. Called ‘secularism’, this process indicates the waning power of religion on people and their imaginations, especially by freeing the civil, the social, and the psychological spheres of human beings and society.

The freedom from those shackles that enslaved them over the millennia made human beings and their societies grow and expand.

‘Indian secularism’ (both as a vacuous doctrine and in the threadbare ‘foundation’ it received in the Indian Constitution) expresses this faith and this conviction in an extremely pathetic form ever since (or even decades before) Indian Independence 75 years ago.

My story, while giving credence to the hostility it expresses, locates the ‘secularisation process’ as another side in the expansion of religion.

Secularisation is antithetical to the expansion of some religion or another, but it expands religion itself as a phenomenon in a culture or society.

These very specificities, that lend identity to some or another religion, act as constraints on religion, which is, as I characterise it, the explanatory intelligible account of the cosmos and itself.

This account is the truth about all that was, is and shall be. This truth is not only in the world but religion, as such an account, exhibits that truth.

Thus, religion, as religion, expands itself while this or that specific religion expands through conversion. Both, taken together, are moments in the expansion of religion.

Even though secularisation of religion is a general process, how this process occurs is determined by the conditions of emergence of a specific religion and how that religion converts.

That is, how religion secularises itself is subject to the nature and constraints that the specific religions face.

Thus, the secularisation of Judaism, Christianity and Islam occur differently even where each of them undergoes secularisation as a moment in its expansion. In each of these religions, secularisation is inimical and hostile to a particular religion because of the specificities that give us an individual religion.

In ‘What does it mean to be an Indian?’ I said that Indians were children of two colonialisms: one coloniser was Islam and the other was the British. This means that religions too colonise. I did not expand on the idea in that book (you must wait for the upcoming works to grasp the idea more fully), but I will briefly outline only one element of this colonising event.

It is true that Islam tried to convert Indians and it is also true that it did so violently. While Islam launched many waves of destructive attacks on Indian traditions, their temples, and practices, etc, we were not colonised by this aspect or phase of Islamic expansion.

It is in the nature of religions, Christianity and Islam, to convert through extremely violent means when conversion is directed towards larger populations and established cultures.

Judaism, after around fifth century CE, almost stopped conversion. There are various reasons for this cessation, none of which is relevant for my story here.

I have already noted that secularisation is inimical and hostile to religion. What does it mean in our case? It means that the secularised Islam that colonised us was hostile to Islam as a religion.

Among other things, it means that it is hostile to Islamic doctrines as well. How? In very simple religious terms: secularised Islam is blasphemy (within the framework of Islam as a religion). What does this mean?

According to Islam, Allah is the Lord and the Ruler of the Universe. As the word ‘Islam’ indicates, it demands an attitude of absolute submission and total surrender to Allah and his will.

It requires a complete obedience to him; human beings must follow his rules and laws unconditionally. In its phase of conversion into a religion, Islam tried to inculcate this reverential attitude and habit towards Allah among the converted.

In its secularising moment, secularised Islam reversed this thought and attitude entirely and gave it a blasphemous form: among Indians, it inculcated and induced such a habit and attitude, not towards Allah, but towards human rulers. Secularised Islam put human Muslim rulers of India above Prophet Mohammed and placed the same rulers as Allah’s equals.

This is how secularised Islam expressed its antithetical attitude to Islam as a religion and expressed its hostility towards Islam.

I have claimed that colonialism transforms the experience of people and prevents the colonial subjects from accessing it in any form other than how the coloniser defines it.

This inability to access our experience is what I call ‘colonial consciousness’. This is what secularised Islam also did: it introduced slavishness and servitude into Indian psychology.

Centuries of this colonisation made a slavish submission to civil authorities the hallmark and an important trait of Indian cultural psychology. In very simple terms: Indians became slavish, submissive, and servile to civil (ie, human) authorities.

The British noticed this psychological trait of Indians and said that Indians were ‘effeminate’ and had ‘no backbone’.

Though this is what all the Bengalis were in their eyes (after all, Bengal was one of first important ports of call to the British), very soon, all Indians joined the group of a servile people.

That is why they went in search of ‘military’ castes in their attempts to recruit Indians to the British army.

They found such ‘castes’ among the Sikhs and the Marathas (both of whom fought the Muslim rulers over long periods) and the Gurkhas (who were least subject to secularised Islamic rule). They found it among some ‘sub-castes’ as well: the Coorgis in Karnataka belonged to the ‘martial type’. The rest of India was too effeminate to be of much use except to slavishly obey the British authorities and lick their boots.

How Indian child-rearing practices and the socialisation processes in India succumbed to cultivating servility in Indian children because of Islamic colonisation has not been understood yet. But that is not relevant to this story now.

When the British ‘gave’ India her independence, the Indian servility did not disappear. It continues to be produced and reproduced even today.

If we look at how Indians relate to civil authorities, we see this servitude everywhere. The bureaucracy, the police, the ministers receive obsequiousness without demanding it.

They punish those who dare ‘defy’ them. This is not merely how ordinary Indians relate to political and administrative authorities: this is institutionalised within these organisations too.

This servitude, often called sycophancy, goes all the way to the very top. This is how Indians are seen abroad: whether by the Chinese or in the West. Obsequious, eager to please and servile.

This cultural psychology expresses our colonial consciousness as induced by Islamic colonisation.

Very recently, a few weeks ago, I read somewhere that Rahul Gandhi fulminated against the Indian foreign service officials thus: Indian diplomats are seen to have become arrogant by others elsewhere in the world (due to Modi’s government).

This perception makes sense: Indian diplomats are not any more as servile as they were in the last 60 years. They continue to have this psychology, but they do not express it as ‘the normal’ anymore. There is much, much more to say than what I have. The story is bigger, broader, and richer than what I have penned so far. But I will round-off here.

The phrase that combines ‘colonial mindset’ and ‘servitude’ makes sense within my research programme this way. It tells me how one colonialism has generated one aspect of our psychology. This attitude and orientation are in us and are with us even now and will have their own poisonous and deleterious impacts on the development of the Amrit Kaal that the Prime Minister spoke about. I have no clue what the PM intended or meant.

This is merely an attempt to see whether the idea makes sense within my research programme. It does.

However, the implications are gigantic: both for pursuing the pledge (the pran) and to fulfil it in the Amrit Kaal that the Prime Minister seeks. They have their own pernicious effects on the current programmes of the government and all its future policies.

I must apologise for the brevity. You must wait for the upcoming works to understand this story properly.

(Prof SN Balagangadhara is Professor Emeritus at Ghent University, Belgium. His life’s work has been about decolonising the social sciences as an intellectual project spanning multiple generations. His most recent book is, What does it mean to be Indian?, written in collaboration with Sarika Rao.)

SN Balagangadhara is a professor at the Ghent University in Belgium
Get Swarajya in your inbox everyday. Subscribe here.
Tags: