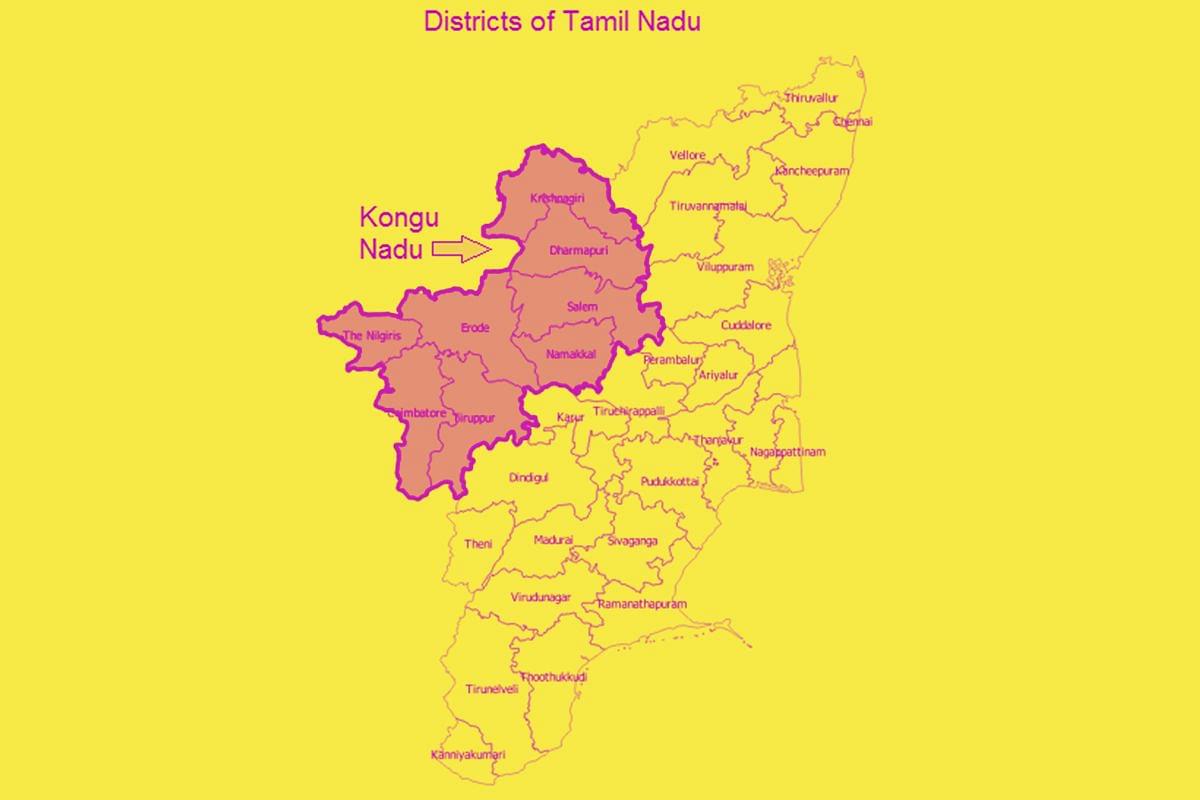 The Kongu region of Tamil Nadu.

Some mischief-makers working within the power corridors of New Delhi set the Tamil Nadu Twitter sphere on fire early this week. In some of the official announcements, they had chosen to call 'Kongu Naadu' instead of the name of the district or town from which L Murugan, the newly-anointed Minister of State, comes from.

Kongu Nadu (or Naadu) is the name by which the western districts of Tamil Nadu go by. These districts have a distinct identity within the broader Tamil socio-cultural landscape just as other regions of ancient Tamil ‘country’ have. The name itself has largely been used only in a cultural context except when fringe players use it to demand a new state.

Kongu Nadu is a prosperous, industrialised, entrepreneurial region of the state whereas other regions are seen as increasingly less developed, but willing to embrace industrial activity.

With Chennai-based governments pushing a lot of investments and factories around the state capital region, the Kongu districts have been feeling left out for a couple of decades now.

Unlike Chennai, the Kongu districts carved out a pie for themselves in textiles, machinery, heavy industries, power equipment and a host of other industries without a great deal of state support. They have managed to hold their place despite the ports being farther away.

This prosperity is in turn driven by the occupants of the region — the Kongu Vellala Gounders (KVG) and other entrepreneurial communities. These also form the bulwark of the All India Anna Dravida Munnetra Kazhagam (AIADMK) in the region. Kongu Nadu has never been fully swayed by the Dravida Munnetra Kazhagam (DMK) — it elects DMK candidates only during wave elections and that too with the thinnest margins in the state.

Ever since the chaos following J Jayalalithaa's death and the takeover of the party by Edapadi Palaniswamy (EPS), a KVG himself, the region has further dug-in in support of the AIADMK. Of the 57 seats in the region, the AIADMK won 40 seats in the 2021 elections, a strike rate of 70 per cent.

But it is not the AIADMK that rakes up Kongu Nadu's alleged victimisation at the hands of DMK. It is the AIADMK's main ally the Bharatiya Janata Party (BJP) cadre that chose to play the separate state card. Even within the BJP, it is only the online supporter ecosystem that uses the term Kongu Nadu.

These supporters have long been beleaguered by the much stronger social media presence of DMK. The larger DMK ecosystem always made it a point to trend hashtags such as #GoBackModi during Prime Minister Narendra Modi's visits to the state. The DMK's stranglehold over the state's media outlets also makes it impossible for the BJP supporters to register their counter-arguments on controversial topics such as the medical entrance examinations (NEET).

For its part, the BJP support base has tasted limited success in the recent past — they even managed to get a large number of users to tweet #GoBackStalin when the newly-elected Chief Minister from the DMK visited Coimbatore, the capital of Kongu region. Coimbatore had not elected a single DMK MLA after all.

That there were many days during which Chennai was delivering 10,000 plus Covid-19 vaccines while Coimbatore could only get 500-800 shots, also came in handy for the BJP to snipe at DMK. What is useful to know is that it was not AIADMK which won 40 seats in the region that flagged this vaccine allocation discrepancy in the assembly. It was a BJP MLA. The Chief Minister had to make an intervention and promised to treat Coimbatore fairly.

It is in this context of DMK losing badly in the region and of allegations of discrimination beginning to sound serious that the reference to Kongu Nadu in an official statement has happened.

Expectedly, it set the social media threads on fire. Nobody really believes that a separate state is a possibility nor is there going to be a serious demand for one in the short term. Nevertheless, for the BJP it is quite a useful stick to beat the DMK's ecosystem once in a while.