Q and A With Shankkar Aiyar: What Does The Biographer Of Aadhaar Think Of It? 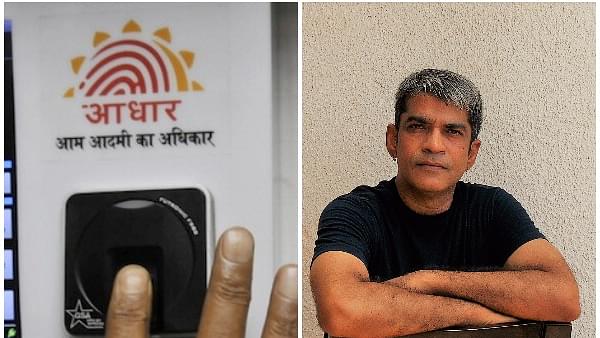 Aadhaar: a biometric history of India’s 12 digit revolution is Shankkar Aiyar’s second book after the much acclaimed Accidental India. It would not be wrong to see his latest work as a tell-all biography of arguably the most important government project in the history of independent India. The book traces the journey of Aadhaar from the time it was an idea to its growth as a mega public project.

Such a book becomes all the more relevant at a time when debates around Aadhaar are drawing sharp and numerous reactions. A ‘biography’ of Aadhaar establishes that it isn’t a project of a party or a single leader, or even a mundane ‘sarkari’ endeavour. Rather, it is a platform created by bipartisan efforts which can potentially change the relationship of the Indian state with its 1.2 billion and counting citizens.

But, ‘how did Aadhaar see bipartisan support in a polity like India?’ ‘How was Nandan Nilekani’s leadership of UIDAI different to what a bureaucrat would have provided?’ ‘How did PM Modi turn into a champion of Aadhaar after having publicly opposed it?’

All these questions, and some more, answered here by Shankkar Aiyar in a conversation with Swarajya.

Do you believe leaders from India’s principal political parties – beyond ideological grandstanding – see merit in the idea of Aadhaar, especially as a tool for delivering welfare and services?

The fact that two national parties, with divergent dogmata, invested political capital on the idea of Aadhaar, and enabled the creation of the world’s largest identification platform with 1.15 billion identities, is evidence of a rare commonality of purpose. For decades trillions of rupees were spent but governments struggled to deliver benefits and services to intended persons – this was accepted right from Rajiv Gandhi’s famous 15 paise per rupee statement. The bipartisan belief is driven by an acceptance of the need for an instrument that would enable delivery of welfare. For efficacy it needs to be backed by systemic reforms, adequate infrastructure and a law for data protection and privacy.

Getting Nandan Nilekani to spearhead the Aadhaar project was clearly a case of inspired selection. What was the special expertise he was able to bring to this project?

The choice of Nandan Nilekani was critical – and this is validated by Manmohan Singh, Pranab Mukherjee and indeed, leaders across the political spectrum. Nilekani attracted talent for the project and brought to the table the ability to catalyse collaboration between those in the system and those from outside. His ability to think out of the box led to the design of the hour-glass architecture which deploys identification at the base and enables applications on top for targeted delivery of subsidies, for enabling access to services to delivery and for financial inclusion.

If Aadhaar had been driven by the Babudom, how different would this have been? Would it have been just a scheme rather than a transformative platform?

If we step away from the qualitative assumptions and examine history it is evident that previous attempts to create identification platforms – voter ID cards, BPL cards and – did not quite take off and/or were afflicted by fakes and fraud. The question is of approach. Aadhaar as conceived in the government in January 2009 is vastly different from Aadhaar as designed by Nilekani, R S Sharma and team. The problem is governments tend to complicate the design of programmes. Nilekani and the team of techies kept the design simple, avoided top down procurement models and chose a collaborative model.

As someone largely perceived as a status quoist minister, what explains Pranab Mukherjee’s embrace of a disruptive idea like Aadhaar?

Perceptions are frequently misplaced. The Modi Sarkar, for instance, does not subscribe to the idea of privatisation – and this stems from a political rationale. Surely that doesn’t make it status quoist. For the record, Pranab Mukherjee as finance minister in the 1980s opened up foreign investment in the equity market, shepherded India’s transition from GATT to WTO as commerce minister and as defence minister initiated the process of inducting private investment in defence production following Kelkar Committee’s Report. In a political economy as complex as India context determines policy stance – realpolitik not blind ideology paves the way forward.

In your book, Pranab Mukherjee surprisingly emerges as an energetic champion while Chidambaram is seen to be more enthusiastic about the Multi-Purpose National Identity Card scheme based on the National Population Register.

Pranab Mukherjee led the EGOM on UIDAI. As finance minister he had come to believe the need for it and championed it. P Chidambaram had taken over as home minister post 26/11. He raised the flag on issues of security, legality, due diligence and clarity on the NPR scheme. He was on board once issues were settled in January 2012 in a meeting with prime minister Manmohan Singh. Indeed, post July 2012, as finance minister, Chidambaram championed Aadhaar and its expansion to a slew of welfare programmes. The fact is any new policy, certainly one as disruptive as Aadhaar, comes stapled with ministerial conflicts - of rule, turf and control.

Would it be fair to say that the only way to implement transformative programmes is to keep them out of the ambit of bureaucracy?

It is critical to uninstall one size fits all formulas. Form must follow content, structure must follow need. The successes in the nuclear and space programmes show it is possible to engineer structures within government to make things happen. What is required is an adaptive approach. Aadhaar showed it is possible to have a start-up in government to implement advanced technological platforms. Increasingly problems of governance demand deployment of technology. So besides the generalists there is need for specialists. It is imperative that India finds way to induct talent laterally – as do many nations – to design and incubate new ways to resolve seemingly intractable problems.

The NDA government proposed a multi-purpose national identity card idea and initiated a pilot project. For all practical purposes, UPA-1 just abandoned the project. Was it because NDA's project was conceptualised more as a national security measure rather than as a welfare delivery mechanism?

Enabling identification is at the core of both the multi-purpose national identity cards and Aadhaar. The MNIC was born out of the review of internal and external security post the Kargil War. The birth of Aadhaar was driven by need to provide an instrument for the poor to claim benefits. The MNIC card project was proposed in 2003 and the first cards were issued only in May 2007 – during UPA 1 so it can’t be said it was abandoned. The reasons for the slow progress are known – complexity of the enrollment and the verification process – the MNIC card had 16 fields for demographic data versus four in Aadhaar. The registration of residents under the National Population Register is an ongoing process.

In your book you have a fascinating account of how Ram Sewak Sharma and Nandan Nilekani convinced PM Modi on the need to expand and build on Aadhaar. What would have been the clinching argument?

The clinching argument was the potential of the Aadhaar platform to deliver on multiple fronts. The PM was well aware of the potential of an identification platform – to address internal security, to curb corruption and leakage and to fix the broken welfare delivery system. There is also a political context. The Modi Sarkar came to power on the promise of Achche Din. To deliver on the promise it had to address issues in the economy. Remember crude oil prices were around $ 110 per barrel and subsidies bill was Rs 2.55 lakh crore. Aadhaar enables the idea of good governance.

Critics charge Mr. Modi of executing a U-turn on Aadhaar. But is that truly the case - because Gujarat was one of the states that made huge progress in Aadhaar enrollment?

As chief minister of Gujarat Narendra Modi had adapted and adopted Aadhaar in the state. Gujarat had designed a Know Your Resident Plus (KYR-Plus) format where the Aadhaar enrollment included additional information like BPL card number, Voter ID Card and Swasthya Bima details, LPG/Gas connection number etc. As the prime ministerial candidate Modi had attacked Aadhaar and even called it a “gimmick”. But as an administrator he knew its potential and took it forward. If you see the expansion of Aadhaar and its linkages it mirrors what he had installed in Gujarat.

Privacy has emerged as a key area of concern as Aadhaar increasingly enhances its footprint. Do you think doomsday scenarios of a totalitarian state are for real?

It pays to learn from history. Did anybody think Indira Gandhi, who was voted to power in 1971 with 350-plus seats, would impose Emergency in 1975? In its current form, the Aadhaar platform cannot be deployed as a snoop stall - unless government amends the law for a way to connect the linkages and the dots. This does not take away from the need for a comprehensive data protection and privacy law. Safeguards are required to be enshrined in letter as there is no guarantee that regimes will not turn vile. The focus is on Aadhaar but it is not just about Aadhaar. There is an urgent need for a law to protect zettabytes of data emitted by phones, laptops and connected devices --from those who hold the monopoly over coercive power and private colonisers who want to monopolise data. Privacy is about personhood, and is essential for democracy.

Some commentators have estimated that if Aadhaar be listed, it could be a $50-$100 billion company in 10 years. What are your thoughts?

I think Aadhaar is far more valuable, as a societal platform for transformation.