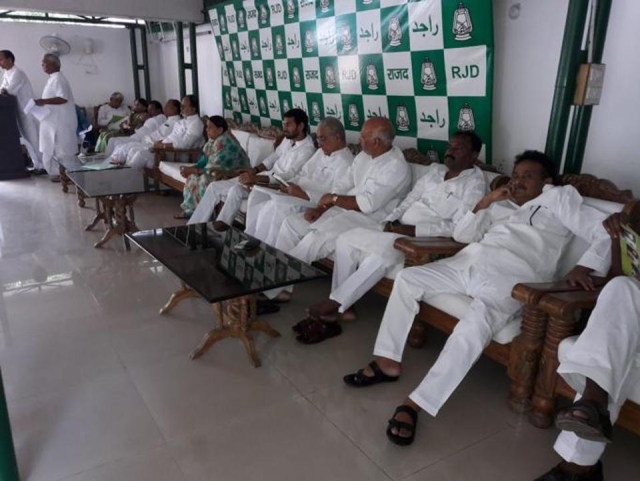 A day before Rashtriya Janata Dal (RJD) chief Lalu Prasad Yadav’s date for appearance at the Central Bureau of Investigation (CBI) headquarters in New Delhi, to answer questions related to what has come to be known as the ‘land for railways’ hotels lease’ scam, his wife and former chief minister Rabri Devi stepped on to the party centre stage.

On Wednesday, Rabri Devi convened and chaired an emergency meeting of party MLAs at her residence, which was attended by other senior leaders of the party, as well.

The ‘core agenda’ of the meeting was stated to be its organisational polls, what with the party having decided to convene a meeting of its national council to elect a new party president on 20 November.

Sources, however, said the essence of the meeting, at it actually unfolded, appeared more to send out a message of unity within the party ranks in the face of adversity, including the possibility of Lalu Yadav being arrested by the CBI.

In an FIR filed against Lalu Yadav and his younger son Tejashwi Prasad Yadav, the CBI has claimed that during his tenure as railways minister (2004-09) Lalu was instrumental in leasing out two railways hotels to private parties in lieu of valuable land in Patna.

The land came into the ownership of Tejashwi Yadav and Rabri Devi, subsequently, it claimed.

The crisis in the party is all the more grave as Tejashwi Yadav too is to face CBI questioning in the same case on 6 October.

Both Lalu and Tejashwi Yadav, camping in New Delhi for the last one week, have skipped dates to apppear before the CBI twice earlier and there are possibilities of their arrest in case they fail to adhere to the summons issued for the third time.

The unease was evident with Rabri Devi being tasked to address 80 party MLAs, along with district presidents, in an effort to keep speculation at bay. The message of unity was sought to be conveyed in the garb of launching new agitations to take on the Bharatiya Janata Party (BJP)-led National Democratic Alliance (NDA) ahead of the 2019 parliamentary polls.

Sources said, party strategists called the meeting knowing well that party chief Lalu Yadav’s absence in case of his incarceration in the ‘land for railways hotels lease’ scam case could come as a big jolt to the party and make party MLAs vulnerable to poaching by the ruling Janata Dal (United) and BJP.

The party is apparently putting in place safeguards to fend off any attempt of poaching of its MLAs, following reports suggesting a number of Congress MLAs might join the ruling JD (U) in the coming days.

RJD vice-president Shivanand Tiwari was confident the party would weather the storm. “Rabri Devi has steered the party in the past when Lalu was incarcerated . Those opposed to RJD are day dreaming that the party will fall apart,” he said.

RJD MLAs , district presidents and senior leaders attending the meeting discussed the current political scenario in the state, organisational matters and the strategy for the upcoming polls, sources said.

“The party is already running its membership drive and will hold elections of block, district , state and national president in a phase wise manner,” said Shakti Singh Yadav, state chief spokesperson of the party.

Union Minister Giriraj Singh and BJP state president Nityanand Rai, however hit out at the RJD, saying Rabri Devi had once again taken command of the party out of fear of the RJD chief and his younger son going to jail.