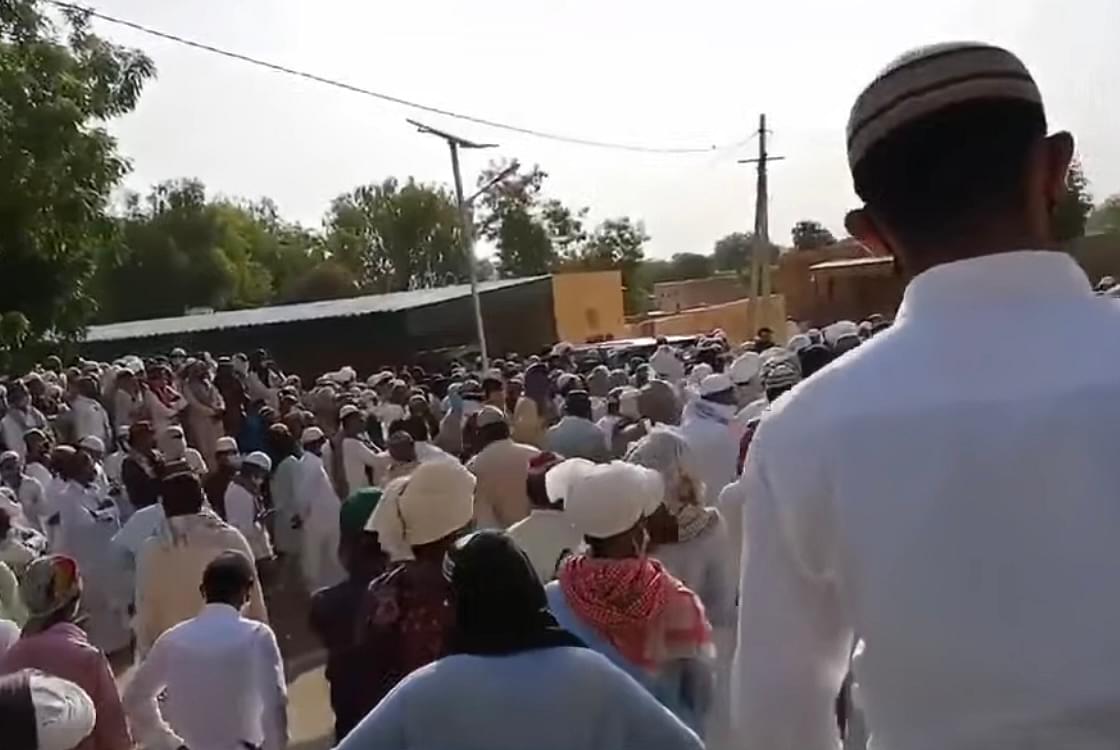 The gathering of Muslims for the funeral, despite Covid-19 protocols being in place.

A massive crowd was seen at the funeral of a Muslim leader in Rajasthan yesterday. The leader, named Ghazi Faqir, was 84. His son Saleh Mohammed is currently a cabinet minister in the Congress-led government in Rajasthan.

The crowds at the funeral of Maulana Gazi Fakir in Rajasthan a day ago. He was 84 and died of prolonged illness. His son Shaleh Mohammad is a cabinet minister in Rajasthan govt. Rajasthan is currently under curfew. pic.twitter.com/HqpDdIL1Z0

As per reports, Maulana Ghazi Faqir died of a prolonged illness. He was head of the Hur community, which is said to be about five lakh strong and is present in both India and Pakistan.

The shrine of Syed Mardan Shah, also known as Pir Pagaro, is based in Pakistan’s Sindh province. His death was also mourned in Pakistan, the report said.

He is survived by five sons, including Abdullah Faqir who has served as zilla pramukh of Jaisalmer and Saleh Mohammed who is Rajasthan minority affairs minister and is an MLA from Pokhran.

The family has been associated with the Congress party for long.

He was buried on Tuesday at his ancestral Jhabra village in Jaisalmer. He died at a hospital in Jodhpur. As per reports, Saleh attended the burial despite being Coronavirus-positive.

Ironically, Gehlot has been tweeting to citizens of Rajasthan to avoid gatherings and follow Covid-related protocols and guidelines.

In a post yesterday, Gehlot said that the virus was spreading fast in Rajasthan and the key reason behind it is the non-compliance of Covid-related norms by citizens.

Social media users criticised Gehlot on the crowd, questioning why his own ministers were flouting the norms.

.@RahulGandhi @priyankagandhi @ashokgehlot51 @SachinPilot @INCIndia In case you are done with giving sermons to Modi can you tell us how was it allowed? Can you let us know when will you shun VIP culture? Priyanka Gandhi hoards medicine for her brother & party has no regard 4 law https://t.co/0gubUaInE9

How many people are allowed to attend last rites in Rajasthan? Look at how #Covid guidelines were flouted in Jaisalmer when cabinet minister Saleh Mohammad, himself #CovidPositive , lost his father Ghazi Fakeer.
Will there be action against the minister? pic.twitter.com/H1Q5hzopTH

The state is under lockdown until May 3 citing “rising” cases. The state government, however, is calling it by a different name — Jan Anushashan Pakhwada (fortnight of public discipline).