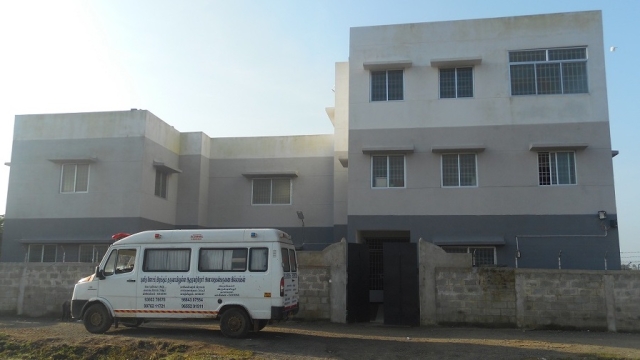 Aloof and away from the maddening crowd with no one nearby at Paleswaram village in Kanchipuram district, is the St Joseph’s hospice, a good two-hour drive from Tamil Nadu’s capital, Chennai. The isolated facility betrays the fact that it is in the eye of a storm, over the treatment of its old and ailing inmates and the disposal of their bodies after their death.

The hospice, whose licence renewal by the Tamil Nadu government is pending since September 2017, has been functioning from its current premises since 2011. The land on the banks of river Palar was donated, according to Porres, a volunteer at the hospice.

Nothing looked amiss or off-colour until the eventful day of 20 February that threw up questions on the functioning of the hospice. That evening, locals at Paleswaram village were horrified to listen to the cries of an old woman for help. Angered, the locals stopped the ambulance to rescue the old woman. But they were surprised to find the body of an old man in the ambulance beside vegetables for the inmates. The driver of the ambulance took to his heels, but the locals wouldn’t leave the matter there.

A hue and cry was raised over the issue, following which Kanchipuram Revenue Division officials led by its officer, (RDO) G Raju, landed at the hospice and began an enquiry into its functioning.

Authorities found a vault in which the dead were kept unauthorisedly. “The hospice disposed of the bodies of its inmates unauthorised. Inmates who die are buried in vaults built on its premises. Such disposal of bodies is illegal,” Raju told Swarajya.

The unearthing of vaults and locals’ complaints of stench from the facilities led to allegations of organ trade, which the hospice denied.

With some political parties and leaders raising concerns over the functioning of the hospice, it was revealed that its licence had not been renewed since September 2017.

“The hospice application for licence has been kept pending due to incomplete paper work. It has not provided any certification for sanitation,” says RDO Raju.

Following the concerns raised, the hospice’s nearly 290 inmates were shifted to government-recognised homes in Kanchipuram, Chennai, Vellore, and Villipuram.

Within a month of the inmates being shifted, at least a dozen of them have died. Government officials, who did not wish to be identified, said the deaths were due to old age and ailments.

But Rev V Thomas, who runs the hospice, wouldn’t agree with the official version on the deaths. He moved the Madras High Court seeking the handing over of the rest of the nearly 280 inmates.

On 28 March, a Madras High Court bench comprising Justices C T Selvam and N Sathish Kumar ordered the return of the inmates to the hospice while ruling on the petition.

The ruling has only complicated the issue further. Most of the inmates, lodged comfortably in various homes, refused to return, saying they were happy at the places they were housed in currently.

Why are the inmates refusing to return? It could be because they were not provided with proper food and clothing, says district social welfare officer Sangeetha. “They even felt lack of care and protection at the hospice,” she told Swarajya.

Medical facilities, in particular, were poor at the hospice. For every 35 inmates, who were all old and some immobile, there was just one helper to attend to them.

RDO Raju says the hospice had only eight helpers to take care of the nearly 300 inmates. Besides, food was not good at the facility, he adds.

Porres, who fears more inmates could have been dead in the last few weeks, confesses that the homes where the inmates have been lodged in currently, could be providing better facilities, including separate rooms – a valid reason for their unwillingness to return to the hospice. Inmates who can move around may choose to stay at the newly found homes that are providing better facilities, he says. The inmates lived in dormitories at the St Joseph’s hospice. “Only those who were confined to bed got accommodation in separate rooms,” he said.

The inmates’ reluctance to return put the Tamil Nadu government in a dilemma and it went back to the court on 29 March to report the factual situation.

Concerned over the developments, the High Court has now formed a committee to study the whole situation and report back to it. The committee began its work on 30 March. It will now meet each of the inmates who had been housed at the hospice, visiting all the places they are currently lodged in.

St Joseph’s Hospice would have no problem if some of the inmates do not want to return. “If they have a better place to stay, the hospice management has no objection to it,” says Porres.

Prabhakaran, the advocate who represented the hospice management, denies that the inmates do not want to return to the hospice. “The hospice is trying to rehabilitate inmates who are on the verge of death. Many of them do not even know what they are doing as they are aged and some are mentally ill. A few cannot even identify themselves,” he claims.

Neither RDO Raju nor Social Welfare Officer Sangeetha would want to discuss further on the issue since the committee has begun its investigation.

For now, the inmates could be breathing free. But what lies in store for them in the future depends on the report the committee submits. Till then, concerns over their future remain.