RJD Fed Off The Congress In The 1990s; Can The Latter Repay Favour Now That Lalu Is In Jail? 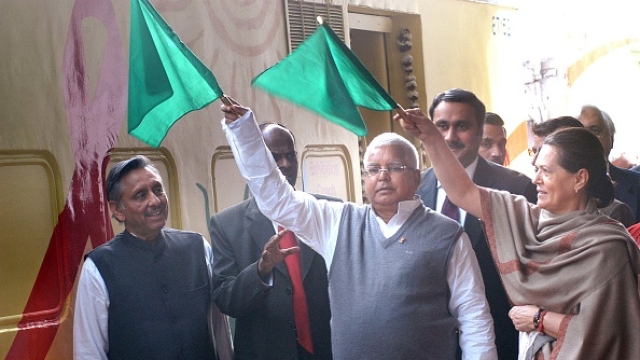 Lalu Prasad Yadav, the former chief minister of Bihar, is jail-bound again. He was convicted, last Saturday (23 December), by a special Central Bureau of Investigation (CBI) court for his involvement in a criminal conspiracy to embezzle money from the Deoghar Treasury in undivided Bihar.

As a student and practitioner of law, I am not surprised. Generally, even courts with concurrent jurisdiction over similar offences committed across territories in a state prefer to go by the precedent set by the judgement that is earlier in time. This is the second of the six almost identical cases involving monies from six different treasuries that are pending before various courts in Jharkhand. Earlier in May, the Supreme Court nixed a disingenuous attempt made by Yadav’s lawyers to ensure that he somehow escaped punishment and trial in the five other cases since he had been convicted in 2013.

There are certain immediate ramifications of the verdict. The first obviously is that he will have to go to jail for now and would not be able to participate in the rough and tumble of Bihar politics, of which, thanks to the alliance between the Bharatiya Janata Party (BJP) and the Janata Dal (United), he was one of the principal poles. Next, the prospect of him getting a stay on the operation of this judgement or qua his earlier conviction for that matter, which would have enabled him to contest elections to the Lok Sabha or the Vidhan Sabha, has dimmed even further.

With Yadav in jail, there is also the prospect that his sons and daughters shall now get involved in a brutal fratricidal war of succession given that his voter base is, as on date, pretty much intact. Already there are murmurs in informed circles in Patna that Yadav’s son Tejashwi Yadav’s stature as the chosen political heir is something that Tej Pratap (technically older than the former) is unable to stomach. Add the vaulting ambition of Yadav’s daughter Misa Bharti to the mix and you have a situation reminiscent of Neil Gaiman’s cult classic Stardust. The family patriarch might not even get bail very soon this time round, as this is the second case for which he has been convicted. Since the Supreme Court had in May directed the CBI courts to conclude trial within nine months, we ought to be prepared for more convictions in the coming weeks and months.

The BJP and the JDU can and should obviously be sitting pretty. It is clear that Yadav’s vote share is going to splinter further as the party goes into a state of inevitable civil war with family retainers like Abdul Bari Siddiqui and Co, assuming partisan roles with one faction or another. It is also amply clear that if the BJP and the JDU stick together, then they shall clearly have another spell in power in 2020. It is also extremely unlikely that the Rashtriya Janata Dal (RJD) will recover in time for the next election. Where does this leave the perennial third wheel – the Congress party?

Counter-intuitive as this may sound, this is the best possible opportunity for the Congress party to make a bid for revival, especially in Bihar. The opposition space in Bihar is now wide open and is waiting to be occupied. As explained earlier, there is also the possibility that the RJD might now splinter into more than a few factions. There are unfortunately some well-wishers of the Congress party (with friends like that, who needs enemies!) including some with whom I had a rambunctious exchange on prime-time Republic TV recently, who feel that Yadav and the Congress party are natural allies because both the parties share a commitment to ‘secular’ values and that the Bihar strongman has always stood by Sonia Gandhi through thick and thin. Unfortunately, this is an absurd argument that is neither rooted in logic, nor, for that matter, in contemporary political history.

Those of us who have been following Bihar politics since the late 1980s when the Congress party was swept out of power on the back of the Mandal agitation, would know that Yadav’s politics was never really ‘secular’ to begin with, and at the beginning of his career, his primary foe in Bihar was the Congress party. Now that he feels that the Grand Old Party has given up the ghost in Bihar, he has no compunctions about making deals with them at the national level.

Sample one of the utterances made by him on the floor of the house in 1989 when he was a member of Parliament and a few months away from being inaugurated as the chief minister of Bihar and the Congress party.

(Extracts are sourced from here).

“It is the Congress that has engineered most of the riots... Rajiv Gandhi failed to protect Harijans and Muslim. Geographical boundaries of the country were jeopardised by the Congress and Rajiv Gandhi...”

“Satyendra Narain Sinha became chief minister of Bihar, he failed to quell the riots in Hazaribagh... the procession of Ram Navami had passed off peacefully in front of the Jama Masjid of Hazaribagh. No Muslim had opposed the procession.”

“Ram shila procession and Ram Navami procession passed off from there, but neither there was any riot nor anybody raised provocative slogans on that day. But later on an incident took place in Hazaribagh which triggered off disturbances in the entire state.”

“Rajiv Gandhi, accompanied by his wife Sonia Gandhi, went to participate in the Vaishali festival. They had put on bulletproof vests... Shri Rajiv Gandhi told Sonia Gandhi that he himself would drive the jeep to see the celebrations.”

“Forces were picked up from Hazaribagh and sent to Vaishali. After three days riots took place between Hindus and Muslims. But no security forces were there to control the situation.”

“They (the Congress) have spared no effort to put Bhagalpur, BJP, RSS and Janata Dal to disrepute”, “One thousand workers belonging to the Congress Party were called to Bahera by Maithili Brahmins and were asked to wear caps bearing slogans ‘Garv say kaho hum Hindu hain" and "Radhe Shyam Baba ki Jai’”.

“You try to understand the actual position in Bhagalpur... Shiv Chander Jha, who was the speaker, was deadly against Bhagwat Jha Azad (A Congress party leader and father of Kirti Azad). It was due to them and a few of their men that these riots... (interruptions)... they were behind these riots.”

History stands testimony to the fact that when he did become chief minister, Yadav spared no efforts in ensuring that the guilty parties in the Bhagalpur riots, almost all of whom were his caste brethren, were never punished. It is also true that his ‘secularism’ is a convenient political expedient that he adopted once he realised that the Congress party was going to be out of the picture in Bihar and he needed the Muslim vote to offset the gains that the BJP had made after the Ram temple movement.

The big question now is whether the Congress party will exhibit the courage to walk the talk and break ties with the RJD and start gunning for the RJD’s vote bank just as the latter fattened itself at the expense of the former at the dawn of the 1990s. This might even win them supporters in the rest of the country if they are seen to be taking a tough stance against corruption. They are quite obviously not going to win Bihar in 2019 or, for that matter, even in 2020. However, to my mind, going from an irrelevant member of the Opposition coalition to the main opposition party is also an improvement. And as Sir Humphrey Appleby tells us in Yes Minister, the Opposition is also the government in waiting.

Having said that, I will not hold my breath. I have full faith in the utter pusillanimity of the Congress party’s brains trust. Rahul Gandhi contested the election on his steam in Bihar in 2010 and has seven or eight seats to show for his efforts. I don’t think the psychological scars have healed as yet, and frankly I don’t even think he is mentally tough at all. However, if and only if he can find the courage to do the unthinkable, something akin to the gamble that the BJP took with Narendra Modi in 2014, there is a realistic chance of the Congress returning to its salad days in Bihar and for Yadav and his brood to be rendered irrelevant – a development that I would be glad to cheer.