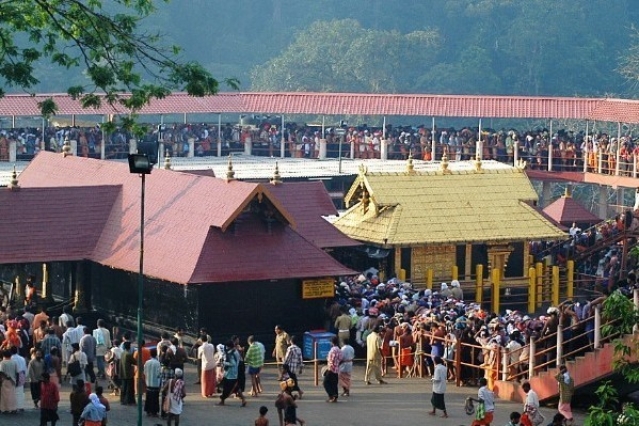 The irony in the 4:1 Supreme Court decision that forces the Ayyappa temple at Sabarimala to open its doors to women in the 10-50 age group is this: the four male judges who wrote the majority judgment claimed to be fighting for gender equality, while the lone woman judge, Indu Malhotra, dissented and batted for religious freedom as promised under article 25 of the Constitution.

What the majority verdict specifically struck down was Rule 3(b) of the Kerala Hindu Places of Public Worship (Authorisation of Entry) Rules, 1965, which was the basis on which women in the menstruating age were barred from the temple since the presiding deity was celibate.

While the four male judges, Chief Justice of India Dipak Misra, and justices A M Khanwilkar, D Y Chandrachud, and R Nariman, pontificated about equality under the law, Justice Indu Malhotra underlined a simple truth: that looking for matters of rationality in matters of religion is futile.

She noted that deep religious sentiment should not be interfered with by courts, unless there is truly an aggrieved party bringing attention to the same. She also emphasised that the deity, the celibate Swami Ayyappa, and the practices around him, were protected under article 25 of the Constitution.

The moot point is whether the practices at Sabarimala fall within this definition of freedom of conscience or not. The majority decreed they did not; only Justice Malhotra said they did.

(2) Nothing in this article shall affect the operation of any existing law or prevent the state from making any law (a) regulating or restricting any economic, financial, political or other secular activity which may be associated with religious practice; (b) providing for social welfare and reform or the throwing open of Hindu religious institutions of a public character to all classes and sections of Hindus.”

An honest reading of Section 25, and how it has been interpreted in this case and many others, shows that the promise of freedom of conscience applies to all religions other than Hinduism. Explanation 1, for example, specifically says that “The wearing and carrying of kirpans shall be deemed to be included in the profession of the Sikh religion.”

If the Constitution has to treat all as equal, why not allow all to carry weapons like Sikhs?

So, exclusions from constitutional provisions are possible only if you are not a Hindu. Articles 25-30, which protect the autonomy of minority religious, clearly form an institutionalised system of discriminating against Hindu religious practices.

Consider the kind of pontification the Supreme Court justices indulged in while delivering the majority Sabarimala judgement.

CJI Misra said that “Devotees of Ayyappa do not constitute a separate religious denomination”, which set the stage for treating Sabarimala on a par with other temples. A Bar and Bench report said that Justice Nariman concurred with Misra, holding that the custom of barring the entry of (menstruating) women from Sabarimala Temple is violative of Article 25(1) of the Constitution of India.

Justice Chandrachud, who seems to have taken on himself the job of righting all wrongs in society, had this to say: “Religion cannot be cover to deny women the right to worship. To treat women as children of a lesser God is to blink at Constitutional morality.”

Nobody told him that one exceptional temple with its own norms on barring women of a certain age from entry does not represent the whole of Hindu temple practices.

Nobody also seems to have enlightened him about the emphatic claims of all Abrahamic religions, that those who do not believe in Christ or Allah or Yahweh are essentially children of a lesser god. So, should these beliefs be outlawed too under the constitution?

Even earlier, during the hearings stage, Justice Chandrachud was clear on which way he would decide. Among other things, he had observed that the “essentiality principle”, enunciated in a 1950s five-judge bench decision involving Shirur Mutt, was a “problem with our jurisprudence.” He disagreed with the essentiality principle, since it compelled judges to be guided by a theological interpretation rather than the basic non-discriminatory nature of our Constitution.

It was left to Justice Malhotra to bring some sanity to this pontification. “What constitutes essential religious practice is for the religious community to decide, not for the court”. She also dissented with the majority opinion and held that Ayyappa devotees do form a separate denomination covered under article 25 (1).

Justice Malhotra is the true heroine in the Sabarimala miscarriage of justice. The court is too drunk with its own sense of fighting for equality and justice to understand that differentiated practice is not always discrimination.