Saraswati River: Reality, Not A Myth 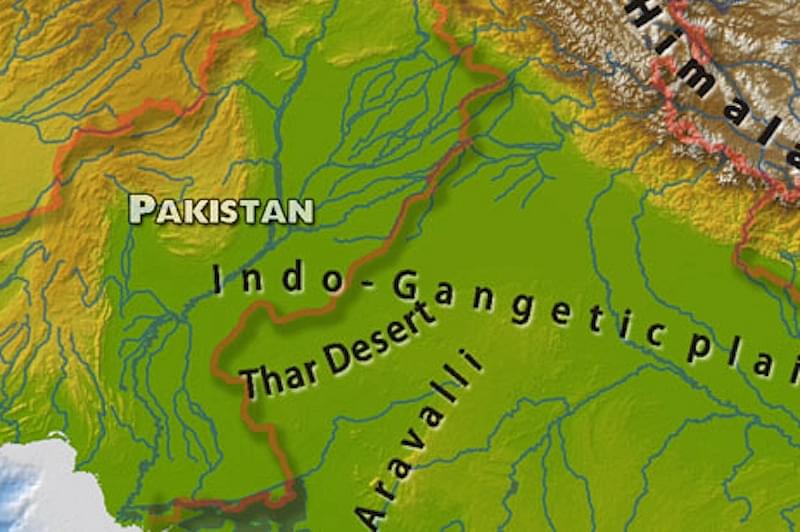 Concrete scientific evidence proves the existence of Saraswati river.  The only fact worthy of debate is whether or not the Haryana government’s investment for the resurrection of the river is justified.

The river Saraswati was recently in the news for a couple of reasons: one, a stream of water gushed out from a depth of 7-8 feet on digging in Mugalwali, a village near Adi Badri, Yamunanagar, Haryana. Two, the BJP government in Haryana, in a maiden project, commissioned Rs. 50 crore for the revival of the river. Also, a check dam stretching across 400 acres proposed on the Somb river will be diverted to the Saraswati river channel.

The BJP government acted fast, and the media sprang into action right away. Saraswati is one of the dishes on the BJP’s platter. Today, the theory is being sold by the media, both mass and social. While the general debate on the river is catching up in the background, the use of the word ‘mythical’ in articles and posts contradicts scientific findings. Let’s delve into the history and geology of Saraswati for a panoramic view.

The existence of Saraswati is certain. The river valley was a site of flourishing civilisations, which subsequently assimilated in the modern Indian culture. The real scientific debate hinges only on technicalities.

Mentioned in the Vedas as the “best” or “foremost” of rivers, it has been quoted as “pure in her course from mountains to the ocean.” It is called the Ambitame, Naditame, Devitame – the Best of Mothers, Best of Rivers and Best of Goddesses in the Rig Veda.

Sanskrit texts are full of references to the river:

(Additionally, Saraswati has also been referred to as Goddess of Knowledge. Students and teachers alike across the nation pay their respects to the Goddess of Knowledge on an auspicious day in the month of February each year. The day is commemorated with a puja in various academic institutes, hostels and homes.)

Prof. A. R. Chaudhary at the Department of Geology, Kurukshetra University, has been working extensively on the subject for years and has established a Saraswati Research Lab. In a detailed discussion with him on the same, the following points came to the fore:

Civilisations develop on the banks of rivers where cities and villages grow, setting the stage for trade and commerce. This happens precisely when nature is conducive to their growth.  The Indus valley civilisation (IVC) that flourished in the Northern and North Western India was among the oldest civilisations in the world. The IVC has been rightly mentioned in research findings as Indus  Ghaggar-Hakra Valley civilisation (Ching et al, 2006) and Indus Saraswati civilisation by scientists.

Such references form the cornerstone of a predictable relationship between the Saraswati and Ghaggar-Hakra river systems. Numerous scientific findings have successfully shown that a river existed and flowed in Haryana in the Holocene epoch, prior to the 10th century BC. The only debatable aspect is the reach of this river and the later recession of its channel.

To understand the entire gamut of debatable contentions, one needs to understand the tectonic history of the Indian plate. The Indian tectonic plate, with force derived from Mantle convections, detached from the Gondwana and started sailing northwards. It came into contact with the Eurasian Plate around 90 million years ago when the continental shelves of the Eurasian and Indian plate collided.

Around 45-60 million years ago, the Himalayas were created and uplifted due to the collision of continental crust of Indian and Eurasian plates. The recent Kathmandu earthquake and other minor and major earthquakes in northern India are a result of the accumulated subsurface energy that finds a weak spot for release. The understanding that such earthquakes and tectonic events can force major structural changes in the course of rivers is important.  After all, it’s the Himalayas that gave us the Brahmaputra, the Ganga, the Indus and other rivers. There can be no definitive limit on the might of the Himalayas and underlying processes!

The presence of many prehistoric and IVC sites: Haryana has numerous sites, whose origin can be traced back to the IVC. Recently, Rakigarhi has been established as the biggest IVC site. This fact becomes intriguing when one considers how the civilization sustained itself, and that there are no perennial rivers in present-day Haryana.  Channels near Markandey are filled with little water only during monsoons.

Geological discoveries can help us find the answers:

Dating the sediments:  Dating of sediments and study of the heavy mineral suite from water both give confirmatory evidence of a large river channel. The heavy mineral assemblage analysis of the samples obtained from Kalayat, Haryana tell a tale of the origin of the minerals in the higher Himalayas.

Remote Sensing: Imagery and photographic studies have helped in deducing a vague paleochannel. This needs further substantiation by field evidence to finally determine the extent of the Saraswati.

Most of all, the highly venerated Hindu scriptures describe Saraswati at length.

CF Oldham, a scholar of the Victorian period, pioneered the study of the presence of a mighty Himalayan river in the North Western alluvial plains, which desiccated due to drainage readjustments. He inadvertently tried to link the Vedas with geology. Subsequent signatures of paleo-drainage have been worked out by many geologists since then. Hitesh Chaudhari (2007,2008) recorded tectonic signatures of the quarternary drainage readjustments which resulted in the transformation of major rivers into streams.

With evidence based on sound hydro-geomorphic analysis, Saraswati has been proposed to be a large paleo river of Himalayan glacial origin. In 2009, S. K. Tandon and H. S. Saini showed the sub-surface sedimentary architecture of the area to be a network of river channels much larger than the present-day drainage.

Hence, as rarely as it happens, archaeological findings here do fall in line with scientific research. Now, is the investment for the revival of the long-lost river justified? The answer to this question is subject to debate and judgement.