#SayNoToCowardice: Why Gandhi Has Nothing To Offer While Dealing With Jihadi Terror 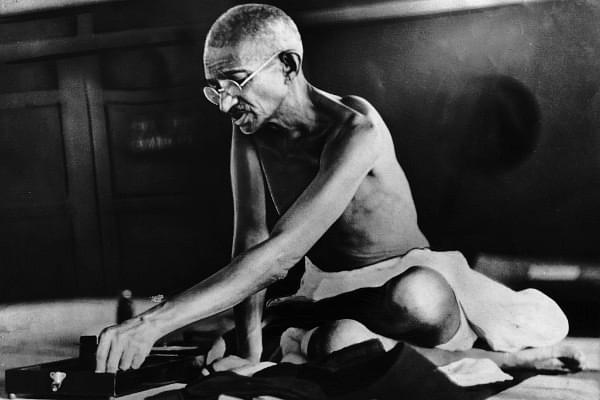 The hashtag #SayNoToWar was one of those trending yesterday (27 February), no doubt promoted by those who would like to divide and weaken the will of the nation. This trend began soon after Pakistani tried to up the ante by sending F-16s to target our military assets, an attempt foiled by the Indian Air Force. It was supposed to be an attempt to flex Pakistani muscle following pre-emptive strike against a Jaish-e-Mohammed terrorist training camp in Balakot, Khyber Pakhtunkhwa.

Crocodile tears were also shed for Wing Commander Abhinandan Varthaman, whose MiG-21 landed in Pakistani territory after being crippled. The same group suddenly shifted to whining about Abhinandan’s capture, when the man himself is shown in a video as behaving with dignity and pride. His ancient MiG-21 downed a more modern Pakistan F-16 before it went down in Pakistani territory. Instead of saluting his valour, we are encouraging breast-beating of the most abhorrent type. The trend collapsed in a day as India’s resolute stand forced Pakistan to announce the release of the Wing Commander, but that’s another story. The bluff of a bankrupt nation, hemmed in by negative international responses to its threat to raise the nuclear spectre, was again forced to blink.

The purpose here is to discuss the hashtag #SayNoToWar. It was cleverly chosen, for few people in their right minds will say the opposite, that they want war. It was a blatant attempt to paint those rooting for India as warmongers. The obvious counters to the misleadingly labelled #SayNoToWar hashtag include the following: #SayNoToJihad, #SayNoToDhimmitude, or, simply, #SayNoToCowardice. When you are attacked repeatedly by terrorists, and you have been largely restrained and have refused to retaliate for three decades, not doing anything is cowardice, plain and simple. Turning the other cheek is an insult to the hundreds of Indian armed forces personnel who lost their lives defending our country. Whining in the name of Wing Commander Abhinandan amounts to the same. He will be brought back with honour once this crisis blows over.

The efforts to denigrate India’s pre-emptive strike on the Jaish terror training camp on 26 February saw yet others playing the Pakistani game. They railed against 'keyboard warriors’ and 'warmonger’ TV channels, as if there aren’t 'keyboard peaceniks’ to match those alleged keyboard warriors and warmongers. The same people who dislike the appellation 'Urban Naxal’, or otherwise keep criticising the Indian armed forces, are happy to dismiss those supporting our armed forces in their difficult fight against terrorists by sticking this pejorative label on them.

Another tweet by a journalist exhorted everyone, “Let’s think what Mahatma Gandhi would have said…#SayNoToWar.”

This is silly. Quite apart from the fact that Gandhi himself was never consistent in his pacifism – he won a medal for service to the British in South Africa’s second Boer war – the real point is whether India needs to use only Gandhi as a reference point in everything it does to protect itself from jihadis. Why not quote Shivaji, Netaji Bose, Khudiram Bose, Bhagat Singh and Chandrashekhar Azad in this context? When the enemy is at the door, do you play martial music or sing bhajans?

But it is part of the 'secular’ effort to rubbish nationalists and genuine patriots by quoting Bhagat Singh for his interest in Leninism and Communism, and Netaji for his socialist credentials rather than his nationalist Azad Hind Fauj. No one will mention that Gandhi opposed both of them. These heroes will never be cited for their refusal to accept non-violence as a creed. There is no better way to destroy India’s will to resist jihadi violence than by using Gandhi when he is not relevant here; there is no better way to kill the Indian spirit than to refuse to quote those who took the violent route to achieve freedom.

As for Gandhi, he will never be quoted by the secularists on the three things he consistently believed in: cow protection, Ram Rajya, and non-conversion.

Coming back to non-violence, it isn’t as if even Gandhi advocated it in all situations. Here are two quotes from him that tell us the opposite.

Gandhi said: “I would risk violence a thousand times rather than risk the emasculation of a whole race.”

If India has so far given the jihadis a free run in the name of acting with restraint, we are essentially living out Gandhi’s fears about the “emasculation of a whole race”.

Gandhi also said: “I do believe that, where there is only a choice between cowardice and violence, I would advise violence... I would rather have India resort to arms in order to defend her honour than that she should, in a cowardly manner, become or remain a helpless witness to her own dishonour. But I believe that non-violence is infinitely superior to violence, forgiveness is more manly than punishment. Forgiveness adorns a soldier... But abstinence is forgiveness only when there is the power to punish; it is meaningless when it pretends to proceed from a helpless creature...”. (Italics mine)

Despite Gandhi’s loud preference for non-violence, if you read the whole text he clearly says that it is only those who can punish who can afford to forgive, not those quivering helplessly in the face of jihadi terror. In the last three decades, when Pakistan adopted the strategy of sending low-cost jihadis to bleed India with a thousand cuts, no phrase described India better than the one Gandhi gave it – “a helpless witness to her own dishonour”.

But despite these concessions Gandhi made for permitting some violence in order to avoid cowardice, we need to make a broader point that Gandhi was wrong. Passivity, non-violence and turning the other cheek are about personal morality. You can choose to face death and violence stoically by personally choosing non-violence as your creed. What you cannot do is inflict this choice on an entire nation, reducing it to a blabbering mass of dhimmitude.

Gandhigiri is, in any case, the wrong weapon to use against jihadi terror. It failed Gandhi himself. He backed the Khilafat movement to the hilt, but those who accepted his leadership when the fight was for a doomed Caliphate, dumped him when it failed. From the ashes of Khilafat rose the new jihad for a separation and Partition in 1947. We should not fall for it again.

Gandhi was morally and ethically wrong to make his personal predilections the default choice of the nation. We need to discard this in order to rise as a nation.