Stability Of Karnataka Government Under Doubt: Another Day In Office For Kumaraswamy 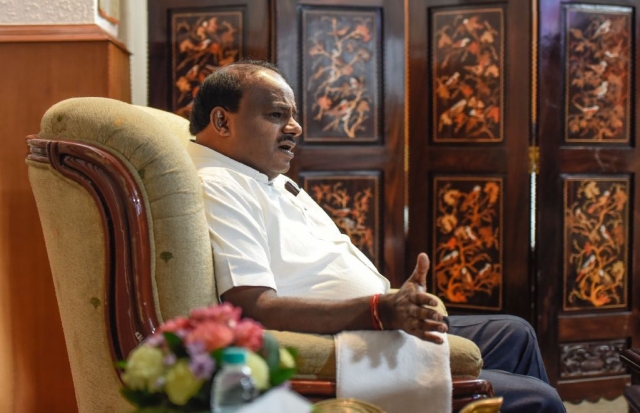 The coalition woes in Karnataka do not seem to end, and since the past week, there has been talk that the Congress-Janata Dal (Secular) or JD(S) government in the state is likely to collapse soon.

It began with, five Congress legislators went missing, only to be revealed later that they were in Mumbai.

There was further trouble after two Independent MLAs — H Nagesh and R Shankar — pulled out of the government stating that there was no coordination in the coalition. Nagesh said that he would rather be a part of the Bharatiya Janata Party (BJP) which could provide a stable coalition.

Chief Minister H D Kumaraswamy, however, appeared to be unfazed. He said that he was enjoying all that is going on while adding that his government is safe. The Congress too, according to this report, said that it would take six BJP MLAs if there is any problem.

The BJP, on the other hand, is taking no chances and carted its MLAs to a resort in Gurgaon. While sources say that this was done to protect them from poaching, the official version was that they were holding a strategy meeting ahead of the 2019 Lok Sabha elections.

In the 224-member assembly, the Congress has 80 MLAs and the JD(S), 37. One BSP MLA and two independents also constituted the coalition. The BJP, on the other hand, has 104 MLAs. In order to bring the government down, at least 14 MLAs will need to resign to bring the house strength down to ensure that the BJP forms the government.

Going by the numbers, it appears to be a herculean task ahead for the BJP. Even if the five missing MLAs resign and the BJP adds the two independent MLAs, the party would still need seven more on its side.

The question now is whether this entire exercise is about toppling the government or shaking the coalition ahead of the Lok Sabha elections in Karnataka, which sends 28 representatives to the Lok Sabha. Going by the developments, it is clear that these are mind games that the BJP is playing.

According to this author’s sources, while many in the state unit of the BJP are looking to form the government, the leaders at the central level are not keen. The central leadership feels that such adventurism is not necessary at this moment as it could have an adverse effect in the 2019 polls. The idea would be to continue playing mind games and ensure that more MLAs come out of the coalition, which in turn would force the Governor to keep the House under suspended animation until the elections.

The central leadership is keen that the state unit must begin preparations for the Lok Sabha elections right away. There are meetings scheduled in New Delhi to get the poll strategy underway. However, a section within the state unit feels that the poll campaign should get underway only after the Karnataka government is toppled.

The next few days would be crucial, and a lot would depend on how the coalition handles the situation. In front of the cameras, Kumaraswamy does look relaxed, but the five missing MLAs would surely worry him.

For the Congress, it would be D K Shivakumar who would lead the team to sort out the crisis. He would visit Maharashtra and hold talks with the MLAs apart from taking part in an official event in Aurangabad. While he would hold talks with the MLAs, he has been instructed by the Congress leadership not to bring them back to Karnataka as yet. Shivakumar, according to source, who did not wish to be named, said that his party too had some tricks up its sleeve and that all these days they were not indulging in politics but now they would.

The five MLAs, who have been out of reach are largely upset about being left out of the cabinet. The Congress would look to accommodate them in a bid to pacify them. Although their resignations may not bring down the government, for the Congress it would prove to be a major embarrassment as it would set off a chain of similar events by disgruntled elements.

The Congress is understood to have pacified four of its ministers to resign if the need be. This would become necessary if the disgruntled MLAs do not budge on their demands and insist on a ministerial berth.

The BJP on the other hand would play a wait and watch game and see the drama within the coalition unfold. However, more importantly for the party, it would quickly need to get into poll mode and lay out a plan to fight the 2019 elections. Unlike 2014, the BJP is most likely to be up against a Congress-JD(S) combine and the fight would not exactly be an easy one.

For now, the central leadership has told its state unit to play a wait and watch game, instead of creating trouble within the coalition. Many within the BJP feel that the lifeline of the coalition would anyway be only until the 2019 polls are over.