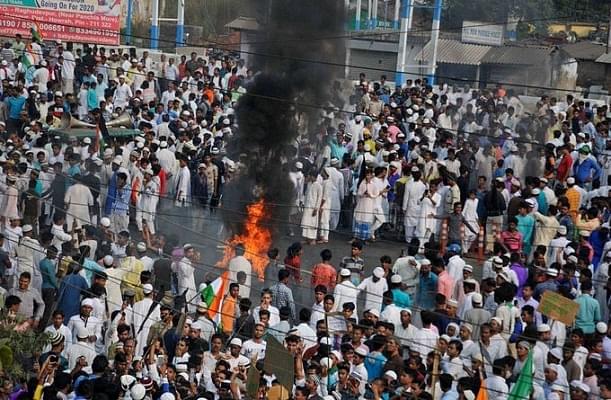 The violent and staged protests against the Citizenship Amendment Act (CAA) in mostly Muslim-dominated areas of Kolkata and the rest of Bengal seem to be backfiring on the Trinamool.

Visuals of angry mobs of bearded men in skull caps and lungis protesting, raising slogans and going on a rampage have gone viral on social media. And that has triggered huge outrage.

The protests could not but have been stage-managed, or at least covertly blessed by the Trinamool. The CAB was enacted by Parliament (hence, it is the Citizenship Amendment Act now) on 11 December (Wednesday).

Bengal, unlike Assam and other northeastern states, did not witness any protests in the run-up to the introduction of the legislation in Parliament. It was well-known by all that the BJP-led NDA was determined to bring in this legislation.

Thus, the sudden eruption of the protests in Bengal on Friday, two days after the Bill was enacted, defies all logic.

It is widely suspected that Friday’s (and Saturday’s) violent protests were at least blessed by the Trinamool to prove its point that not just Assam and some other parts of the Northeastern region, but many other parts of the country are also up in arms against the CAA.

The torching of the Beldanga railway station in the Muslim-dominated Murshidabad district by rabid mobs of bearded men in skull caps and lungis was shared and viewed by lakhs of people.

So were visuals of trains being stopped and pelted with stones, and air-conditioned coaches being damaged.

Many video clips of Muslim men taunting and terrorizing hapless passengers cowering in fear in coaches received millions of hits. Many such passengers shared their harrowing accounts on social media, triggering more outrage.

Video clips and photographs of Muslim men damaging locomotives and other railway property, beating up the driver of a locomotive, blocking highways with burning tyres and raising angry slogans received millions of hits and condemnations.

The fact that the demonstrations and violence started after sermons by maulanas in mosques during Friday namaz was not lost on the people of Bengal.

It also didn’t take long for people to figure out that only railway property was attacked and damaged, and state government as well as private properties were left untouched.

Many netizens commented, and received widespread support, for pointing out railway properties were targeted since the Indian Railways is owned and operated by the Union government, which is led by BJP.

“Had the protests been spontaneous, the targets would not have been so specific. Trucks, buses and other vehicles on the roads would also have been attacked and  state government and private properties would also have been targeted. But by targeting only railway property, the mobs made it amply clear they were instructed to do so,” said a senior BJP leader.

The BJP was quick to point out that the protesters on Friday were predominantly Muslims. Comments (on social media) like “this is why NRC is required in Bengal” accompanying the clips of violence received millions of likes and endorsements.

What also caused huge outrage was the fact that except in Kolkata, where the protesters were mostly Urdu-speaking, those in the rest of Bengal spoke in Bangladeshi dialects.

The video clips contained audios of the protesters speaking to each other in those dialects, thus arousing suspicion that they were mostly of Bangladeshi-origin and, hence, have reason to fear the NRC updation exercise.

What is more diabolical is that, as if to prove that the protesters on Friday were not selective in their targets, they attacked private buses and police vehicles (along with another railway station) on Saturday.

However, once again, the violent mobs comprised predominantly Muslim men.

Thus, the outrage has not only continued, but also intensified. That the state administration, and the police force, remained mute bystanders while the Muslim men rioted was not lost on the people.

Millions have questioned the state’s inaction and have wondered if the inaction was due to the fact that the mobs were predominantly Muslim.

By attempting to show that people of Bengal are also against the new Citizenship Act, Trinamool supremo Mamata Banerjee has only strengthened her ‘Muslim-appeasement’ credentials. The devious ploy has backfired.