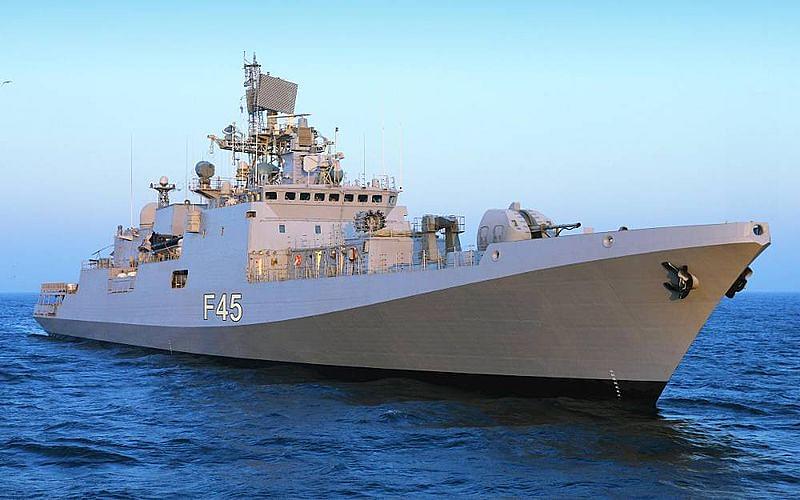 The Talwar class frigates will play a key role in India’s new Maritime Strategy 2015 that aims to dominate the blue waters and strike on land.

High octane defence deals are often the most exciting part of India-Russia summits. Not surprisingly, global attention is focused on the S-400 missile defence system and the PAK-FA stealth fighter during Prime Minister Narendra Modi’s current visit to Moscow. However, if India ever goes to war, the first strike is likely to be dealt by the Krivak III (Talwar) class stealth frigates.

India and Russia are circling around a $3 billion contract for new Talwar class frigates. In line with the Modi government’s Make in India push, the production of these frigates will involve an Indian partner, most likely Pipavav Shipyard owned by the Reliance Anil Dhirubhai Ambani Group.

Sword Arm Of The Navy

Frigates are small when compared with top of the line destroyers, but as the Russian Navy proved in its ongoing war against the Islamic State, small ships armed with long-range missiles can deliver a knockout blow early on in a conflict.

India had earlier procured six vessels of this class in two different batches and has been very pleased with the performance of the 4000 tonne state of the art frigates which pack a lot of firepower in comparison to their size.

Opinions differ as to Talwar’s stealth capabilities. According to Global Security,  these missile frigates represent the cutting edge of technology in stealth, reach and punch-

They have ushered in highly automated integrated weapon platforms that are essential for blue water operations by the Indian Navy. Commissioning of these new frigates not only enhances India’s defensive potential at sea but also dramatically affects the power equations in Asia.

However, Defense Industry Daily (DID) believes the Talwars are not full-on stealth warships-

They’re best described as mid-range multi-role frigates, with some stealth features and a potential emphasis on anti-submarine work…

In his book, ‘The Sea Power of the State’, Admiral Sergei Gorshkov, who transformed the Russian Navy into a global force, wrote:

Naval warfare aimed directly against land targets will play an ever greater part in any future major conflict.

The Indian Navy’s experience in striking land targets with small missile boats suggests the Talwars could be a game changer in the next conflict. In the 1971 War, India’s Russian built boats had set fire to Karachi in the first days of the war.

On the night of 4 December, 1971 – just 48 hours after the war started – the navy’s Osa class missile boats carried out their first attack on Karachi. But owing to a mix of confusion and lack of coordination, only a couple of Styx missiles were launched towards Karachi. Still, the boats sank two Pakistan Navy warships and crippled a third. They also destroyed a Pakistani merchant vessel bringing ammunition from an American depot in Saigon. Had the missile boats released all their missiles, the destruction could have been massive.

The navy launched a second attack on Karachi on the night of 8 December. This time, it lost one ship, INS Khukri, but the rest rained hell on the city, with the Styx missiles setting fire to the tanker farms and lighting up the night sky. Karachi burned for a week. Admiral S.M. Nanda described it as the “world’s biggest bonfire”.

Despite their spectacular performance, the vessels proved to be a logistical nightmare. Because of their short range, the boats had to be towed by tugs all the way from their Mumbai base to the rendezvous point near Porbandar, Gujarat.

Also, the crews had to experience heart stopping moments during the attack. The Pakistan Navy’s advanced shore based radars – provided by the Americans – spotted the Indian missile boats as soon as they entered the harbour. This alerted the Pakistani coastal defence units. Consequently, after firing their missiles, the Indian boats had to make a hasty retreat as Pakistani ships and shore-based aircraft were looking for them. Lacking speed – because they were meant for coastal defence rather than hit and run attacks – the Osa’s barely made it to the safety of Indian waters.

The Talwars being partly stealthy and won’t be easily detected by enemy radar. Equipped with self-defence guns, missiles and chaff, they won’t be as defenceless as the Osas either.

What gives a modern warship teeth are its missiles – in the Talwar’s case it is the partly supersonic Klub missile. This sought after missile is the export version of the 2500 km range Kaliber which Russia used with devastating effect against the Islamic State as well as US-backed terror groups in Syria.

Although the Klub version’s range is limited by the Missile Technology Control Regime (MTCR) to 300 km, it is more than enough to strike at coastal targets from well within international waters. Plus, if the frigates are provided cover by carrier based MiG-29s or land based Su-30 MKIs, then they would be able to strike from even closer range.

The interesting fact about the Klub’s flight is that for the majority of its trajectory it travels at a high subsonic speed. Initially the missile flies at an altitude of 30-45 feet above the sea surface. Approximately 60 km away from the designated target, the Klub descends to 15 ft and accelerates to supersonic speed before smashing into the target. Because of their immense kinetic energy, Russian missiles of this class have cut warships into half during testing. It also makes them almost invulnerable to defensive counter measures.

Some of the Talwars will eventually be equipped with the even more potent BrahMos missile. Because they are built by an India-Russia 50-50 joint venture at home, the Indian Navy is assured an endless supply of these supersonic missiles.

As far as range is concerned, the Russians may well spring a surprise and offer India the longer range Kaliber version. This may not be as farfetched as it sounds. The Russians have often ignored western protests and offered India their latest defence technology.

For instance, Russia’s NPO Mashinostroyenia provided the supersonic engine for BrahMos in complete secrecy to circumvent sabotage by the West. BrahMos Corp CEO A. Sivathanu Pillai reveals in his fascinating book ‘The Path Unexplored’  that NPO Mashinostroyenia also provided crucial assistance in the development of the Akash surface to air missile and a number of other areas in missile development. Similarly, Russian assistance with India’s heavy lift GSLV rocket is too well documented to be repeated here.

In keeping with MTCR guidelines the BrahMos was limited to a range of 300 km. But according to the company the next generation of the missile will not be limited by the discriminatory MTCR. A 1000 km range supersonic BrahMos would allow the Indian Navy to destroy hardened Pakistani military targets within the first few minutes of a war. The ensuing destruction would be an order of magnitude greater than what the US Tomahawks wreaked in downtown Baghdad in 2003.

And now the bad news

The only potentially problematic issue with the Talwar deal is the ship’s engine, which is built in Ukraine. Initially, the Ukrainians refused to work with Russia, but subsequently are said to have agreed to supply the engines if they are meant for use by the Indian Navy.

Ukrainian involvement could be a tricky affair. The engines will need to be serviced at some point in time and if Ukraine is flat broke or simply decides to play spoiler – at American instigation, in order to make Russia look unreliable – the Indian Navy could be staring down the abyss.

A major crisis involving Ukraine erupted in April 2015 when the Ukrainians – believe it or not – lost five AN-32 transport planes belonging to the Indian Air Force. These aircraft were part of a batch of 40 AN-32s that had been sent to Ukraine’s state-owned Ukrspetsexport for upgrades and refurbishment.

The remaining 64 An-32s were to be upgraded at the IAF’s Kanpur air force base, under a technology transfer from Ukraine, but the planned upgrade was halted as Ukrainian engineers departed and supplies of spare parts stopped.

A diplomat from the Ukraine embassy told the Indian side that the IAF must resolve this issue with Ukrspetsexport, and that the Ukrainian government “cannot help”. Financial portal Zero Hedge comments: “We wonder if that rather unhelpful attitude has anything to do with India not imposing sanctions on Russia.”