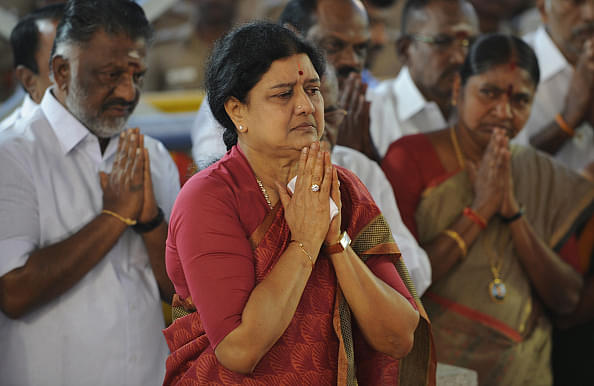 Sasikala and Panneerselvam along with party workers pay their respects at the memorial for Jayalalithaa after Sasikala was elected party general secretary in Chennai. (ARUN SANKAR/AFP/GettyImages)

“Power, is a curious thing, my Lord...Power resides where men believe it resides; it's a trick, a shadow on the wall, and a very small man can cast a very large shadow,” tells Varys to “Little Finger” in one of the many memorable verbal duets in the “Game of Thrones”.

An erstwhile video-shop owner and an erstwhile tea-seller are casting their long shadows on Tamil Nadu politics. They executed the transition of power last month after the death of former Tamil Nadu chief minister J Jayalalithaa so clinically that a case study should be written on it and taught in political science classes.

If capturing power is appropriating symbols then it was a tour de force from V K Sasikala - from standing by Jayalalithaa’s coffin through the day like what Jayalalithaa did after MGR’s death; asking to be addressed publicly as “chinna-amma”; making ministers fall at her feet; having Jayalalithaa’s photo ‘preside’ over a meeting, where her ascension was supposedly approved ‘in spirit’- and many such theatrics. But the biggest heists were the land-grab of the iconic Poes Garden residence and then becoming the general secretary of the All India Anna Dravida Munnetra Kazhagam (AIADMK). (The actual heist, in the commonly used sense of the word, is unknown!) She become the party general secretary, and made it look as if she accepted the post in response to a plea from the cadres to fill the vacuum. She made scores of volunteers visit her at the grand residence and “force” her with the “order of love” which she "could not morally refuse". The cronies obliged by calling her the “conscience” and the “shadow of amma”, making her look both motherly and as the reluctant messiah. (Now, one can also guess why Deepa Jayakumar, the niece of Jayalalithaa who looks a bit like her aunt, was disdainfully prevented to pay respects.)

Behind the scenes, it was ruthless power play. In the last hours of Jayalalithaa’s life, AIADMK members were allegedly asked to line up to sign blank sheets of paper and then transported en-masse to the party headquarters where a resolution was passed to make O Panneerselvam as the Chief Minister. The show swiftly moved to Raj Bhavan for the oath taking. That she did not lose her calm in the high voltage moments is commendable - a lesser person would have fallen for the avarice of taking on the Chief Minister’s post. She knew how the public perception of her is not all that positive and her appropriation of the chief minister’s post will lead to a suicidal vortex of negativity.

The perfect foil was O Panneerselvam (OPS), who is no pushover as media is projecting him to be. He used his moral authority as the chosen-by-amma one. The powerful visuals of the mid-night oath taking will be etched in people’s minds. He retains all powerful portfolios that Jayalalithaa had. He and Sasikala brought complementary strengths to the table. He had the saintly image (the white-beard and vibhuthi-smeared) that was loath to power broking. She had the actual power in terms of money and cadre backing. This metastable equilibrium brought about by circumstances is what Tamil Nadu is hanging by. Journalists from Delhi have made a poor analogy with Manmohan Singh (MMS) and Sonia Gandhi, but OPS has more play in the game than MMS.

This partnership will stay as long as both understand their weaknesses. The fragile equilibrium will shift to instability if Sasikala begins to feel insecure or if OPS tries to consolidate power through goodwill and good governance. Problems will arise when there is one-upmanship. The reason for the unease in late December was the clever attempt by OPS to consolidate his alliance with the central government. The bonhomie he enjoyed with Prime Minister Modi and an interview by Venkiah Naidu reiterating the centre’s support for “the elected government of state” caused much consternation.

Stage is also set for the eagle-eyed Amit Shah who revels in such circumstances. But the first salvo from BJP was fired by Prime Minister Narendra Modi who sent a strong signal with the raid on former Chief Secretary Ram Mohan Rao that the centre will not passively brook corruption. This hits on the core operational strategy of Sasikala. The first risk for Sasikala is that the mansabdari system that she has set up has to be managed properly for the arrangement to thrive. When the riches of the spoil (taxpayers’ money and power of office) are distributed away, the ensuing disgruntlements have to be assuaged tactfully.

BJP has done its first round of flirting with the AIADMK cadre. The Prime Minister has already invoked his personal friendship with Jayalalithaa. People have been reminded that their Amma had aligned with BJP in 1998 and 2004. In the coming months, the roles of the BJP Prabhari to Tamil Nadu, the state president and the governor all become more important in the action packed scenario. The looming disproportionate assets case against Sasikala can upset the balance of power quite decisively.

The caste base of leaders poses the second risk. Both Sasikala and OPS are from the Thevar community, that is the strongest support base of the AIADMK. But Panneerselvam is a mass leader from the Thevar belt near Madurai constituting Periyakulam, Theni, Usilampatti, Vattalagundu etc. The Gounder community leaders like Thambidurai, Thangamani, Sengottaiyan and Velumani have agreed to a play a role in the second rung of the pyramid. If they feel short-changed they can break away and will have willing partners in the many Kongu parties. BJP has realised that due to the lack of a magnetic leader within its ranks, it is best to align with the Thevars. The Thevar community has a history of fierce nationalism. They were staunch supporters of Netaji Subash Chandra Bose during the freedom struggle.

But social engineering is very difficult in Tamil Nadu for two reasons. One is geographic distribution of caste; caste groups are spread out except for a few pockets. Secondly, no party has totally appropriated particular castes. The Vanniyar group is a classic example; they are spread over a few districts in north Tamil Nadu. Though the Paatali Makkal Katchi (PMK) sees them as their main support base, there are Vanniyar leaders in all parties.

The third risk is governance and public perception. With the lack of a strong leader and corruption rearing its ugly head, governance is going to suffer. Sasikala’s very-extended family and loyal officers at perhaps every level of the government, have to be kept on leash. The ultimate practitioner of “access politics” will be tested in her own game. If Panneerselvam can deliver on governance and improve his power position, it will not just improve his stature, counter intuitively, it will also unsettle the balance of power and cause the system to crumble taking him along. The swift clean-up in the aftermath of cyclone Vardah earned him many kudos and sent a few jitters in the party. The path of least resistance is for him to expand the fiscally-demanding Amma schemes. With policy taking backseat to competitive politics, there are doubts that Tamil Nadu will retain its preeminence as an economic powerhouse.

The survival of the AIADMK government depends on whether Sasikala and Panneerselvam manage to incrementally consolidate their positions without upsetting the applecart. Being shrewd players themselves they know that a systemic loss is nobody’s gain. If they manage the tightrope walk for the next two years that will be an achievement, given that the DMK consolidating behind its executive leader M K Stalin is constantly looking for cracks in the opposition. The first major event that could quell the tranquility will be the 2019 parliamentary elections. (But lest we forget the lessons from Archduke Franz Ferdinand and the First World War). There will no Amma to quell any dissent on ticket distribution. Forces beyond anybody’s control will be at play. (One can flippantly add that another source of risk for Sasikala will be her Tamil oration.)

Paradoxically, when images and symbols are appropriated, it runs the risk of people realising the deliberate copying from the past is only for usurping power, thereby weakening the very objective of the acts. While Sasikala, Panneerselvam, other ADMK leaders, DMK, BJP and others are watching each other, the voters of Tamil Nadu are watching them. And the Tamil people who love their drama would have finished their popcorn by 2019. It waits to be seen if they will vote decisively as they have always done.

It has been more than 40 days since the demise of Jayalalithaa. She is reminded of mostly by her pet schemes and posters in Chennai. (Now one can realise why the Congress named everything on the various Gandhis). Reading the eulogies, some of them so uncharacteristically glowing, a politician will think he/she can get away with many things. While she brought decisiveness and control, she has also been corrupt, destroyed institutions and instilled a culture of servitude. Maybe the innate human sympathy that death triggers blinds people of the dark spots. If one is asked to pass a good/bad judgement on a person that recently died, the assessment invariably tilts towards good. May be the politician knows that and hence feels no compunction in doing unsavoury things.

Nevertheless, it is undeniable that her’s has been a life of great endeavours. Her cadres hence worshipped her for the “Shakti”. She lived true to the words of celebrated Tamil poet Thiruvalluvar, who said:

If you are born (in this world), be born with qualities conductive to fame. From those who are destitute of them it will be better not to be born (236)