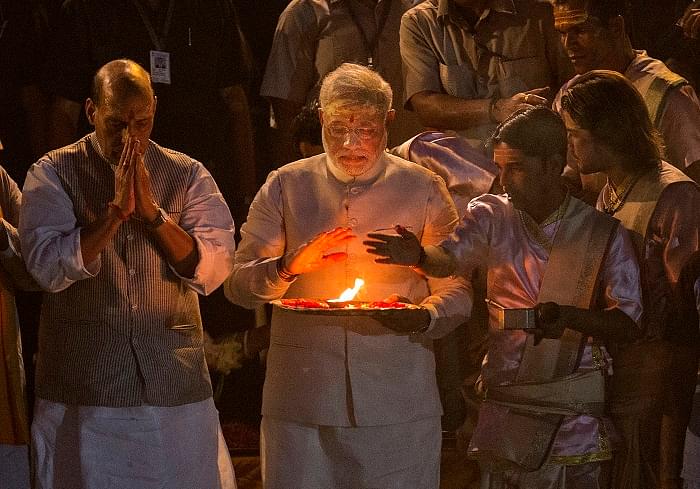 If the BJP now finds that it has disappointed its own supporters more than its mortal enemies, it is because the party has forgotten the most fundamental rule of success: you must play to your strengths, not your weaknesses. Trying to pretend to be what it is not is the surest way to defeat. When perceptions are the reality, you should leverage public perceptions to your advantage, not run away from it.

If Virender Sehwag became one of our greatest openers, it was not because he had text-book technique. He made it because he played to his strengths, and did not try to be another Sunil Gavaskar or Gundappa Vishwanath. He played like Sehwag and that is why he achieved true greatness. Of course, he had a weakness for playing risky shots that often got him out too early, but he could not have become great by focusing on fixing his weaknesses. He played to his strengths.

In their path-breaking book First, Break All The Rules, management writers Marcus Buckingham and Curt Coffman showed how great managers got optimum performance from staff by working to build their strengths and getting around their weaknesses. They never tried to fix what was broken in their stars, but they helped them focus on their innate talents. When it came to weaknesses, they tried to find ways to hide them or work around them. They could not be fixed. A weakness is as fundamental to a human being or organisation as is its strength.

This is what the BJP needs to understand. It cannot be what it is not – which is a “secular” party in the traditional Indian mould. Even if tries to be one, it will be repositioned quickly enough in the “communal” slot by its rivals. The BJP is a Hindu party, and this is the correct starting point for it. It does not have to thump its chest to claim it is a Hindu party, for that job will be done by its enemies.

The BJP should look at its current Hindu positioning as a strength rather than a weakness. Its challenge is to prove that its basic pro-Hindu nature does not make it inimical to the interests of the minorities. It will not be credible if it tries to pretend to be a secular party and thrusts a few Muslim faces before the public to prove this. No one is fooled by this tokenism.

If party chief Amit Shah were to make a statement about what the party is all about (or, more pertinently, what it should be about), this is the kind of statement he should make.

“Yes, the BJP is seen as a Hindu party, and we accept this definition. An important focus for us is to protect Hindu interests without in any way compromising or reducing the interests or rights of other communities.”

This definition does not make us sectarian, just as being an Indian Union Muslim League or a Majlis-e-Ittehadul Muslimeen does not make them so. Our definition flows from the simple fact that India is nearly 80 percent Hindu, and if you cannot protect the interests of 80 percent, you can’t protect the remaining 20 percent either. We should not forget that India is the only home of Hindus in a world where there are several countries for Christians, Muslims or even Buddhists. Hindus have nowhere to go if they cannot protect their interests even in India. The world would be a poorer place if Hindus feel marginalised even in India. The experience after 1947 shows that India is the final refuge for Hindus persecuted in our neighbourhood. So we cannot be apologetic about defending Hindu interests in India.

“This does not mean that the BJP will whittle down the rights and interests of our minorities, but we do admit that at this point of time, we do not adequately represent their interests. The BJP is open to progressive individuals from the minority communities joining it, and, will work constructively with existing Muslim and other minority parties to give them a sense of security and help then advance economically. Our slogan of “sabka saath, sabka vikas” means we will help the poor effectively without looking at the religion they follow.”

“The BJP is also committed to ensure justice to the victims of caste discrimination and gender biases. Being a Hindu party means working for all people we consider Hindus – and this means Dalits too. In fact, this is a priority for us from now on. We believe that we cannot even be a Hindu party by perpetuating internal oppression.”

This should be the BJP’s broad positioning and will ensure its growth over the long term. The BJP cannot escape perceptions that it is a Hindu party. No Hindu will refuse to vote for the BJP because it is accused of being Hindu just as no Dalit will see Mayawati’s Dalit origins as a reason not to vote for her.

There will be another bonus for the BJP owning up to its Hindu positioning: when it is in denial, it is the fringe that gets to be the voice of the Hindu. Does the BJP want the Sakshi Maharajs and assorted Sadhvis, who tend to alienate mainstream Hindus, to become the de facto voice of the majority community? The fringe will become the core if the BJP abandons its raison d’etre.

The short point: the BJP has nothing to gain by running away from its core Hindu positioning.