The Build-Up To A Riveting Political Contest In Tamil Nadu 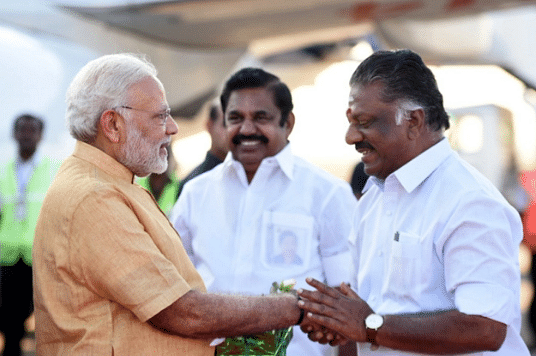 “Think wisely before you exercise an action. Having done so, however, never look back and regret. That would be a shame,” said Tamil philosopher Thiruvalluvar in his celebrated work Thirukkural, a collection of couplets on politics and ethics. After months of speculation, every political party in Tamil Nadu has finally played its political cards with respect to the 2019 Lok Sabha elections.

But the 2019 election is very different in Tamil Nadu. The AIADMK leader Dr J Jayalalithaa and the DMK leader M Karunanidhi passed away in recent years. For the first time in three decades, the state will see a Lok Sabha election without the two towering personalities at the helm of their respective parties.

Both Jayalalithaa and Karunanidhi personally came from non-dominant castes. While the state politics has heavy undercurrents of caste-based messaging and organisation, both Jayalalithaa and Karunanidhi had personal charm and appeal which overshadowed caste considerations routinely. Barring the 1999 and 2009 Lok Sabha elections, the larger personality driven macro sentiment has always overruled local candidates and sub-regional issues, resulting in a complete sweep for one alliance grouping.

However, the set-up in 2019 is very different. There is space now for the next generation of leaders who have emerged in the state. Many of them do not have a strong state wide appeal yet are strongly identified with their castes or regions. Edappadi Palaniswami (EPS), the current Chief Minister, O Panneerselvam (OPS), the current Deputy Chief Minister, T T V Dhinakaran (TTV), and Anbumani Ramadoss are some notable names. DMK leader M K Stalin has not been able to capitalise on the sympathy arising from Karunanidhi’s death. He has his own following, but he hasn’t gained more ground in the half year that he has been at the helm of the party.

The AIADMK government led by EPS and OPS was labelled ineffective, with several voter segments unhappy with the government. However, the duo has covered some ground in the last year. This government is now likely to survive the full legislative term till 2021 – an event which had very low probability until last year.

In this backdrop of political fragmentation where there are emerging leaders but no pan-Tamil Nadu icon, both the AIADMK and the DMK have announced their political alliances this week.

The DMK will continue to contest with the Congress, which does not have a big base of its own and continues to be a liability in its inability to generate votes for its alliance partner. The DMK is, however, giving nine seats to the Congress in the hope of emerging as a key ally should the Congress-led United Progressive Alliance (UPA) form the next government in Delhi. The UPA will also likely have the support of the MDMK, the Viduthalai Chiruthaigal Katchi (VCK), Communist Party of India, Communist Party of India Marxist (CPI-M), and the Kongu Nadu Makkal Desiya Katchi (KMDM). This DMK-led alliance is expected to dominate the Lok Sabha polls, though it may not be able to sweep the state as was expected last year.

The AIADMK on the other hand has stitched up a rainbow coalition. On one hand, the party announced an alliance with the Ramadoss-led PMK, offering them more seats than what the DMK was offering for a potential alliance. On the other hand, the AIADMK has also allied with the BJP, leaving a few seats for the national party. On its part, the BJP is trying to bring in Desiya Murpokku Dravida Kazhagam, a party led by film actor Vijayakanth. The Tamil Manila Congress (TMC) led by veteran leader G K Vasan is also in talks with the AIADMK to find a place in the National Democratic Alliance (NDA). The Indiya Jananayaka Katchi (IJK) is also expected to join this alliance. The AIADMK-led NDA seems to have recovered some ground, given the extent of the alliance.

The BJP and the AIADMK have been pragmatic about their calculations. The BJP negotiation team led by Union Minister Piyush Goyal and the AIADMK team led by EPS and OPS seem to have arrived at a consensus like Bihar and Maharashtra, where BJP took a broader national view rather than trying to assert itself against the allies. Of course, the leverage BJP had in Tamil Nadu was much lower than Bihar and Maharashtra.

What Is Working For The NDA?

The EPS administration was in total flux till a year back but seems to have stabilised in recent months. It’s raining cash and freebies in Tamil Nadu. In January, the state government distributed Rs 1,000 for 2.01 crore family card holders in the state, for celebrating the harvest festival of Pongal. With an eye on elections, the government is all set to roll out a special financial assistance scheme for people below poverty line with Rs 2,000 each to be transferred to almost 60 lakh accounts. The state budget expected to be presented on 24 February (the birth anniversary of Jayalalithaa) is when this scheme is expected to be announced. The state government is also working on a speedy implementation of Prime Minister Narendra Modi’s announcement of giving Rs 6,000 annually to farmers. This will also be kick-started on 24 February and the transfer of the first installment expected to be completed by 31 March.

2. Likely Dominance In The Kongu Belt

NDA’s road to success in the state begins from the Kongu belt of West Tamil Nadu. A traditional AIADMK stronghold, it buttressed the AIADMK tally even in the 2009 Lok Sabha elections when the DMK-Congress combine swept elsewhere. The Gounder community is present in large numbers in nine seats (Salem, Nammakal, Erode, Tiruppur, Nilgiris, Coimbatore, Pollachi, Dindigul and Karur) of this region and is expected to fully back Chief Minister EPS, the first ever CM from this community. BJP also has a support base in a couple of constituencies (Coimbatore and Pollachi) in this region and a total sweep by the NDA is quite likely.

Even though the PMK had contested the 2016 assembly elections on its own and failed to win a single seat, it was aggressively wooed by both the UPA and the NDA until the NDA succeeded. PMK’s utility comes from its support base in the numerically dominant Vanniyars, a community present in large numbers across 14-15 seats of northern Tamil Nadu. PMK has a strong captive vote share of 15-20 per cent across five-six of these parliamentary constituencies (Arakkonam, Arani, Dharmapuri, Krishnagiri, Chidambaram and Sriperumbudur) and has managed to retain it as part of different political groupings. Even in the 2014 Lok Sabha elections, PMK as a part of NDA, secured 21.5 per cent vote share in the eight seats it contested.

The BJP tends to have a higher vote share in national elections across all states and Tamil Nadu is no different. Even in 2014, BJP had a vote share of over 24 per cent across the nine seats it contested. In this backdrop, the seat-sharing arrangement and decision to contest only five seats reflects BJP’s pragmatism and a strong desire to limit the UPA tally. The BJP’s support base in certain pockets (South Chennai, Coimbatore, Pollachi, Kanniyakumari and Vellore) of the state should augur well for the overall NDA tally.

Tamil Nadu is the state where money spent per vote by political parties is likely the highest in the country. The NDA with incumbent governments at the Centre and the state have a significant leg-up over the UPA in this regard. The DMK has been out of power in the state and in the Centre for over seven years and somewhere the relative resource shortage could place it at a disadvantage.

What Is Not Working For The NDA?

T T V Dhinakaran is a man out for revenge and is expected to go all out to hurt the EPS-OPS duo. He showed his mettle by winning the R K Nagar by-election. While the TTV-led Amma Makkal Munnetra Kazhagam (AMMK) will have some adverse impact across the state, the most pronounced impact will be felt in the Thevar dominated seats of delta and south (Thanjavur, Sivaganga, Madurai, Theni, Virudhunagar, Ramanathapuram and Tiruchirapalli). The AMMK, TTV’s political party, might itself end up winning just a seat or two in this region but may help UPA by cutting the NDA vote here.

Minorities (Muslims and Christians) form 13 per cent of the state’s population. While the DMK has always attracted a lion’s share of this vote, the AIADMK also had decent influence among minorities. An alliance with the BJP means the AIADMK will likely lose that support handing the UPA a potential advantage. A case in point is the Kanniyakumari seat, which the BJP had won in 2014. In a fairly polarised election, a Christian AIADMK candidate had polled significant number of votes aiding the BJP victory. Such a buffer will be absent this time around. The DMK will mostly offer one seat to the Indian Union Muslim League (IUML) as a symbolic gesture for minority vote consolidation.

3. The Vanniyar Vs Adi Dravidar Equation

The Vanniyar and the Adi Dravidar communities have historically had a stormy relationship with each other resulting in significant social strife. While the instances of social discord have come down, the mutual animosity has remained. With the NDA betting on Vanniyars by allying with the PMK, a counter-consolidation of the Adi Dravidars for the UPA is likely.

The Nadar community is present in significant numbers in five southern Tamil Nadu constituencies (Virudhunagar, Thoothukkudi, Tenkasi, Tirunelveli and Kanyakumari). The entry of Kanimozhi (whose mother is a Nadar) in the Thoothukkudi race could queer the pitch for NDA in this region.

Until last year, the political bets in Tamil Nadu were totally on the DMK and its allies. The consensus was that the DMK-led alliance will sweep the state in a role reversal from the 2014 election. While the DMK-led alliance still seems better placed, the improved governance in the state and the final set-up of the two alliances has brought the NDA back in contention. As the two sides allocate seats to alliance partners and local caste dynamics come to the fore, the political situation will evolve. What can be safely said for now is that both alliances will have to jump through several hoops to please the voters and a riveting contest is on the cards.