The Bureaucrat Who Rules Odisha 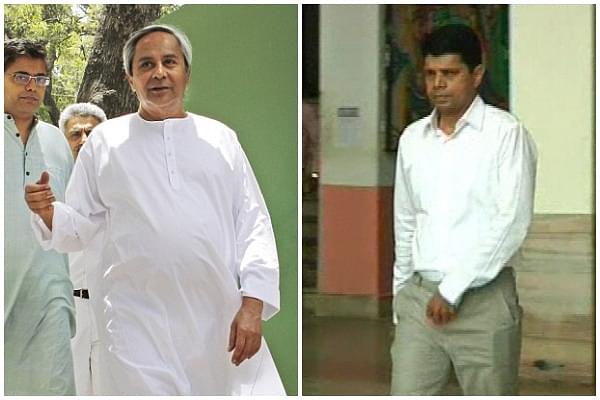 He is referred to as the ‘third floor’ and is held in awe and even feared by politicians, bureaucrats and commoners alike. He is said to be the most powerful man in Odisha, second only to Chief Minister Naveen Patnaik who trusts him completely and wields power, authority and control over not only the state administration, but also his own party- the Biju Janata Dal -through him.

Meet V Karthikeyan Pandian, a 2000 batch IAS officer, who has been Naveen Patnaik’s private secretary since 2011. His office on the third floor of the state secretariat (hence, the ‘third floor’ moniker) is where all business of the state is reportedly transacted from. He is said to be Patnaik’s closest confidante and even senior ministers reportedly line up outside his chamber to meet him while top bureaucrats are learnt to take instructions from him. No important file is said to move without Pandian’s express approval.

Pandian - even his harshest critics credit him with efficiency came to Patnaik’s notice when he was the district collector of Ganjam, the Chief Minister’s home district. Patnaik has been representing Hinjili constituency in Ganjam since 2000. Under Pandian, Ganjam - a poverty-stricken districtwhich was known for a very high rate of migration of unskilled men and women to other parts of the country to work as labourers - was adjudged the best-performing district in the National Rural Employment Guarantee Scheme (NREGS) in 2008. He joined the CM’s secretariat in 2011 and gradually won Patnaik’s total trust and confidence.

So powerful is Pandian that Patnaik does not mind sacrificing even his closest advisors and long-time friends who don’t see eye to eye with the mid-ranking bureaucrat. One prime example is Kendrapara Lok Sabha MP Baijayant 'Jay' Panda, who was suspended from the BJD earlier this year for crossing swords with Pandian. Panda told Swarajya: “I have been associated with the BJD since its founding in 1997 and for 15 years had been very proud of the independent and ethical course we charted. But in the last four years or so, a new coterie led by a serving bureaucrat has taken full control of the party and veered it sharply away from its core principles. After trying unsuccessfully to discuss and resolve these issues internally, I was forced to speak out publicly”.

Panda had led the charge against Pandian, accusing him of taking control of the party and the state administration and of various unethical practices. Others in the BJD have also attacked Pandian. This newspaper report highlights the resentment among BJD leaders over Pandian’s running the party while this article says that Panda’s suspension proves how powerful Pandian is. This news report also highlights Pandian’s power.

A BJD spokesperson laughs off such accounts of Pandian’s power and status. “In the early part of the last decade, people used to say (senior party leaders) Dilip Ray and Bijoy Mohapatra wielded lot of powers and were calling the shots. Then people started referring to Pyari Mohan Mohapatra as the ‘super CM’. There were also rumours of Kalpataru Das being very powerful. Now it is Pandian. But those who say all this are not thinking things through. Pandian is simply the contact point between the Chief Minister, who is also the party president, and others in the state administration and the party,” the spokesperson said.

A senior BJD leader who fell out with Naveen Patnaik over Pandian’s supreme role in the party- this leader calls Pandian the ‘working president’ of the BJD - says that Patnaik has always been dependent on person(s) to run the party and the government. “Naveen Patnaik is not a hands-on person and doesn’t like to get involved in the day-to-day affairs of the party and the government. He likes to keep himself away and above all that. Staying aloof also helps him preserve his image. So, he has always relied on a few people through which he executes his will. They take the blame if anything goes wrong while he gets to take all credit for things going right,” said the BJD leader.

Pandian is not the first person to become powerful in Odisha. Before him there was Pyari Mohan Mohapatra, a bureaucrat-turned-politician who was as powerful as Pandian is now. “At that time, the power centre was 3 Shahid Nagar (Mohapatra’s residence in the heart of Bhubaneshwar). He got very close to Naveen Patnaik while he was a serving IAS officer and it was through him that the chief minister executed his writ. After retirement, he formally joined the BJD and became a Rajya Sabha MP. He helped Patnaik win successive polls and was a master strategist. Patnaik became totally dependent on him. Slowly, the power centre shifted from ‘Naveen Niwas’ (Naveen Patnaik’s residence) and (the BJD office at) Forest Park to Mohapatra’s residence,” said the suspended BJD leader who did not want to be named.

However, differences slowly emerged between Patnaik and Mohapatra. “Naveen Patnaik is basically a very suspicious person and the suspicion stems from his insecurity. When he started seeing cutouts of Mohapatra at public meetings had become larger than even his own cutouts, when he saw senior BJD leaders and bureaucrats and hundreds of supplicants lining up outside Mohapatra’s residence every day, he got alarmed and tried to cut Mohapatra’s wings. Mohapatra, having delivered successive victories for the BJD, also started believing that he could emerge the undisputed leader of the BJD,” said the BJD leader.

In May 2012, when Naveen Patnaik was out of the country, rumours started flowing thick and fast that the BJD was splitting. MLAs and party leaders started streaming to Mohapatra’s residence. A signature campaign backing Mohapatra started and resorts outside Bhubaneshwar were booked as safe-houses to put up dissident MLAs. “Some of us senior party members who were close to Naveen Patnaik got together at Naveen Niwas and launched a concerted effort to defeat the rebellion (read this article). We succeeded and by the time Naveen Patnaik returned to Bhubaneshwar after three days to a huge welcome, the coup attempt had been defeated,” said this BJD leader.

But following this botched coup attempt, Naveen became increasingly suspicious of his party colleagues. “His health suffered. He changed drastically after Mohapatra’s coup attempt. With Mohapatra cast away, a vacuum emerged and Pandian, who was already serving in the CM’s secretariat, stepped in to fill the vacuum. By 2014, Pandian had taken total control of the party and the state administration. He became the man in charge of collecting funds for the party and started handing out party tickets to mostly young in the elections. He thus has a large number of young loyalists within the party. The reason Naveen Patnaik trusts him is not only his efficiency, but also because of the fact that Pandian is not an Odiya and can never mount a political challenge to Naveen Patnaik,” said the suspended BJD leader.

BJP state executive member Biswajit Mohanty says that Pandian became powerful just before the panchayat polls in the state in end-2013. “The BJD’s coffers were empty and there was a crisis since (Pyari Mohan) Mohapatra, who was the primary fund collector for the party, was not there (he had been removed after the failed coup). Pandian came to the party’s rescue and raised funds. Naveen Patnaik became eternally grateful to him. Pandian then became very powerful. Today, a majority of the party MLAs and many ministers are his loyalists and appointees since he had given them tickets and berths,” Mohanty, whose father Ranjit Mohanty, a renowned barrister, was a close friend of Naveen Patnaik’s legendary father and two-time chief minister Biju Patnaik, told Swarajya.

Dilip Satpathy, the resident editor of Business Standard in Bhubaneshwar, says that since Naveen Patnaik “has a language barrier (he doesn’t know much of Odiya) and can’t mingle with the masses” and also “doesn’t understand the complexities of administration and politics”, he has always been dependent on someone or a small group of people close to him for advice and to get things done. Before Pandian, he says, another bureaucrat - Bijay Patnaik -used to run the chief minister’s secretariat efficiently but never wielded disproportionate power. “Patnaik moved out to become the chief secretary and his successor, Aditya Padi, was a typical bureaucrat who was not very dynamic. Pandian (who was already in the CM’s secretariat then) got his chance. He (Pandian) was sharp, dynamic and politically astute and started taking on responsibilities by handling court cases and managing political issues. He thus gained the total confidence of the Chief Minister,” said Satpathy.

Senior state BJP leader Kanak Vardhan Singh Deo, who was a senior minister in Naveen Patnaik’s cabinet when the BJP was in alliance with the BJD, says Pandian has emerged as the undisputed power centre in the state. But what is of concern, he states, is that Pandian has politicised the state bureaucracy. “Bureaucrats in the districts act like district heads of the BJD. They are completely involved in running the affairs of the party (the BJD) and Pandian gets all the political inputs from them. The posts of district party presidents have become irrelevant,” he said. This view is endorsed by the suspended BJD leader and also Shanti Bhushan, a senior journalist with OTV (Odisha’s leading news channel). “Pandian has loyalists among state cadre officers who report directly to him and give him all the political inputs from the districts,” said Bhushan.

The 44-year-old Pandian, a post-graduate in plant physiology, controls all access to Naveen Patnaik and even senior ministers cannot meet the chief minister without Pandian’s approval. And, says the suspended BJD leader, “it is pointless taking problems and issues to Naveen Patnaik because he simply refers them to Pandian, who always sits in at all meetings people have with Naveen Patnaik”. Pandian reportedly goes to Naveen Niwas at around 7 am everyday and then travels to his officeon the third floor of the state secretariat. “Pandian has a fixed time - 10.30 am to 11.15 am - to meet senior party leaders and ministers and then briefs the Chief Minister who reaches the state secretariat around 11.30 am. After the CM leaves around 1.15 pm, he again meets bureaucrats. After that, he goes to Naveen Niwas again and is there till late evening. His capacity to put in long hours and dispose of files is phenomenal,” said a six-time BJD MLA and former Minister who did not want to be named.

Pandian, unlike Pyari Mohan Mohapatra, poses no threat to Naveen Patnaik. Also, Pandian, who hails from Tamil Nadu, is very discreet and keeps away from the public eye. He never speaks to the media and is a behind-the-scenes man. And he is said to be extremely efficient. Pandian has built a close-knit team of bureaucrats, including some IPS officers who are in the CM’s secretariat, who run Odisha for all practical purposes. But senior bureaucrats are not happy with this state of affairs. Nor are senior leaders of the party who feel sidelined and whose access to Naveen Patnaik has been cut off. This resentment could, sometime in future, blow up on Naveen Patnaik’s face.