The Exodus From Trinamool Has Just Begun, Likely To Turn Into A Torrent 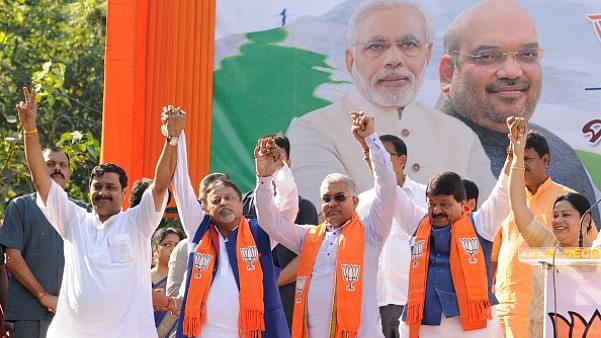 As was widely speculated, the exodus from the Trinamool to the Bharatiya Janata Party (BJP) has just started. Senior BJP leader Mukul Roy’s son Subhrangshu (an MLA) along with two more legislators - one from the Trinamool and the other from the CPI(M) - as well as more than 60 Trinamool corporators from three municipalities joined the BJP on Tuesday. This is just the beginning and, say senior BJP leaders, the trickle will turn into a torrent soon.

Prime Minister Narendra Modi had, during the course of the election campaign, claimed that 40 Trinamool MLAs were in touch with the BJP and were eager to switch sides. “When the lotus will bloom all over Bengal after May 23, Didi (Banerjee), you will see that your MLAs will also abandon you and run away. 40 of your MLAs are in touch with me even today,” Modi had said at an election rally in mid-April. The Trinamool had scoffed at the claim, retorting that not even a single Trinamool councillor would join the BJP.

Senior BJP leaders say that more than 40 Trinamool MLAs, and a few newly elected and former MPs as well, are indeed in touch with the saffron party and will switch sides at an opportune moment.

“A huge number of councillors of Trinamool-run municipalities, and members of gram panchayats, panchayat samitis and zilla parishads, are in direct touch with us. We want them to join the BJP collectively in huge numbers so that the entire boards of these civic and rural bodies turn from Trinamool to BJP. At the same time, we are also conducting due diligence on those wishing to join us and ensuring that only those who are compatible with our ideology and ideals get our party membership,” said a senior BJP leader.

A Trinamool minister, who had been close to Mamata Banerjee, confirmed that many of his party colleagues were in touch with the BJP and had helped the party in the just-concluded elections.

“We have initiated damage-control measures to stem the defection of our members. We are keeping a close watch on everyone and are identifying those who are likely to defect to the BJP. We cannot do much against people who are opportunists by nature, but we are divesting them of all party responsibilities,” said the minister on condition of anonymity.

It’s Not Just Opportunism, As Claimed

However, it is not mere opportunism that is driving many in the Trinamool to join the BJP. There are many other factors at play here, and one of the biggest is Trinamool chief Mamata Banerjee’s temperament.

“No self-respecting person can survive in this (Trinamool) party. Mamata Banerjee treats everyone like dirt. She is quick-tempered and indiscreet, and is often abusive with even senior cabinet ministers. She insults senior leaders in front of party workers, and is suspicious by nature. She easily lends her ears to unfounded allegations and gossip about her party colleagues and takes action on the basis of such allegations. No one can ever be at ease with her,” said a Trinamool legislator from North Bengal.

Another MLA from that region recounted a meeting of the Uttar Banga Unnayan Parishad (North Bengal Development Board) last year convened by Mamata Banerjee. “Some of us drew her attention to the slow pace of some development works and before we could finish, she got up from her chair and started rebuking us. She started accusing us of indulging in false propaganda to discredit her government. When one of us tried to argue, she became abusive and threatened to expel him from the party. All this happened in front of many mid-ranking and senior officers. That is why officers do not respect us or listen to us,” said the MLA.

Many also complain of Mamata Banerjee’s “autocratic nature” and lack of inner-party democracy in the Trinamool. “What she says is the law. And often, what she says is completely wrong. She acts mostly on her whims and fancies and does not listen to sane advice. She does not trust most people and plays favourites. Many have left or distanced themselves from the party because of her. I have been associated with the Trinamool ever since it was formed and when I was a university student. To be sidelined by self-seeking opportunistic leaders who are now close to her is deeply distressing and demoralising,” said a former Trinamool MLA.

Another major reason for disgruntlement within the ranks of the Trinamool is the presence of Islamists who have grown very powerful in the party. Controversial people like Siddiqullah Chowdhury, president of the Jamaat-e-Islami’s Bengal chapter, who Mamata Banerjee made a minister, co-founder of the banned Students Islamic Movement Of India Ahmed Hassan Imran, and Islamic hardliner Idris Ali have become very powerful within the Trinamool.

“They have Mamata’s ears and she depends a lot on them because she believes they can deliver the Muslim votes to her. They have convinced her that she can stay in power in Bengal as long as Muslims are with her. They have led her down the dangerous minority-appeasement path,” said a junior state minister.

Siddiqullah Chowdhury has often been accused of exerting undue influence over Mamata Banerjee and prevailing on her to frame policies and programmes that have been termed as minority-appeasing and have harmed the Trinamool’s prospects in the just-concluded Lok Sabha polls.

Chowdhury, incidentally, had strongly opposed the Supreme Court judgement on triple talaq. Ahmed Hasan Imran is being probed by the National Investigation Agency (NIA) and Central Bureau of Investigation (CBI) for his suspected links with the hardline Jamaat-e-Islami Bangladesh (JmB) that has been accused of terror attacks in that country. Idris Ali, who was a Trinamool Lok Sabha MP, is another hardline Islamist who wants Sharia to be implemented in Muslim-majority areas in Bengal. He has been accused of inciting riots in Kolkata in 2007 in protest against the presence of Bangladeshi author Tasleema Nasreen in the city.

Many within the Trinamool’s rank and file are also extremely unhappy over the primacy given to Firhad Hakim, the state’s Urban Development Minister who Mamata Banerjee named as Mayor of Kolkata a few months ago. Mamata Banerjee’s appointment of Hakim as head of the Tarakeshwar Development Board (Tarakeshwar houses the Taraknath Mandir and is a major pilgrimage for Hindus) last year sparked a controversy and protests.

“Our party chief is being controlled now by a coterie of Islamists who are pushing her towards appeasing Muslims and, in turn, this is angering Hindus. We are in a very uncomfortable position because we have to face the people. But we cannot take our concerns to Mamata Banerjee. Hakim and other Muslims around her (Mamata Banerjee) are controlling her now,” said the junior minister.

Hakim courted serious controversy when he referred to a Muslim-dominated pocket in Kolkata as ‘mini-Pakistan’ to a visiting Pakistani scribe in 2016.

This primacy given to Islamists and the determined pursuance of minority-appeasement policies by Mamata Banerjee is also a driving force behind the expected exodus from the Trinamool. Many senior cabinet ministers are uneasy over this, but cannot voice their concerns to Mamata Banerjee.

So, there is acute resentment within the Trinamool over Mamata Banerjee’s style of functioning, her abusive nature and her quick temper, her minority-appeasement policies and the primacy she gives to Hakim and other Muslim leaders who are hardline Islamists.

This resentment has been brewing for the past few years and the BJP’s rising political graph has only provided an opportunity to the long-suffering Trinamool functionaries to let out steam by switching sides.

Mamata Banerjee has only herself to blame for the desertions she has started suffering.