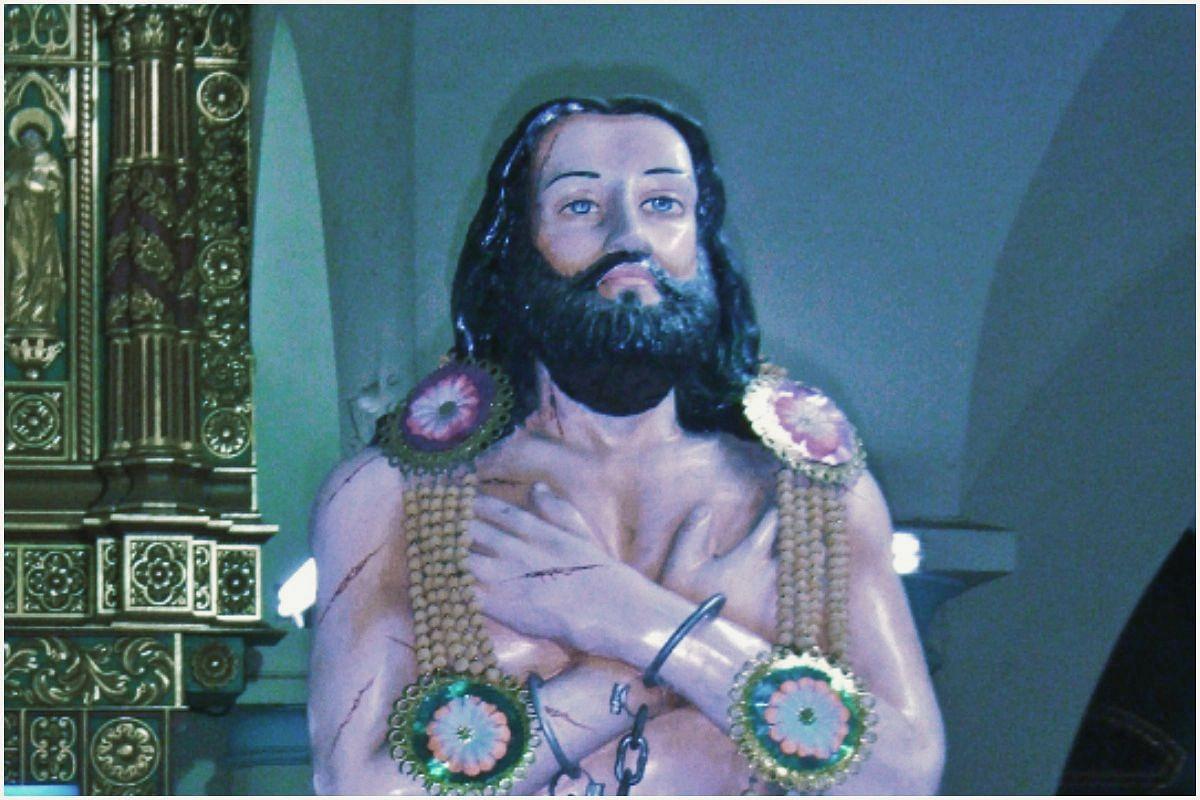 Even as Prime Minister Narendra Modi met the Pope and invited him to India, the Catholic Church announced on 9 November 2021 that Pope Francis shall formally canonize one Devasahayam Pillai on 15 May 2022. Most of the mainstream media joyously reported that he was the first Indian lay Catholic to make it to the list of Catholic saints.

Who was Devasahayam Pillai?

According to Catholic martyr cult accounts, Pillai was born in a Nair family as Neelakandan in Travancore, in the late 18th century. He embraced Catholic religion and was baptised. As a consequence of this, he was martyred by the then Travancore kingdom ruled by Marthanda Varma.

Neelakandan alias Devasahayam alias Lazarus, was said to have been converted to the Catholic religion by Eustachius De Lennoy - a mercenary naval officer caught by Travancore forces. Marthanda Varma had a liking for De Lennoy and had made him in charge of modernising the Travancore Army.

It is said as Neelakandan was having financial difficulties the captured mercenary introduced the Bible to him. The Catholic Mass Book claims that ‘Neelakandan was baptized in 1745 at Vadakkankulam in a Jesuit church under Rev.Fr. R. Bouttari Iyalus S.J.’. Four years after his baptism, he was said to have been arrested and then after 'three years of torture', as he refused to abandon Christianity, he was said to have been executed.

Catholic propaganda literature including plays, modeled after traditional Hindu village plays, show him as 'giving up the right of his noble birth by identifying himself with the outcastes and the marginalized.'

A recent Vatican release has this to say:

While preaching, he particularly insisted on the equality of all people, despite caste differences. This aroused the hatred of the higher classes, and he was arrested in 1749. After enduring increasing hardships, he received the crown of martyrdom when he was shot on 14 January 1752.

So, the ‘upper caste’ Hindus in general and the Brahmin head minister-adviser of Travancore State, Rama Iyen Dalawai, in particular have been made the villains of this martyrdom story.

Let us look into the factual possibilities of these claims one by one:

Generally, the Travancore kings often allowed proselytising activities and in a typical show of misplaced-tolerance, even condemned Hindu resistance to conversions. Thus, as early as 1526 CE, having obtained Portuguese help through St. Francis Xavier against the Vijayanagara kingdom, the Travancore king, Bhutala Vira Udaya Marthanda Varma (not to be confused with later century Marthanda Varma) warned Hindus of coastal provinces not to hinder the conversion activities.

He made an edict warning 'the senior and junior Kangan (the head-man and his assistant among the Hindu fishermen) who resided in the haven at Kumari-muttam, commanding them that they should not 'harass' the Christian converts who 'were exempted from paying the taxes due to the village community of the heathens, such as -idankai, valankai-panum (the tax for the right and the left hand castes) padaippanam and prachanda-kannikai.' (V.Nagam Aiya, The Travancore State Manual, Vol-I, 1906, p.296)

There is no evidence whatever to suggest that the attitude of the Travancore leaders changed in favour of Hindu resistance to conversion - even down the next two centuries.

Marthanda Varma (1706-1758) who ruled from1729 till 1758 was both a ruthless king and a person open to modernity of the times. He mercilessly eliminated his opponents and auctioned their women and children. He made enemies of quite a significant number of Hindu communities in his quest for power. At the same time, he declared himself to be 'Padmanabha Dasan'.

After his 'victory' over the Dutch, the captured mercenary Flemish captain Eustace Benoit de Lannoy (1715–1777) was employed by the king to transform Travancore army into a form similar to a European military. According to Catholic propaganda, it was Lannoy who had counselled Pillai 'on the uncertainty of earthly riches and advised him to put his trust in God.' (Fernando & Gispert-Sauch,'Christianity in India:Two Thousand Years of Faith', Viking, 2004,p.94).

That a mercenary who worked for Dutch navy and later worked luxuriously with Travancore army should be teaching a Hindu about the impermanence of earthly riches is quite a stretch, even by Catholic standards.

Both Marthanda Varma and his chief minister Rama Iyen Dalawai, the major strategist, often relied on converted Christians as well as Muslims when they feared the loyalty of their Hindu soldiers. For example, here is an incident that happened in the period 1749-50, the time when Pillai was said to have been jailed and tortured for his Catholic faith:

... a number of Telugu or Gentoo Brahmans, dependents of the (fleeing) Rajah, flocked together and placed themselves before Rama Iyen's army in the belief that in Travancore the life of a Brahman was sacred and consequently they would not be in danger of being killed. But Rama Iyen, though himself a Brahman, determined to do his duty and in the first instance told the Brahmans that they had no business with the politics of the country and that they had better look to the performance of their religious ceremonies, instead of unnecessarily endangering the safety of their lives. But heedless of the Dalawai's advice and remonstrances the Brahmans began to shout and throw sand and stones at the army an to curse both it and the sovereign of Travancore. On this Rama Iyen requested Captain D'Lanoy to do his duty without shrinking. This brave officer, calling a few companies of his detachment, consisting of Christians, Mauplays and fishermen, directed them to drive away the mob of Brahmans and clear the way for the march.

P.Shungoonny Menon, A History of Travancore from the Earliest Times, Vol-1,Higginbothams, 1878, pp.153-4)

How is it possible that Rama Iyen who did not hesitate to employ converted Christians and Muslims to brutally attack the crowd of Brahmins with the help of De Lannoy, should allow torture and subsequent execution of a person who had allegedly converted to Catholic religion supposedly under the influence of the very same De Lannoy?

The egalitarian attitude of Pillai and hence his punishment too is a myth that has been fabricated to appeal to the sensibilities of modern values and to also brandish the anti-Brahmin card.

Pillai is said to have been baptised in a Jesuit church by a Jesuit priest. Of all the missionaries in India, Jesuits were the most sympathetic to caste divisions. They had constructed walls within the Church separating the so-called upper castes from lower castes. Also, if there were so-called 'untouchable' converts, they had to stand outside.

It should be remembered that while the Church did not attach much importance to India’s indigenous social hierarchies, nevertheless, for them social hierarchies and birth-based hierarchies were important in their own society. Jesuits happily accepted the social discrimination and exclusion that existed in India. Here is a classic statement endorsing caste-based pollution in the context of evangelism by Constantine Beschi, another Jesuit priest who was working in southern India with great zeal:

Is it possible for a washerwoman, a Panchama woman, picking over oysters in the paddy field, to explain the Chintamani or discuss the Tholkappiyam? Is it not proper that the Scriptures, like a tank of drinking water, should be guarded from the pollution of the unclean and the casteless, who shall instead, be served with a potfull by the guardian brahmin?

Beschi had died two years after the alleged baptism of Pillai. Given such a nature of Catholic Christianity, particularly as served by the Jesuits, how could Pillai, who was baptised in a Jesuit Church, have gone against the caste restrictions, and that too because of his Christian faith?

A Historian's Judgement of the fabrication

One of the veteran historians of Kerala, Nagam Aiya, who authored the multi-volume Travancore State Manual, had given particular attention to this myth of the martyr and had recorded some interesting observations:

It is one evidently started by the later converts. From a habit of apotheosizing their ancestors or heroes so common among our people. For the Belgian officer Eustace de Lannoy was the Commander-in-Chief of the Rajah’s forces and had great influence with him and would not have allowed a convert who took instruction from himself to have been imprisoned or shot. Lannoy’s influence with the Rajah was so great that he made him wage war against the Anjengo Chief to obtain his daughter in marriage for himself. Probably as a Palace official, Nilakanda Pillai was detected tampering with political secrets, on the strength of which action must have been taken against him years after he was converted to Christianity. Baptism could not have had anything to do with it especially in a State like Travancore ruled by Rajahs whose ancestor Cheraman Perumal in the fourth century had given away land and privileges to Thomas Cananeo and had inscribed them in copper-plate documents ...

Therefore, not only is the claim untenable in the historical sense, it is also offensive to Hindus – particularly the Hindus of Travancore. They have been only hospitable and concessional towards the evangelicals, including the Catholic and Protestant missionaries; yet, they have to bear the charge of religious persecution and execution.

The Catholic Church is known to fabricate such martyr stories and grand them sainthood, particularly when it has to create a monster out of the ‘other’ they want to proselytize. In this case—Hindus.

Hindus would do well look into the stories of such fabricated martyrs and saints which the Church used to propagate hatred against Jews and the Jewish religion.

They used the false story of Simon, a child who was said to have been martyred by Jews in a bloody ritual. It was only in 1965 – after the Holocaust- that the Pope removed Simon from Catholic martyrology.

Even more disturbing should be the case of the disappearance of a Catholic missionary Fr. Tommaso in Damascus Syria (which was then under Egypt). The Catholic network used various diplomatic consuls including the French – to pressurise the Egyptian government to blame the Jews of Damascus for a 'ritual murder' and got 12 prominent Jews arrested and tortured. Four of them died. The Catholic priest – who seemed to have left the city after threat of vendetta by a Muslim with whom he had entered into a confrontation- was declared a martyr.

It is through a sustained campaign across the world that Jews were able to prove their innocence and the hate-cult dimension of martyr-hoaxes. Today, the Church would not dare do such a thing against the Jews.

In India though, the Church has been creating fake archeological and historical claims throughout the Kanyakumari district for the Devasahayam Pillai hoax.

Hindus of the district have been hapless witnesses and victims of this hoax. So, who is there to speak for Hindus when they get vilified by an internationally powerful and proselytizing Church?

The onus is definitely and doubly upon Narendra Modi—who had invited Pope to India—and his government to stand firm and tell the Church not to play its hoax games on Hindus. Modi has done right in inviting Pope to India and now he should use the opportunity to tell him to make the Church realize that such hate-hoaxes will not be tolerated.