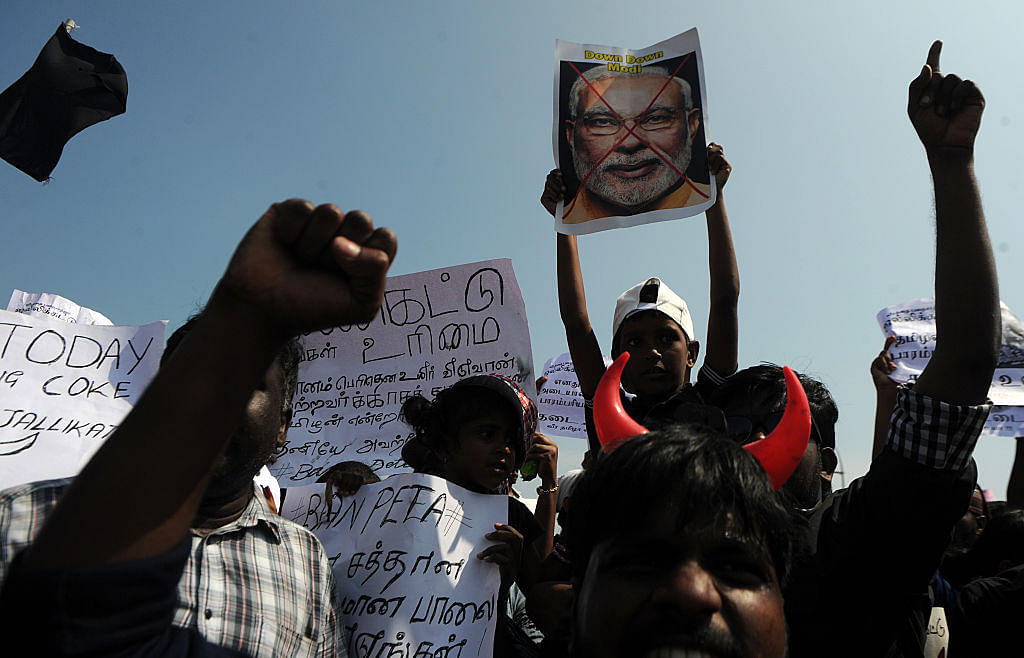 Students shout slogans and hold placards during a demonstration against the ban on Jallikattu. (ARUN SANKAR/AFP/Getty Images)

“Modi! Modi!” a five-year-old boy chants what has been fed to him. "A fraud with a beard," the crowd chants back. "Hindia against Tamil Nadu", another screams. Then, a two-wheeler passes by with a person on it wearing the prime minister’s mask garlanded with footwear. Before the two-wheeler are mug shots of Palani Baba, a Jihadist of Tamil Nadu, and Osama bin Laden.

And then there are proud protesters who hold placards which heap obscene, vulgar remarks on both the Chief Minister of Tamil Nadu and the Prime Minister of India. In Kanyakumari district, S P Udayakumar, who led the Luddite Kudankulam protests and who is known for his Tami secessionist leanings, is seen active among the protesters.

Meanwhile, Tamil media is portraying the pro-Jallikattu movement as a civil, spontaneous, democratic movement. However, a look inside shows that the incitement has been systematically fed into the Tamil psyche, pushing it towards irrational mob hysteria. The baseless rumour that the Modi government had Pongal removed from the list of 'compulsory holidays' was flashed as news across Tamil TV channels in such a manner that social media and the opposition erupted with unabashed anti-Modi venom.

On that day, this writer was attending an exhibition in Chennai. Every other Islamist and leftist stall I could see there exhibited anti-Modi literature, blaming the leader for everything from the failure of the rains to Donald Trump's victory. When the rumour was telecast as news, I saw visible euphoria among Tamil secessionists, for they had found a golden opportunity to bash the prime minister and, more important, seed in the minds of Tamils an anger against the Modi government.

Then came the Jallikattu outburst. Again, I have been a supporter of the game as part of the agro-eco system of some of the important districts of Tamil Nadu and also as a pan-Indian cultural phenomenon. If anything, it was the Union government which made a move against the ban on Jallikattu with an ordinance put a stay on the order. And the government did that long before the secessionists found in Jallikattu an opportunity to incite secessionist hysteria. Some Dravidianist movements even blamed Prime Minister Modi for allowing Jallikattu, which they said was a 'Hindutva agenda'.

In the present context, what is more amusing is the way Islamists have come forward to use the movement to whip up anti-Modi and anti-India, secessionist frenzy. While animal activists like Radha Rajan and Maneka Gandhi, with her cultural illiteracy of South Indian traditions, are playing the useful idiots for the anti-Modi forces, Islamists have been playing their cards with cold calculation. It is the old Obeidylluah plan of balkanising India along linguistic lines and Talibanising Tamil Nadu into an Islamist Caliphate.

In fact, this writer has been observing that the section ranging from so-called moderate Muslims to radical Islamists, has been advocating a separate Tamil/Dravidian identity while calling both the Hindu and Indian identity an artificial construct. Ameer, a film director who worked as an informer for Tamil Nadu Thowheed Jamath (TNTJ), enforcing censorship on media discussions on the Islamist veil, has now reinvented himself as a saviour of Tamil culture. His theological companion, TNTJ supremo, has consistently denounced Jallikattu as 'barbaric' and 'un-Islamic'. Yet, Islamist elements do not hesitate to take the opportunity to denigrate the prime minister and fan secessionist frenzy.

What’s interesting is that recent anarchist mass movements have also ushered despicable phenomena in the end. The French Revolution eventually led to a reign of terror, guillotine and, ultimately, the expansionist despot Napoleon. The 1917 revolution appropriated by Bolsheviks, ultimately led to Stalin, and the long march of Mao ended in the death of millions in famine. The Liberation Tigers of Tamil Eelam decimated all democratic Tamil voices, paving the way for one of the worst genocides in recent history.

In a caricatured repeat of history, the anarchist movement of Anna Hazare led to Arvind Kejriwal. Unlike Mahatma Gandhi, who led a people's movement with clear political objectives and through a party accountable to democratic controls, anarchist movements lead to mass hysteria without responsibility. So, eventually, they lead people to destruction in the name of utopia.

In the case of Tamil Nadu, the Islamist and secessionist forces are trying to turn the current anarchist movement into something even more sinister. After all, Hazare's anarchists never carried obscene placards against individuals and the head of the government.