The Right To Dissent Versus The ‘Absolute Right’ 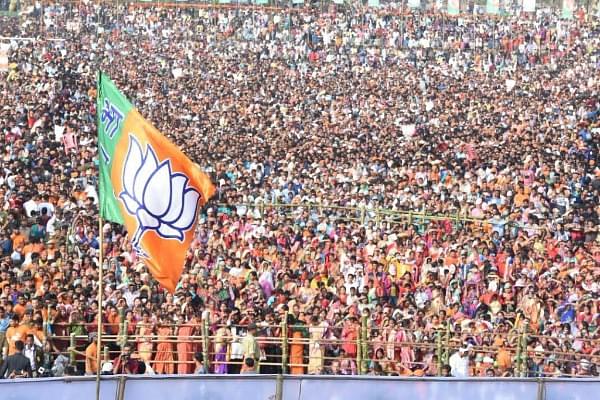 Apart from derision towards one of India’s most successful leaders and the thinly veiled condescension towards your fellow journeymen, what struck me about this op-ed covering the minority scholarship debate is its tone of moral absolutism. The author is absolutely certain that anyone not joining his outrage over the Modi government’s announcements of minority scholarships can be neatly pigeonholed in one of the five different stages of denial. The article absolutely refuses to entertain even the notion that there might be a sixth group of BJP supporters, who don’t fit into any of the five categories, and yet do not agree with the author’s view.

This rhetoric, by no means rare these days, has increasingly started to resemble the noise coming from the left. Some of us, consciously or otherwise, have taken to imitating the tactics of those we claim to fight. It is a stark reminder of Nietzsche’s quote about “When you look into the abyss, the abyss looks into you”. I am afraid some of us have been looking into the abyss a little too long.

Here then, is a short list of ways in which the cultural, reactionary right has started to resemble the reactionary left.

I once asked in a chat group what if being a Hindu, I thought private control of temples was a bad idea? The response (from a highly educated, non-resident Indian) was that I join the communist party! How often does this happen on social media? How often have you been called Andh-Bhakts and got “RSS is a bunch of duffers” quote thrown in your face for daring to question someone’s contempt for the country’s biggest, most resilient social service organisation? Many liberal, non-left women have borne the brunt of similar invective, perhaps even more unfairly than the examples above. This is not us; we don’t automatically assume everyone who doesn’t agree with our worldview is either corrupt or a moron.

2. Majority opinion or consensus on an issue no longer deemed necessary:

How many people outside the social media echo chambers have sought for abolition of Right To Education Act? How many people in the real world think temple control is the ultimate battle for our civilisation? And consequently, if these issues are yet to resonate on the ground, is it too much to ask that they be debated vigorously in the public sphere before being presented as core Hindu issues? Ask this question and the answer you are most likely to get is that issues of such importance cannot be left to consensus. Common people (‘Them’) are often culturally and historically unaware, and hence cultural right (‘Us’) must take the mantle upon ourselves. Only problem with that is you do need the support of those ‘unaware’ people and they are very unlikely to cut you a blank cheque for it. In the absence of a groundswell of support (the kind VHP-BJP-RSS built for Ram Janma Bhoomi), any amount of elite alarmism in conclaves/lit-fests is unlikely to have any impact on the policy. And not to put too fine a point to it, but dismissing public support as unnecessary, and insisting your boutique issues are the real core ones, is the kind of thing we are used to listening from the left.

The article under discussion says “Real friends tell the ugly truth; those justifying minorityism are leading Modi up the garden path”. The naive assumption that a politician of Modi’s savvy can be “led up” the garden path by social media warriors aside, what worries me is how similar this sounds to the “Dissent is the true hallmark of patriotism” rhetoric spewed by the left almost non-stop since 2014. Just as dissent cannot be automatically conflated with disloyalty, even assent cannot be automatically conflated with sycophancy or attempt to mislead. Questioning people’s purity over assent is as bad as questioning their loyalty over dissent.

4. Disdain for aspirations of the masses:

Before 2014, the most common argument given by the reactionary left against Modi was that you were repugnant if you put development above the secular fabric of the country. Five years later, the biggest critics of development sadly are not from the left but from the cultural right. From proclaiming “Vikas Is Bakwas’ (development is useless) to relentlessly mocking LED bulbs and toilets, the cultural right hasn’t been coy about their displeasure over the government’s development agenda. We saw a brief pause to this as we entered 2019, but as soon as the election results were out, the disdain, kept under check possibly for electoral compulsions, is out in open. In his victory speech, Prime Minister Modi said that there were only two castes in India - those who are poor and want to get out of poverty, and those who want to help the poor out of their poverty. Which caste does the ‘vikas is bakwas’ group belong to? And how is that caste different from the caste which appealed to us to put the nation’s secular fabric above our basic needs in 2014?

5. Taking out frustration on your own follower base:

In the aftermath of the election results last month, Yogendra Yadav said he felt like grabbing the voters by the collar and saying “you idiots”. Any political strategist worth her salt will tell you that no matter how crushing the end result, you never ever blame your prospective voter/follower base. Do we see the cultural right referring to those who don’t agree with them as dhimmis/andh-bhakts and a few other stronger words? How is this behaviour different from that of the Yogendra Yadavs? More importantly, how likely is it to convince people like me to change our mind?

And therein lies the fundamental reason why I am writing this article. The last thing I wish is to be guilty of the same sins I am calling them out on. Just because I don’t agree with them, I am not dismissing their arguments/demands as necessarily vile or unreasonable. It is just that their arguments are not convincing for the moment and a change in this situation will only follow a change in messaging. “Agree with us, you stupid bigots!” is a morally deficient position. It is also extremely poor messaging.