The Rise Of Fascism From India's TV Studios 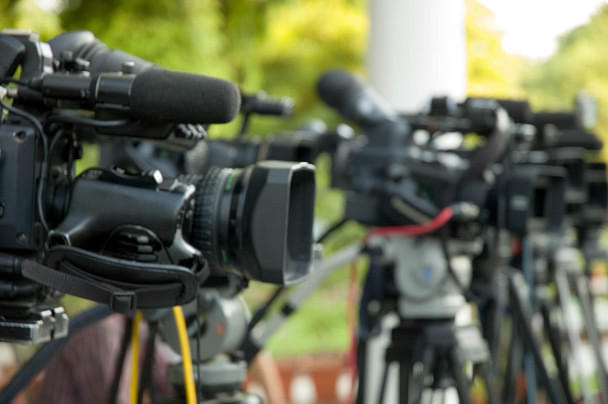 In any society fascism emerges from the educated class of people, never from the masses.

In an article in the Hindi newspaper Dainik Jagran of October 15, this writer argued:

‘India is witnessing the emergence of fascism from newsrooms, a movement of totalitarian ideas that divides us in order to win.’

In the Gramscian sense, journalists, activists and Twitterati are intellectuals. The term ‘Fascism’ was unique to Italy, but as a movement of totalitarian ideas it is relevant to explaining the Indian condition.

One, in any society fascism emerges from the educated class of people, never from the masses. All journalists and intellectuals howling at the government of Prime Minister Narendra Modi are highly educated.

Fascism of the educated class fears new ideas. F. A. Hayek, author of The Road to Serfdom, wrote:

‘It is perhaps the most characteristic feature of the intellectual that he judges new ideas not by their specific merits but by the readiness with which they fit into his general conceptions….’

Two, fascism’s conveyors are alive to the workings of media, the key concern of George Orwell in 1984. Media is fascism’s key ally. Baba Ramdev, the yoga guru, can claim that he tried to escape an ink attacker. But Sudheendra Kulkarni allows Shiv Sena to blacken his face, more thoroughly the better, waits for TV crews and proceeds to host former Pakistani foreign minister Khurshid Mahmud Kasuri in Mumbai. He will not release Nobel laureate Malala Yousafzai’s book in her birthplace, Swat. He knows where to host book events, and where not to host.

Three, the fascism emerging from India’s newsrooms is backed by big businesses and the nation’s dynasty. Corporates and dynastic centres of power pose a threat to democracies in every country. Indian media houses are ideologically configured. Fascism is conveyored by the paid mainstream media, which militates against the unpaid social media. Indian journalists describe every Twitter user who questions them with the power of facts and arguments as a Sanghi. In the West, such truth-tellers are dismissed as Zionists.

Four, in the pre-democracy era, fascism had a leader in Benito Mussolini, and marched with his regime and the army. In democracies, it is surviving as a movement of ideas, as the armies now serve the people and are accountable to civilian leaders elected by voters. As a movement of totalitarianism, fascism in India was silent as long as its leaders were in power. Even now, it shields the socialist leaders of Uttar Pradesh for the Dadri killing, or the communist leadership of Kerala despite 250 Rashtriya Swayamsevak Sangh workers being murdered. Its silence is murder.

Five, fascism is anti-democratic. It counters the leaders elected by masses if such leaders are not its allies. Since the elected leaders may not be educated, journalists target them to assist the march of fascism in Indian society. Journalist Nirupama Subramanian selected the rustic Haryana chief minister M. L. Khattar to seek his views on beef. She would never choose the more suave Arun Jaitley, or go to any village chowk to seek people’s views on beef because it will not serve fascism’s purpose, which is to undermine the elected government.

Six, fascism describes itself as working for people’s interests. For example, North Korea calls itself as the Democratic Republic; China describes itself as the People’s Republic; Cuba dubs itself a Republic. In fact, they are essentially totalitarian. Fascism does not work for people’s interests. Aided by journalists, it whips up passions in which public sentiment runs counter to public interest. Currently, India’s authoritarian and dynastic Congress party is being defended, note not by its own leaders, but by journalists and intellectuals. The Congress hopes to win by remaining silent.

Seven, journalists pose as moralists as teaching ethics to the government on varied issues such as the killing of Mohammad Akhlaq in Dadri or the murders of rationalists Narendra Dabholkar, Govind Pansare and M. M. Kalburgi. Such stance could be in public interest, but invariably these moralists are silent when Taslima Nasreen is attacked in Hyderabad, or Professor T. J. Joseph’s hand is chopped off and reformist Islamic scholar Chekannur Maulavi is killed by Islamists of Kerala. Fascism disregards the republic’s Rule of Law, loves the anarchism of Arvind Kejriwal.

Eight, the fascism emerging from television studios mushrooms into large-scale intolerance when the voters elect leaders not in ideological compliance with it. It fears vote. On the eve of elections, it searches for new issues that will serve its objective. Fascism hopes to win by dividing us. The lynch mob is at issue only when the victim is a Muslim. In Faridabad, journalists painted the deaths of two kids in fire as an attack on Dalits. ABP news channel described Chhota Rajan as a “Hindu don”. When a Naxalite is arrested, journalists describe Indian laws as ‘draconian‘.

Nine, since the fall of the USSR, fascism is allying with wickedness. Globally, the left-liberal journalists are in bed with jihadists. Indian journalists are silent on the rise of burqa in public life, or about the anti-women Shah Bano law because it came from their party. Fascism is anti-rights, anti-women and anti-democracy. One newspaper reported a non-existent military coup, the editor’s desire. In the Emergency, most journalists licked the boots and Khushwant Singh was lauded. Except ideology, what explains that Salman Rushdie will stand by his tormentors?

Ten, this fascism seeks allies in the enemy camp. It would not like to invite Malala Yousafzai to Mumbai because its allies in Pakistan would not like it. It is more comfortable with the Pakistani state’s representatives, whether Maulana Tahirul Qadri or those in the Track II underworld, or even the arch enemy General Pervez Musharraf. It does not serve Indian Muslims. It serves Islam – or burqa, triple Talaq and skullcap. Essentially, it shuns Muslim commentators who call for equality of Muslim women. It is not incidental that TV journalists love maulvis.

Eleven, the Berlin wall in Indian society fell in 2014 when the voters elected new leaders not liked by this class of fascists. Its debris is still clearing as journalists howl and awards are returned by those who benefitted from the party, the dynasty, the ideology. Karl Marx said that man makes history but he does so in some given circumstances. Modi emerged victorious because India’s voters noticed that the fascist class of journalists and intellectuals serves its own interests, not the nation’s half-clad daughter begging at the traffic lights for a few coins.

Twelve, Hayek argued that the intellectuals are ‘professional second-hand dealers in ideas‘. Now that Modi, the first-hand dealer in original ideas, has grasped the Hayekian view that economic freedom is a prerequisite for all other freedoms, Indian intellectuals are unwilling to tolerate the voters’ judgement. Aided by journalists, intellectuals are using television studios to accuse India of being intolerant. As the democracy matures, this class of intellectuals will die. The only path open for this landed fish is to search for a new moral universe.