These Are The People Paying The Price For Modi’s Victory 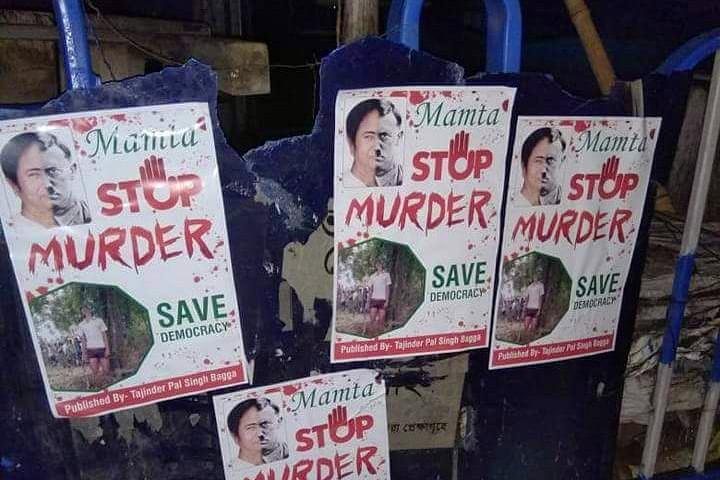 Narendra Modi came to power in May 2014, and by December of that year, the left-liberal cabal in New Delhi, cultivated by the Congress during its decades in power, had started crying wolf after realising that it had lost privileged access to the corridors of power. Random incidents of short circuit, robbery and fire at Churches and Catholic schools across Delhi came at the right time, and a new term, ‘intolerance’, entered India’s public discourse. The BJP was blamed for these, and most other such incidents over the next five years, and the government’s actions against separatists and the ‘Bharath tere tukde honge’ gang were also cited as proof to claim that India under Modi was becoming intolerant towards dissenters and minorities.

This, even as the workers of the BJP suffered the Left’s onslaught in Kerala and were lynched under Mamata Banerjee’s rule in West Bengal. But nothing stuck, and the BJP returned to power with a larger majority last week.

However, nothing appears to have changed for the workers and supporters of the party. They continue to be at the receiving end of violence not just in non-BJP states like West Bengal, but also where the party is in power.

Members of a family were beaten up by a group of men from the Yadav community for voting for the BJP. The victims, identified as Pawan, Manish and Kallu Dwivedi, said Ramchand, Dinesh and Shivam Yadav had asked them on 12 May, when Prayagraj went to polls, to vote for the Samajwadi Party (SP) instead of the BJP and threatened them with violence. On Sunday, the three SP supporters not only attacked Pawan, Manish and Kallu, but also misbehaved with the female members of the Dwivedi family. According to reports, a First Information Report has been filed in this case.

A family in Etawah was attacked by 40-50 supporters of the Akhilesh Yadav-led SP, at least some of whom were from the Muslim community, because it had not voted for the party of their choice. According to Hindi daily Amar Ujala’s report, the attacker entered the family’s home at night, beat up the male members of the family and eve-teased the women. The family had voted for the BJP.

It doesn’t end here. The police, reports say, refused to entertain the family’s complaint and only registered one after the intervention of Ram Shankar Katheria, BJP candidate from Etawah Lok Sabha constituency.

Etawah: Dalit family attacked by Muslims for voting in favour of BJP. Women molested, attacked inside their house by a mob. https://t.co/ZGBSH2vUhF

In eastern Uttar Pradesh’s Ghazipur, which is one of the few Lok Sabha seats the BJP lost in the state, a man named Rambachan killed his wife because she had voted for the BJP instead of choosing the Mayawati-led BSP. The victim, identified as Neelam, was attacked with a spade, a tool used for digging. According to the report, relatives of the couple have confirmed that the conflict between the two was a result of Neelam voting for the BJP against her husband’s wishes.

In Madhya Pradesh’s Indore, a worker of the BJP was allegedly murdered by a Congress leader and his sons, Hindi daily Bhaskar reported. According to the police, the BJP worker, identified as Nemichand Tanvar, had an argument with local Congress leader Arun Sharma, who had threatened to deal with him later. The same evening, he was murdered, the news report says. Victim’s mother Pushpabai and son Basant were also injured in the attack, the reports added.

A BJP worker was killed in Maharashtra in an altercation following a heated debate over the elections, reports DNA. The incident took place on Friday evening at Mohalla village in Akola district. Mateen Patel (48), the victim, a BJP minority cell worker, had a dispute with a group of people from his community who supported the opposition parties, the police said. Patel and his brother were attacked by a group of 8-10 people. A case has been registered under IPC against 10 persons including Congress leader Hidayat Patel, said the police sources.

A worker of the BJP was killed just days after the declaration of the results in which the BJP made major inroads in the state, dashing the Trinamool Congress (TMC) leader and Chief Minister Mamata Banerjee’s hope of becoming Prime Minister with support from other opposition parties. The worker was allegedly killed by workers of the TMC, like in many other cases of violence in the state.

Another BJP worker, identified as Santu Ghosh, was shot dead in West Benga’s Nadia district. A 25-year-old youth has been arrested in this murder case. Although the police has said that they have not found any political links, many have dismissed this assertion accusing the police of being a puppet of the ruling TMC. Ghosh had reportedly quit the TMC to join the state’s BJP unit.

Two BJP worker, identified as Shibu and Apu Das, were attacked and killed in cold blood, the Times of India reported. Just days back, another party workers, Mithu Bhowmik, was murdered in the city. Multiple other incidents of attacks on workers have been reported in Tripura since the results were declared.

In Hapur’s Karanpur village, a BJP panna pramukh (party worker in-charge of one page of voters' list) was killed while sleeping outside his home.

In the erstwhile Congress bastion Amethi, where BJP’s Smriti Irani defeated Rahul Gandhi, a local BJP leader was killed just two days after the results were declared. The BJP leader, a close aide of Smriti Irani in Amethi, was shot when he was sleeping in his house at Baraulia village. He died during treatment.

At least three people have been arrested by the police in this case. The BJP has claimed that the killers of the BJP leader are linked with the Congress.

A Muslim woman was attacked in Meerut by a BSP leader, identified as Hanif. The woman, a report in Patrika says, was in hospital for six days. Identified as Nausab, she had voted for the BJP instead of the gathbandhan. The police had initially refused to register a complaint against the attackers.

In Muzaffarnagar, a son, upset with his father for voting for the BJP, threatened to kill him, Punjab Kesari reported. According to the daily’s report, the victim, identified as Amir Alam, said he considers Narendra Modi as his relative because his wife is from Gujarat, the Prime Minister’s home state. The police, however, suspects that the issue could be related to a property dispute.

In Moradabad’s Galshaheed, two brothers, Jafar and Junaid, were shot because they had voted for the BJP, their family claimed. But according to the local police, a conflict has been brewing between the two sides for some time due to a property dispute. However, Rais Qureshi, a family member, claimed that he and his nephews are linked to the BJP and that is why they were attacked.

In Faridabad’s Gumat Bihari, a farmer named Fajru was attacked by a group of Muslim men, identified as Taufeeq, Naseem, Raqib, because he voted for the BJP. The men from the minority community stopped him while he was returning home from his tubewell and asked him to explain why he did not vote for the Congress. Fajru, who was taken to the local government hospital in a critical condition, said the men took away Rs 30 thousand that he was carrying.

A woman was beaten up by goons for voting for the BJP in Bulandshahr’s Mustafagarh village. According to the women, whose video has gone viral, she was attacked by a relative named Shahid when she voted for the BJP instead of Mayawati’s Bahujan Samaj Party, which the goons were supporting.

These incidents were curated by Vikas Saraswat in this Twitter thread.