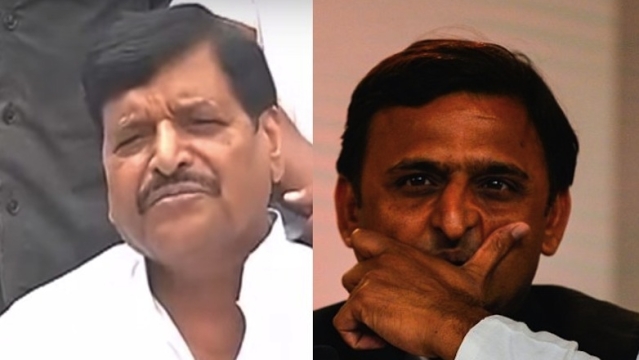 Just as when one thought that differences within the Samajwadi Party’s top leadership had been ironed over, the internecine feud has resurfaced with the party’s state president Shivpal Yadav distributing tickets to his favourite candidates with utter disdain for the chief minister, Akhilesh Yadav.

Before Shivpal began releasing the lists with the names of those with criminal antecedents and minus some of Akhilesh Yadav’s candidates, it was the inclusion of Amar Singh in the party’s central parliamentary board that was viewed as a threat to the fragile peace in the family.

The letter appointing Amar Singh, whom Akhilesh detests, was issued by none other than Ram Gopal Yadav who also is a strong critic of Amar Singh. Surprisingly, while Ram Gopal issued the appointment letter, Akhilesh did not voice his protest against “the outsider” who would have been inducted only on Mulayam Singh Yadav’s instructions.

As a member of the parliamentary board Amar Singh would have a direct or indirect role in ticket distribution. Akhilesh would be very uncomfortable with the idea of Shivpal and Amar Singh presiding over the ticket distribution process and that is why his silent acquiescence to his father Mulayam Singh Yadav’s wish is significant.

The chief minister wanted to have a say in ticket distribution for the 2017 assembly elections but as per recent developments Akhilesh appears to have been completely sidelined by his family elders.

In the first revised list released recently, Shivpal embarrassed his chief minister nephew by giving ticket to a notorious criminal from Allahabad, Atiq Ahmed, from Kanpur Cantt. At a recent function, Akhilesh had pushed Atiq from the stage to avoid being seen in his company.

The former SP MP from Phulpur is an accused in the murder of Bahujan Samaj Party MLA Raju Pal. From 1999-2003 Atiq was also the president of Apna Dal.

He also gave ticket to Sibgatullah Ansari, brother of mafia don Mukhtar Ansari. In October this year, Akhilesh had opposed the merger of Qaumi Ekta Dal, Mukhtar’s party, with the SP but was shown his place by Mulayam.

The inclusion of these two names in the party’s list is like throwing a gauntlet but this time Akhilesh seem to ignore the challenge.

Some supporters of Ram Gopal Yadav have formed an Akhilesh Yadav Samajwadi Front in the Lok Sabha constituency of his son Akshay Yadav. Heading it is a former president of the district Samajwadi Yuvjan Sabha, Anshul Vikram Singh, who made the announcement in the presence of heads of five frontal organizations of the district.

This could be a ploy to grab attention and it might also be a precursor of things to come.

Now questions are being asked if Akhilesh would be willing to campaign for Atiq and Sibgatullah. If he does, then the logical conclusion would be that he has made truce with his elders at the cost of his idealism. If he does not, then where does it leave the party?

His silence could also be a camouflage to hide his emotions. That is how some in other parties would like to interpret. These politicians expect a simmering Akhilesh to explode in a way that could leave the SP unrecognizable. According to them Akhilesh may eventually part ways with the parent party and contest elections in coalition with the Congress. Mulayam, incidentally, has ruled out any pre-poll alliance.

All eyes would be on Lucknow where the Samajwadi Party’s top leadership is slated to meet this weekend to discuss the final list of candidates and a meeting of the central parliamentary board was on the cards. Both the meetings would be crucial for the party’s future and would give a clue if all was well in the ruling family.