To Improve Ties With Lanka, India Must Remove Its Western Lenses, Put On Indic Ones 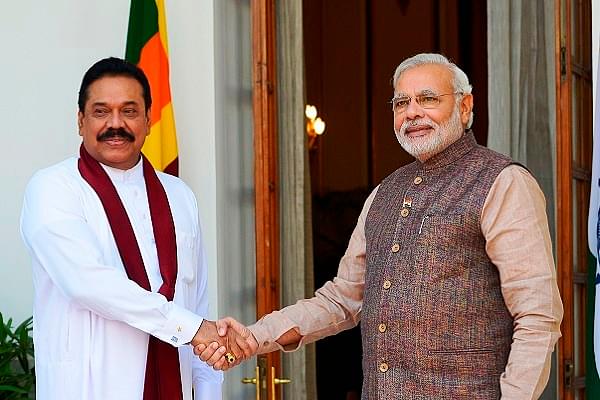 International news reports I have monitored in the last week about former Defense Secretary Gotabaya Rajapakse’s rise to power in Sri Lanka projects him as a human rights violator who detests democracy. Unfortunately, the Indian media tends to reproduce these western media perspectives uncritically.

The western media has ignored a greater story where a classic ‘velvet revolution’ instigated by western-funded civil society (NGOs) in 2014 to bring a new regime subservient to the West has failed miserably, and how their liberal fads of ‘good governance’ (yahapalanaya) has become a joke in Sri Lanka.

The ‘yahapalanaya’ government came to power with the promise of creating a liberal utopia within 100 days. When the new government took over, many of the western-funded NGO operatives were given positions in government agencies, some of which were established as part of the UN campaign for the government to account for alleged war crimes in their final push to eradicate LTTE (Liberation Tigers of Tamil Eelam) terrorism from the island.

Most Sinhalese saw this as a direct interference of western powers through civil society proxies in domestic affairs of the country.

Rather than the Bible, human rights has become the new gospel of old Western imperial powers and they use minorities such as Tamils in Sri Lanka, Rohingyas in Myanmar, and in India’s case Dalits.

The Asian media needs to look at human rights from the perspective of development rights, which is a collective one compared to the West’s narrow individual rights.

“The civil society grouping played a significant role in the high-profile 2014 project to defeat the Rajapaksas. It was an American-funded operation,” noted Island newspaper’s editor Shamindra Ferdinando in a commentary last week.

“The result (of November 16 election) clearly proved that the grouping was only some people’s civil society”, he adds.

In addition to the Central Bank bond scam and many other corrupt deals of the President Sirisena and Prime Minister Wickremasinghe ‘yahapalanaya’ government, an important issue that has riled the Sinhala Buddhist majority was the government’s surrender to western human rights lobbies and the UN Human Rights Council (UNHRC) in particular.

In September 2015, Foreign Minister Mangala Samaraweera signed a co-sponsorship (with the US) of a resolution at UNHRC calling for the Sri Lankan government to account for alleged war crimes, when one of the most feared terror groups, the LTTE, was finally crushed in May 2009.

For most Sinhalese, the campaign smacks of pure hypocrisy on the part of the UNHRC when the US and NATO have been involved in far worse war crimes in their war against terrorism, and no such accountability is asked of them.

President Rajapaksa said during his election campaign that he will not recognise this resolution.

The resolution, it is believed, included provisions for war crimes tribunals to be set up in Sri Lanka with foreign judges. This was seen by most Sinhalese as an attempt to recolonise Sri Lanka, and President Sirisena had to reassure them many times that he will not allow such courts.

In March 2013, when this resolution was adopted for the first time, India voted for it. The decision to do so by the then Manmohan Singh government was seen in Sri Lanka as a slap in the face by a great friend and neighbour.

It was the first time India voted against Sri Lanka in such a forum. It led to huge anti-Indian feeling among the Sinhalese.

I was at a T20 cricket world cup game in Colombo a few months later between India and Australia, that the Sri Lankan fans were chanting throughout the game “India go home”.

Normally, in such a game, Sri Lankans would have supported India, but, this time, they were cheering for Australia.

For too long, India’s foreign policy has been dictated by Tamil chauvinistic politicians in Tamil Nadu, particularly during the Congress government of Singh.

In fact, there is a lot in common between the Northern Indian Hindus and Buddhist Sinhalese. The latter go on pilgrimage to Buddhist sites in northern India in their thousands each year.

Prime Minister Narendra Modi seemed to have realised the folly of this foreign policy, when, during his trip to Sri Lanka in 2015, for the first time, an Indian Hindu prime minister attended a Buddhist ceremony at Sri MahaBodi in Anuradhapura and was blessed by Buddhist monks.

The world’s oldest Bodhi tree is a sampling of the Bodhi tree in Bodhgaya and was brought to Sri Lanka by Emperor Ashoka’s daughter Bhikkuni Sanghamita.

Unfortunately, Modi’s Buddhist diplomacy did not work that well with a Sri Lankan government that was seen inside the country as largely anti-Buddhist.

However, with the election of President Gotabaya Rajapakse propelled to office on the back of a Buddhist nationalist platform, this could be a trump card for India.

In fact, Buddhism went to these countries via Sri Lanka after the Buddhist cannon Tripitaka was written in Sri Lanka in 1st century BCE.

India’s Buddhist tourism drive could also include Sri Lanka and the SAMVAD movement started by Modi and Japanese Prime Minister Shinzo Abe to develop closer Hindu-Buddhist alliances to avoid conflict and protect the environment in Asia.

With Sri Lanka’s close links to China, and the latter’s desire to project itself as a modern Buddhist nation, Sri Lanka could be a match-maker between India and China in forging a great Asian cultural alliance, especially to counter threats to both Buddhism and Hinduism in the aggressive expansion of evangelical Christianity and Islamic extremism in Asia.

India also needs to show commitment to defending Sri Lanka in fora like UNHRC against unproven and largely exaggerated claims of human rights violations in the final stages of the war against the LTTE.

India could well become a victim of such witch-hunts with regards to Kashmir, if the West succeeds in pinning down Sri Lanka.

Indian media needs to also understand that Sri Lanka tilted towards China after India betrayed its neighbour by siding with the West.

They also provided arms to Sri Lanka during the war with LTTE when the West refused to do so.

Switching to English, President Rajapakse said in his inauguration speech that his government will practise a neutral foreign policy and will try to steer away from geo-political power games.

“We request all nations to respect the unitary nature and sovereignty of the country, when maintaining relations with us,” he urged.

Thus, the Rajapaksa government would have a balanced approach to relations with both India and China, unless India provokes them like they did in 2013.