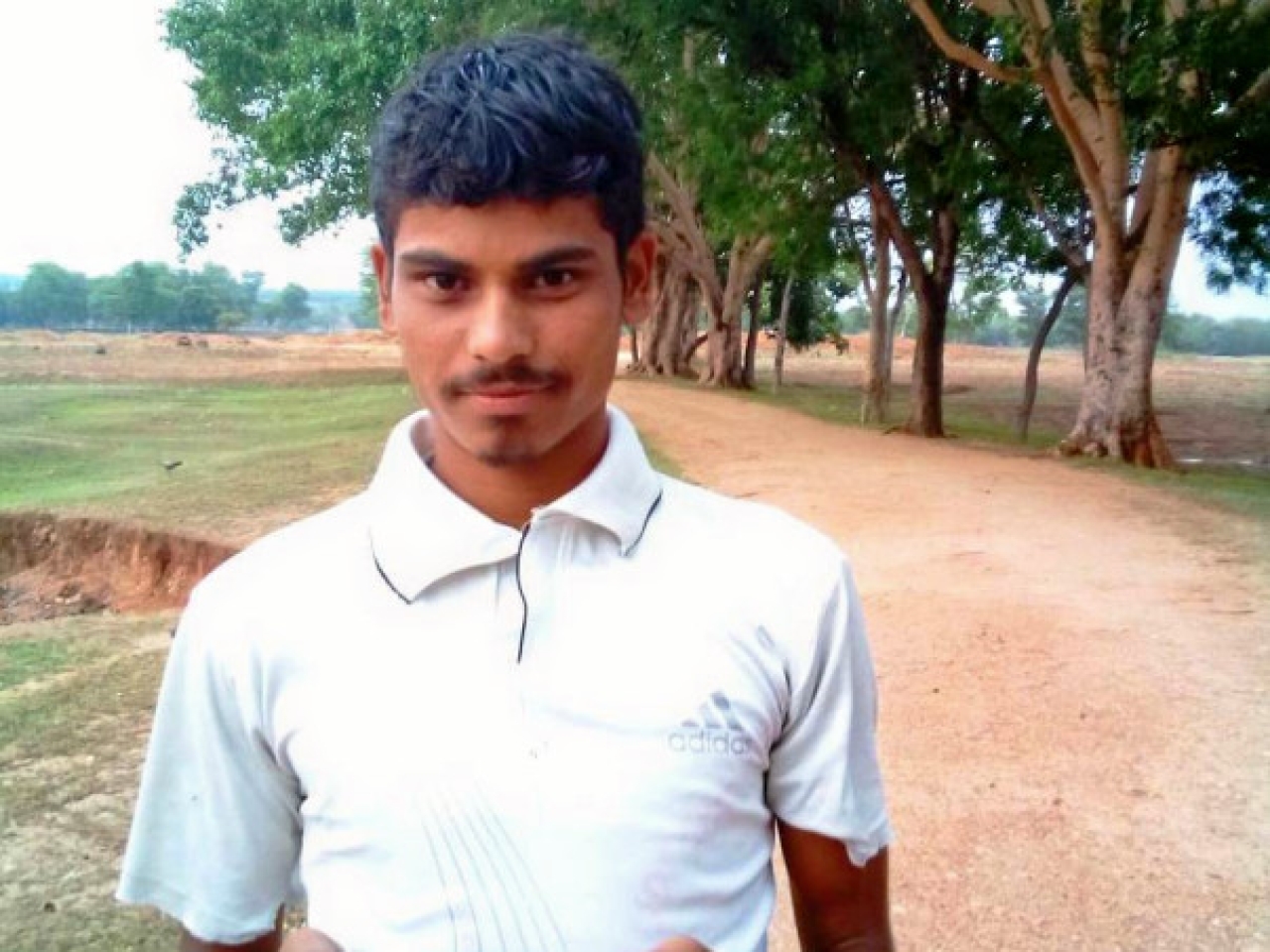 By now, Trilochan Mahato’s name needs no introduction. The name of the 20-year-old history honours undergraduate from a backward village in Bengal’s remote Purulia district has hit national headlines. But not in the way Trilochan would have wanted to.

The tall, lithe Dalit boy was, according to his family and residents of his native Supurdih village in Purulia’s Balarampur block (about 335 kilometres northwest of Kolkata), hanged from a tree in a nearby jungle for being a leader of the Bharatiya Janata Party (BJP) Yuva Morcha. He was a bright student and had struggled hard to study. He always dreamt big and was an inspiration to many other youngsters in his village.

Today, everyone in the village is shattered and their aspirations lie in tatters. A pall of gloom had enveloped Supurdih, a village of some 100-odd households. An uneasy calm has descended on the village with its neat mud houses and narrow streets, the calm shattered occasionally by sobs and wails of Trilochan’s distraught mother, aunts, and some neighbours who used to love him. His parents haven’t slept ever since Trilochan’s body was found hanging from a tree on Thursday morning. His body had been taken away for post-mortem examination and, till Thursday afternoon, the villagers were still awaiting its arrival. Some neighbours have taken it upon themselves to arrange for the cremation and were talking in hushed tones, finalising the arrangements.

Trilochan’s father Hariram, who works as a supervisor in a grocery store in Balarampur town and earns Rs 6,000 a month, says his son was a good student. He also extols other qualities of his dead son: “He was very obedient and dutiful and would help his mother in household chores. He was very helpful towards the neighbours also and they used to love him. Trilochan was a devout child, he would go to the Shiva mandir at Patidih every Monday. He used to pray to Bhagwan Shiva everyday and had no bad habits. He would also ask the kids in the village to be devout and respect elders,” said Hariram.

Trilochan got to know about the BJP while watching television at a local club. “He was very interested in current affairs and politics from a young age and when the BJP unit at Balrampur was formed about five years ago, he expressed his desire to join the party. He was in class X at that time. We tried to tell him that politics is dangerous and can be dirty also, but he would argue that if good people didn’t join politics, there is no hope for the country. He was very mature for his age,” said Hariram.

Trilochan would tell his father that after graduation, he would take the state Teacher Eligibility Test (TET) examination and become a school teacher. “He used to tell me he would crack the test at the very first attempt. ‘You will not have to work anymore at the shop after that. I will save enough money from my salary and you can start your own shop. Dada (his elder brother Shibnath who works as a labourer) will also join you in the business,’ he would tell me. I would also dream of starting my own little shop in the village and earn enough to buy a television and a refrigerator and replace the tiles on the roof of our house with concrete slabs. But who would know that fate would deal such a cruel blow to us,” rued Hariram.

After school, Trilochan decided to pursue humanities. He liked history and his favourite heroes were Prithviraj Chauhan, Chhatrapati Shivaji, Netaji Subhas Chandra Bose, Khudiram Bose and some other freedom fighters. “He would tell young kids in the village tales about the bravery of his heroes. He would tell them to fight for the ideals they believe in. He would often speak to us for hours on what needs to be done to make Bengal and India prosperous and proud. He was a dreamer and we would often tell him so. He would laugh and say he was happy to be a dreamer. He wanted to make a name for himself. He said he would start off as a school teacher and then do his PhD and M.Phil, join a college and then teach at Calcutta University. He used to tell our mother that as a college and university professor, he would go to many foreign countries and there he would tell everyone about his Supurdih village. ‘Many people will come to know of Supurdih then,’ he would say. Yes, many now have come to know the name of this village, but not for the reasons that my brother had dreamt of. He is no longer there to speak of Supurdih,” sobbed Shibnath.

Trilochan was such an enthusiastic activist of the BJP that the party made him the secretary of the Balarampur unit of the Bharatiya Janata Yuva Morcha (BJYM). “He was a shining example to other youngsters with his zeal, sincerity, total honesty and uprightness. He had a strong moral character and would go to any extent to uphold and fight for what he believed in. He strongly felt that politics is a platform to serve people and reform society. He was an ardent fan of (Prime Minister) Modi and I remember when posters of Modi first reached our block office in early 2014, he took one home and framed it. He used to say that Modi is the man who will transform India and make it a front-ranking nation in the world,” said BJP’s Purulia district chief Vidyasagar Chakraborty.

It was this boldness and unwillingness to back away from what he believed in that cost Trilochan his life, say his many admirers in the BJYM. “He was an ideal we would strive to follow. He would have made a great leader,” said Shoumik Das, a BJYM activist. In the run-up to the panchayat polls last month, Trilochan started campaigning vigorously for the party and mobilising support for BJP candidates. “He had a fan following not only in his village, but other neighbouring villages where people knew him and admired him. People, young and old alike, gravitated towards him and when he started speaking at small gatherings, his straightforwardness, personal integrity and charisma won him many supporters. It seemed he was a born leader and was destined for great things in life,” said Das.

Trilochan’s growing popularity attracted the attention of local Trinamool leaders, who then approached him to switch sides. Trilochan, say his colleagues in the BJYM, was aghast and flatly refused. “He told them (the Trinamool leaders) in no uncertain terms that he believed in the philosophy and ideology of the BJP and wanted to serve the country through the party. He told them he would never change his political beliefs and he could never be bought,” said Sukumar Mahato, another BJYM activist of Purulia. After that, local Trinamool leaders and their henchmen started hounding Trilochan. But that didn’t scare him at all. “We used to tell him to be careful and even lie low till the panchayat polls were over. But he said Bhagwan Shiva would protect him. Now, Bhagwan Shiva has taken him away from us. Perhaps that was what He wanted,” said Hariram.

According to Hariram, local Trinamool leaders like Nabakishore Mahato (the karmadhakshya of Balarampur panchayat samity, has been named in the FIR lodged by Hariram with the police) issued death threats to Trilochan. “They would warn him against working for the BJP and being associated with the BJYM. They had told him many times they would kill him,” said Hariram. Taking cognisance of the threats from the Trinamool, local BJP leaders also warned Trilochan against moving around alone. “We would insist that he be accompanied by a strong team comprising at least a dozen party workers whenever he would go out campaigning. We had asked our activists at Supurdih to never allow Trilochan to venture out alone from his house even on personal work,” said Nabakishore Murmu, a local BJP leader.

But after the elections were over and the BJP posted an impressive victory in the panchayat polls in Balarampur Block, Trilochan and the others let their guard down. “We could never imagine that even after so many days, the Trinamool would exact revenge,” said Murmu. But Murmu, Trilochan and the others ought to have taken note of the warning issued by Trinamool MP and Mamata Banerjee’s nephew Abhishek Banerjee a few days back. Speaking at a rally, Abhishek had said he would go to Purulia on 1 June and wipe out all opposition from the district. “I will make it opposition free,” he had declared.

Around 5 pm on Wednesday, Trilochan donned his favourite white Adidas T-shirt and stepped out of his house. “He had missed a few classes in college and had borrowed notes from a classmate. He said he was going out to get the notes photocopied. I asked him to be careful and come back soon,” recalls Hariram. Trilochan got on his new bicycle (bought two months ago with money he had saved from his scholarship) and sped off to the local market. That was the last Hariram saw of his son. When Trilochan didn’t return home even after two hours, Hariram asked Shibnath to call him on his mobile. Trilochan replied, saying he would be back in an hour. Around 8.30 pm, Shibnath received a call from Trilochan’s number. “I was busy with some household chores and the voice at the other end, which I had presumed to be that of my brother, said he was being held hostage by some people. The line was disconnected and the phone went dead immediately after that,” recalled Shibnath.

Trilochan’s father and brother, along with their neighbours, launched a hunt. But they could not trace Supurdih’s favourite son. The next morning, around 7 am, some villagers found Trilochan’s body hanging from a tree at the edge of a jungle. On the back of his favourite white T-shirt was scrawled the chilling message that he dies for being a BJP worker at the age of 18. Nearby was another handwritten note stating the same.

All that remains of Trilochan today are his memories. Memories of Trilochan being a bright student, a dutiful son, a devout youngster, a helpful neighbour, an ideal child that his neighbours would hold up to their own children as a shining example, and an honest, upright, diligent party worker brimming with enthusiasm and zeal to his colleagues in the BJYM. On the other wall of his house, just by the main door, Trilochan had drawn a large lotus, the BJP symbol, just a week ago. Hariram says he will preserve it forever as a memory of, and tribute to, his son. Quite an appropriate reminder of Trilochan.

Trilochan’s death has not only doused the dreams of his parents, but also the aspirations of the people of Supurdih. There never will be another like Trilochan, they murmur.