Was It A Plot To Assassinate The Prime Minister? 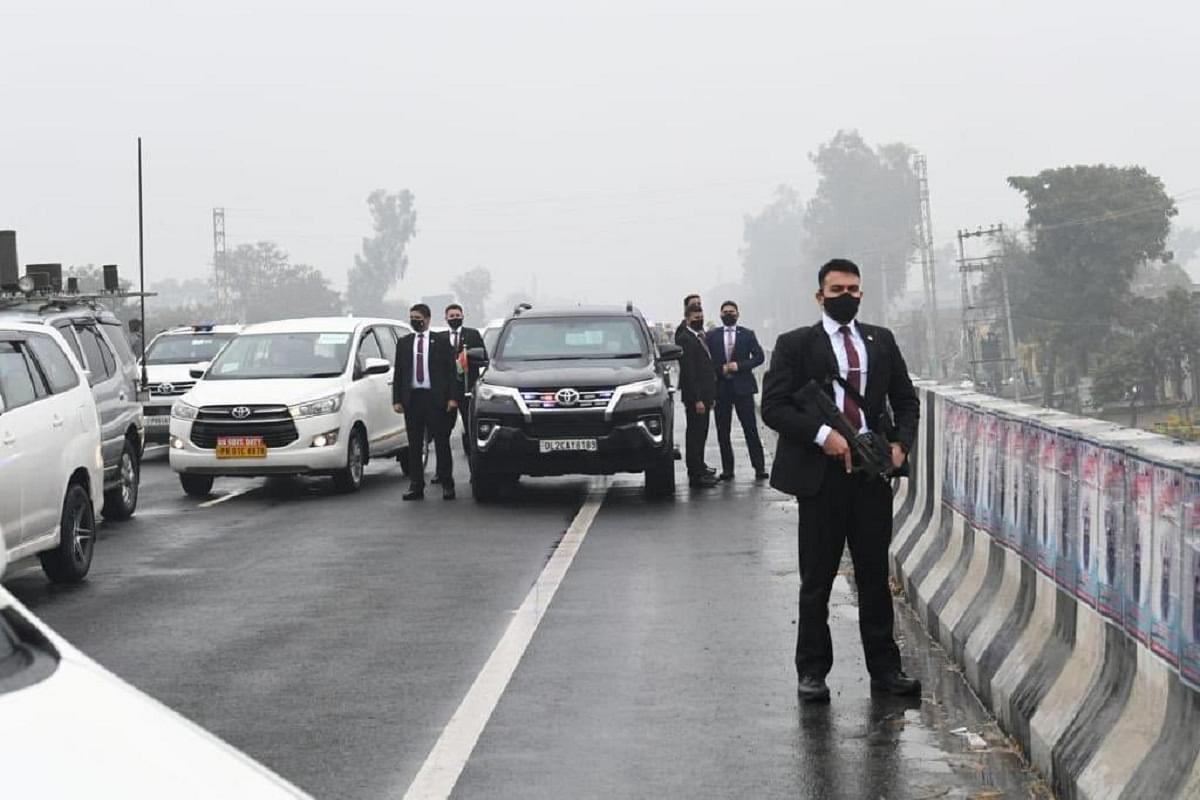 The events on 5 January were shocking: the Prime Minister’s motorcade was stopped for 15 to 20 minutes on a highway overpass, blocked by a group of ‘protesters’. His car, the only black car in the row of white cars, was completely exposed to a possible drone attack, a Stinger missile, a rocket-propelled grenade, or even an IED that could have demolished the structure.

The enormity of this situation, and the implications for India’s national security, are astonishing. Here was the Prime Minister of the country with the world’s fifth largest economy and third largest armed forces, a sitting duck, at a location only a few miles away from the Pakistani border.

It cannot be seen as an attack on Narendra Modi, the man, but on the institution of the Prime Minister, and by extension on the government of India. This, in a country where two prime ministers were earlier assassinated. It is almost an existential question. What would happen if Modi were to be killed? I hasten to add that I am certainly not advocating it, as he is the Prime Minister, and I have been a fan of his for long. But we have to think of what happens in that eventuality.

The same question was asked earlier: what would happen if Modi were to lose the elections? Well, not much. Modi would take his small suitcase, and, as in the famous painting, alight from the train in his hometown in Gujarat and walk home alone, in the rain, with his umbrella. It is not "Après moi, le déluge" as in the Nehruvian vanity: somebody will rule.

But the nation will be the loser, just when it is at the cusp of inflection.

There have been other dramatic moments in Indian history where one man made a difference. The stray arrow that pierced the eye of Hemachandra Vikramaditya at the second battle of Panipat doomed north India to centuries of Gurkaniya Timurid rule. The beheading of Rama Raya of Vijayanagar by his own renegade troops at the battle of Talikota caused the disastrous end of that bulwark that had protected south India against invaders from the north.

It may not be that bad this time if there were to be, in Karan Thapar’s immortal words in 2007, “the sudden removal of Modi”. There are others that could step in. But surely, momentum will be lost, and all those malign forces urging ‘regime change’, especially the deep state and China and their psy-warfare organs, such as the New York Times and Global Times, will smell blood.

I also personally do not think it was an assassination attempt. If it were, it would have succeeded because there was nothing to prevent it. It was more a signal to Narendra Modi that if he dared enter Punjab again, he would be executed. The real question is, what will happen next?

We have seen this movie before. In West Bengal, there was massive election-related violence and the wanton killing of Bharatiya Janata Party (BJP) and Rashtriya Swayamsevak Sangh (RSS) people by Trinamool Congress (TMC) cadres. In Kerala, there have been dozens of murders of BJP/RSS people by communists or Islamists.

There were at least two earlier attempts on Modi himself: the first when Ishrat Jehan, Javed (born Pranesh Pillai) and a Pakistani were intercepted driving to Gujarat to eliminate him. The second was the bomb that went off minutes before Modi was to speak in Bihar during election campaigning some time ago.

If I were to extrapolate, the federal structure of the Indian Union is itself under strain: opposition-ruled states are acting as little personal fiefdoms that are, in effect, independent nations with only a tenuous link to the Union government.

For instance, just last week, the President of India was apparently humiliated when he had to cool his heels in the Kerala Raj Bhavan after an honorary D Litt to him was denied, allegedly under pressure from the state government (which, however, cleared D Litts for an actress, Shobhana, and a musician, T M Krishna).

Opposition-ruled states also did not reduce excise taxes on petrol and diesel, while at the same time opposing bringing those under goods and services tax (GST). In Bengal, a chief secretary was removed by the government of India, but was re-hired by the state government. In Punjab, the Director General of Police was just installed, hand-picked by an Indian National Congress leader. There are many more instances that we all know of.

So there are undercurrents of anarchy being implemented nationwide. The bottom line is that a lot of people do not want the BJP to be in power: among them, the urban chatterati who keep pointing out that the BJP only got some 36 per cent of the total vote, while quietly omitting the fact that the sainted Jawaharlal Nehru also did not get a plurality of the vote while ruling like an arbitrary, absolute monarch for 17 long years.

There are several groups hurt by various measures taken by the government of India. Among them is the ‘Chandigarh Lobby’, a group of ex-military middlemen whose handsome commissions earned from foreign arms merchants have evaporated. This explains their schadenfreude when General Bipin Rawat was killed last month, and some of the very same group showed their dismissive contempt for the Prime Minister as well.

Then of course there are the arhatiyas, or middlemen, who have profited from the aftermath of the Green Revolution. Let us ignore the fact that excessive rice cultivation has led to water tables falling precipitously and groundwater poisoning through pesticide and fertiliser runoff. This is not sustainable: I am reminded of Californians cultivating rice in the desert (read my old column “Water Wars: Cauvery, Chinatown, and Cadillac Desert”).

Presumably, these were the ‘protesters’ who stopped the Prime Minister’s motorcade. So exactly what are they protesting against? Their demand has already been conceded: the farm bills are withdrawn. No, they have become protesters-for-rent; they are now determined to cause trouble.

And that is the proximate cause of the problem. The Indian state, various anarchists have concluded, is a soft state, and they can keep escalating their demands without consequences. These ‘farmer’ protesters (including during their Republic Day 2021 shenanigans), and earlier the Shaheen Bagh protesters, realised that they could, with impunity, hold the government of India hostage. And so they will.

What can be done? Clearly, large-scale force against them would boomerang. But doesn’t the government of India know who the street thugs are, as well as their shadowy handlers in India and elsewhere? If the government of India doesn’t know, why doesn’t it know? Where is the humint as well as the reams of surveillance camera video? How about tracking their bank accounts, money transactions and vehicle movements via Aadhaar, PAN, UPI and FAStag?

The intelligence agencies, assuming they are not riddled with moles, must identify, track, and then pick off the ring-leaders one by one, quietly. You know, the 2am knock on the door. Enough already with the kadi ninda! The state must show it will impose discipline: it has a monopoly on violence. A little bit of “iron fist in the velvet glove” is salutary and a deterrent.

The preponderant cause, though, is the ridiculous fact that there are elections all the time in India. This is a serious distraction from the job of governing the country, and politicians must figure out what will win elections, not what is good for the country. It is high time that elections were rationalised, perhaps as follows: every five years there are national elections to Parliament. Half the states must synchronise their elections with these.

In between, two-and-a-half years later there will be elections to the other half of the states (so that their legislatures also have a life of five years). If there are problems in any state and the legislatures are dismissed for some reason, President’s Rule will be imposed until the next time their elections are due. In other words, no unnecessary and frequent elections, but only to a timetable.

The root cause of the problem, however, is the Indian Constitution, which has mandated the current system of continuous elections. In general, not only for this but for other reasons as well, the Constitution needs to be rewritten because it is a prolix document, largely a cut and paste of the imperial Government of India Act of 1935, with tidbits thrown in from the US and Irish constitutions.

Both the Constitution and the increasingly bizarre interpretations of it, especially of Articles 25-30 that render Hindus second-class citizens, are problems. A constituent assembly should be set up and work should begin on a simple, 10-page document rather than a 500+ page behemoth.

It will be the job of the Supreme Court to handle nothing but constitutional cases, which requires judicial reforms, with regional courts of appeal set up to hear inter-state disputes and non-constitutional matters elevated from high courts. And the national judicial appointments commission needs to be revived as well, with a clear mandate for the legislature to approve the appointment of judges.

So there are larger problems that need to be solved. But at the moment, the attack on the Prime Minister needs to be taken as an affront to the dignity of the Indian Union, and whoever instigated or participated in it needs to be taught a lesson. Some heads must roll. Otherwise the impression that India is a soft state, especially after the mysterious death of the Chief of Defence Staff, will gain currency. We simply cannot afford that.