Mob Violence At Tagore’s Visva Bharati University: What Caused It And Did Mamata's Trinamool Play A Part? 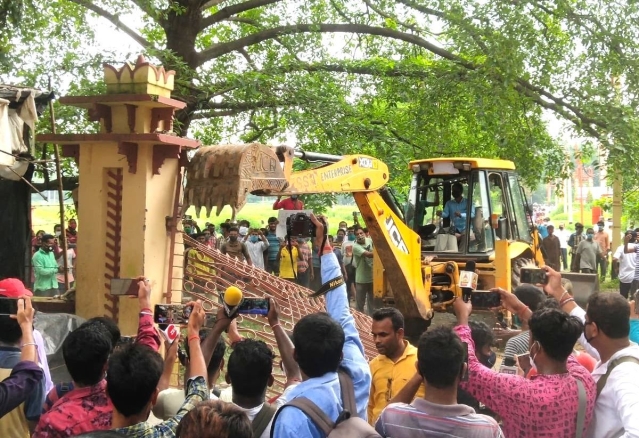 Visva Bharati University at Santiniketan (the ‘abode of peace’) founded by Rabindranath Tagore was wracked by unprecedented violence on Monday (17 August), leading to its indefinite closure.

The 99-year-old university has, over the past few decades, been periodically tormented by agitations launched by students, teachers and employees, resulting in a sharp deterioration in its standards.

And, along with that decline, a progressive souring and denigration of Nobel laureate Tagore’s dream (read this, this and this).

The immediate trigger for the violence that rocked the varsity’s sylvan campus on Monday was the construction of a boundary fence to demarcate an expansive ground where the annual Poush Mela (started by the Nobel laureate’s father Devendranath in 1894) is held.

Local people, including students and a section of the varsity’s non-teaching staff, are opposed to the fencing and want the entire ground to be open.

They say that ever since the theft of Tagore’s Nobel medallion in March 2004, Visva-Bharati authorities have been erecting boundary walls in the name of security.

Boundary walls, say locals, students and varsity employees, destroy the sanctity of Visva Bharati. “Tagore envisaged this to be a different sort of institution with vast open spaces set in the midst of nature. These boundary walls all over makes the campus feel like a vast prison complex,” said Taposh Bhadra, a university employee.

But varsity authorities say that the real reason behind the opposition to erecting boundary walls or fencing the university’s properties is to foil the authorities’ bid to evict encroachers.

“Many portions of Visva Bharati’s campus have been encroached upon by locals. Even former teachers and employees of the varsity who have settled down in Santiniketan have encroached on the campus,” said a former Registrar of the central university.

This allegation is true: an audit of the university’s campus would reveal that even ashramites — long-time residents of Santiniketan who have, or had, links with Visva-Bharati — have encroached on the campus.

“Some former faculty members built their houses right next to Visva-Bharati campus in such a manner that the approach road to their residence used to pass through land belonging to the university. Portions of some of these houses fall in university land. Residents of many villages around Santiniketan have built houses and shops on the university's land. Encroachment is rampant and is continuing,” said the former Registrar.

The Poush Mela grounds that the varsity authorities want to fence off has also been encroached upon by some petty traders.

Fencing will result in their eviction.

“Successive Vice Chancellors in recent years have tried to enforce discipline among teachers and non-teaching staff of the varsity. They have tried to discipline students and also enforce rules, regulations and statutes of the university. And they have faced opposition from vested interests. Most students, teachers and non-teaching staff of Visva Bharati don’t want to adhere to rules and regulations, and they quote Tagore in support of their waywardness,” said a former Proctor who had frequent run-ins with students and employees.

Political parties — the CPI(M) in the past and the Trinamool now — have supported encroachers and indisciplined students and employees for their own political interests.

On Monday, the attack on Visva Bharati property by a 10,000-strong mob happened in the presence of Trinamool MLA from Dubrajpur (an Assembly constituency in Birbhum district where Santiniketan is located), Naresh Bauri.

Bauri is an alumnus of Visva-Bharati and said he was not there as an MLA, but as a citizen and an alumnus who is opposed to boundary walls being erected all over the campus.

That the protests had the Trinamool’s blessings became evident from what Chief Minister Mamata Banerjee said soon after Monday’s vandalism.

“Visva Bharati is a central university. I don't want any construction there which will spoil nature's beauty. I request the vice-chancellor to consult the DM and SP. There should be no such things in Bengal which will destroy the culture and heritage of Bengal,” said Banerjee.

West Bengal Governor Jagdeep Dhankar, who is also the university’s Rector, tweeted his anguish soon after the attack and tagged Banerjee to his tweet.

The Chief Minister then spoke to the Governor and assured him that steps were being taken to restore order.

The varsity authorities also informed Prime Minister Narendra Modi, who is Visva-Bharati Acharya (Chancellor), on Monday and conveyed to him their decision to shut down the institution indefinitely.

“She stands with those who oppose the erection of fences and boundary walls for petty political ends. It is sad that the Chief Minister stands with wrongdoers,” said a senior Visva-Bharati official.

“But the issue is much more than erecting fences or boundary walls. It is more about adhering to the rule of the law, to regulations and to discipline. Tagore never advocated anarchy and those who take refuge in Tagore to explain their waywardness have little understanding of the poet-philosopher’s teachings and thoughts,” said the official.

17 August will go down in Visva-Bharati’s history as a black day and one that marked yet another step in the institution’s steady decline.