What Exactly Is Preventing A Congress-SP Coalition in Uttar Pradesh? 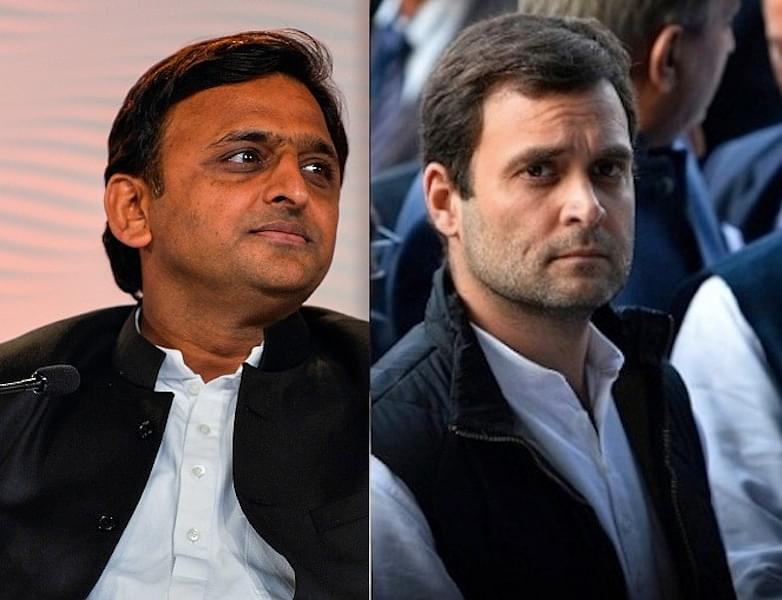 It is almost a year or more since we have been hearing of a possible coalition between the Congress and the Samajwadi Party (SP) or of a larger mahagathbandhan that would include Ajit Singh’s RLD, Nitish Kumars’ JD-U and Lalu’s RJD as well, in the coming Uttar Pradesh (UP) assembly elections in January-February 2017. Congress strategist Prashant Kishore is after that and UP CM Akhilesh Yadav is also optimistic to win 300 seats if it was to materialize.

Then what are the hiccups? What prevents the coalition or mahagathbandhan from happening?

Many think that it is just the seat sharing or Muslim votes that form the core constraint in the move. The fact of the matter is otherwise. The move is linked to the larger desire of Mulayam Singh Yadav to become the Prime Minister of the country. A year back, in December 2015, Akhilesh had indicated his formula; let SP and Congress not restrict the coalition to UP only, let it be on a larger national design in which Mulayam becomes the PM and Rahul Deputy PM if the coalition comes to power after next Lok Sabha poll in 2019. Perhaps, it is this proposal that the Congress party is not prepared to accept, and rightly so, because the SP is state party and it could be humiliating for a national party like Congress to play second fiddle to the regional party though Mulayam is by no means is a regional leader.

But, does the Congress really have an option? Has Rahul not demonstrated his utter incompetence and lack of inspirational leadership to his party and the people at large? Is there still a doubt that Rahul has to still mature for the job? And, hence, for the Congress, the stakes may not be too high to accept the proposal of the SP for many reasons.

One, in the 2019 LS polls, Rahul may be no match to Modi in the leadership contest; two, SP being a regional outfit, would not be demanding any LS seats outside UP and hence, Congress will have full liberty to be generous to its UPA allies in respect of seat sharing in other states. As far as UP is concerned, there should not be any difficulty in view of Congress’ performance in 2014 Lok Sabha elections where only Sonia and Rahul managed to get elected from Rae Bareily and Amethi respectively.

Thirdly, such a move will greatly strengthen all forces against BJP and would give Modi and BJP a united and tough fight. But, then, that will also give Modi and BJP a chance to get a clear verdict for their work done and work proposed and could make the ruling dispensation a bit more confident and aggressive in going for major systemic reforms which the country awaits.

On the provincial scenario, there could be some immediate irritants in the Congress-SP deal materializing. One is the sudden turnaround in Mayawati’s social engineering where she is abandoning her Dalit-Brahmin coalition and campaigning for Dalit-Muslim coalition. This has sent panic waves in SP because the party claims massive Muslim support. In several western districts, Muslim population percentages have risen above 40% (Rampur which has 50% Muslim population). That area is potential target for the SP because in 2014, all 17 LS seats here were won by the BJP. The SP wants to capture many seats there and in other parts through Muslim support. If Mayawati is courting more Muslims and if SP fails to put up candidates in several constituencies, which might be required to cede to coalition partners, then many Muslims may turn to other parties as well. That could also be a permanent loss to the party.

Secondly, the SP may face an internal revolt. Obviously, all assembly constituencies that are transferred to the coalition partners may suddenly come as a bolt from the blue to party contestants who might have done some spadework in anticipation that they have to fight the election. Such candidate may turn to other parties, mainly BJP or some other small and marginal party in the kitty of BJP that may also erode the base of SP in those constituencies. And, since SP will have to cede more than 100 seats in any seat sharing arrangement, it may deprive it of one-hundred party contestants and that may come as a embarrassment, especially when the party is trying to recover from the recent family feud and consequent cadre-war.

Thirdly, any confusion among cadre may lead to disjointed election campaign of the coalition partners though many may like to compare the scenario with the Bihar experiment where Lalu and Nitish were able to sync their cadres very well. But, there is a difference; in Bihar both Nitish and Lalu had been in power recently and their cadres were in place and active, whereas in UP all the coalition partners including Congress, and excluding SP, have hardly any presence, let alone cadre! So, while a coalition may benefit in some way the Congress, it may not be rewarding to the SP.

Whether SP and Congress would be able to reach out to any compromise on the macro and micro issues involved in the coalition or mahagathbandhan, only time will tell. But, if it comes out, BJP and BSP may have to redesign their mobilization and campaign strategies.