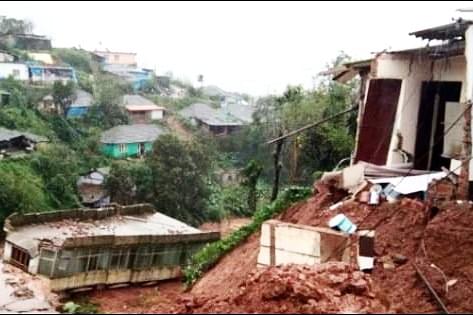 Two weeks after the beautiful Kodagu was destroyed by rains, floods and mudslides the people of the region are trying to pick up the pieces of their lives where they left off after the deluge.

According to an estimation of the district administration 12 per cent of its landmass including towns, villages, coffee estates, roads, public places, resorts, water storage, infrastructure have been washed off fully or partially, over 5,000 people have been left homeless and over 2,800 people still do not know where to go and are still living in relief camps.

The central disaster management team experts who visited Kodagu have surveyed the damage and while another technical team put together by the Institution of Engineers of Mysuru under the leadership of Major General S G Ombathkere (retd) has also observed that the damage to Kodagu’s economy has been extensive and more than what it has been projected.

The report has outlined extensive destruction of forests, construction of roads in places where they were not required or where there was no plan for motorable roads, and careless property development. “This was more a manmade disaster building over the years rather than a natural disaster,” the committee has observed with a caveat that “rains were heavy too, but had not the development been so irrational the magnitude of the disaster could not have been so extensive and devastating”.

People who returned to their houses, especially in Madapura, Jodupala and Kushalnagar housing colonies, find it impossible to live there as there is nothing left for them anymore. “Those who were leading comfortable lives earning good income have now lost everything, with some lucky few having been able to retrieve their documents with great risk, though, but that percentage appears to be very small,” Jyoti Mandanna told Swarjya at Madikeri relief centre.

“It is so humiliating for me, my two daughters and wife to eat out of plates donated by somebody, every morsel we consume is accounted by the district officials,” he said.

“I appealed to them to not make us feel so small and to treat us with respect and compassion, god forbid this situation will ever happen to anyone else. What we have gone through was something unprecedented. We lost overnight everything - our house, vehicles, documents, livestock and estate and we are now sheltered in the relief camps” Mandanna said.

When Kushalappa and his brother Nanjappa, who had a farm house in Madapura, returned to the place where they once lived, they could find “no trace of our farm house”.

“We couldn’t even locate the place, but recognised it’s the place we lived when we found our jeep buried till the top, its radio antenna sticking out of the mud. But again nobody will be able to dig it out for us as the terrain is barely approachable” they said.

According to the MLA Appacchu Ranjan, the relief workers from various organisations have attempted to take the affected people back to their homes, but only 1 per cent of the people could identify their homes and about 10 per cent of them found it impossible to continue living there. “We are bringing pressure on the state government to speed up the rehabilitation colonies. We have identified over 200 acres of land in different places inside Kodagu district, where we are building pucca houses at Rs 7 lakh each - the government, many corporates and other organisations have come forward to pitch in matching grants for the rehabilitation programme. There is no question of building these colonies anywhere else than Kodagu” Ranjan told Swarajya during a visit to the relief camps in Madikeri.

Another MLA from Kodagu K G Bopaiah said: “there are people who have lost over 20 acres of land including the coffee estates and farm land, houses and vehicles. Though the losses are extensive on an individual basis, we will try to rehabilitate them in suitable ways. We have already been promised a sizable funding from the Chief Minister’s relief fund”.

In another development, the Madapura Holay and the Atti Holey have changed their course due to landslides in many places. The rivers are the two major tributaries to Cauvery, and the state water resources department officials said that their inflow into Cauvery will be affected in the next monsoon, with the Kodagu region having got its full quota of rains for the year in just one week in the current monsoon. This also explains the reason behind the mudslides. Over 80 per cent of the land mass of Kodagu is unaffected by the rains and landslides, but in the 12 per cent of the land mass, the damage has been extensive where no farming, plantation activities can be taken up anymore.

The department is examining an expert report if the seepage from the Harangi dam had any role to play in the loosening of soil and the impact of a 3.4 magnitude quake that was reported to have occurred on 9 July 2018. Karnataka State Natural Disaster Monitoring Corporation has termed it as microtremor.

The catastrophic landslide in the Harangi Reservoir catchment area of North-western Kodagu has severely affected in 7 Codava Naads (communes). “Displaced victims from here are on the streets now, and there is a need to rehabilitate them in a dignified manner,” Codava National Committee president N U Nachappa Codava told Swarajya.

“All these efforts require the setting up of an exclusive ministry comprising all relevant departments for taking responsibility of the landslide victims, and help to permanently rehabilitate them.”

“Media projection of Kodagu is completely wrong. A section of the media reported that Kodagu was not completely devastated, only a few areas have been affected, and where leading a normal life was not possible,” said Codava.

“This projection will result in the real victims being ignored and the disaster being glossed over as crop loss and illegal riverbank encroachment, and the government might try to dismiss the entire thing as common phenomena and refuse to give as much help as necessary, and wash their hands off it”.

The Codava National Committee (CNC) has also expressed dismay over the state government underplaying the severity of the disaster. “The areas in the 20×30 kilometre radius of 7 Codava Naads of North-western part of Kodagu region, was severely affected and if projected properly, will be eligible for receiving United Nations Disaster Management funds and other international disaster relief funds as well as help from the Diaspora community,” said Codava.

“Sadly many NGO's are forcing people to sign away their properties to the forest department on the promise of a new home and provision of living expenses. Such a portrayal will also help bring in donations from foreign organisations, and no one knows if this will help victims,” Codava alleged.

He also said some unscrupulous elements were opening bank accounts and advertising them as places to donate for the relief funds and there are more than 1,000 such accounts. This needs to be stopped by the government and a high-level investigation needs to be launched to stop the fraud,” CNC officials said.

The relief camps cannot be closed till the last affected person is rehabilitated. “We are also of the opinion that every Codava who has lost his everything must be adequately compensated by the government. It is not enough to push them into a colony and forget about them, there are many people who have lost acres of farmland and coffee estates the land revenue records should be retrieved from the government offices and they must be given the same extent of land.”

CNC is also critical of some media houses that collected huge sums of money by floating funds under the garb of helping Kodagu flood victims. Some of them have also received huge foreign funding, but they never reached the affected people, the committee claimed. The government must probe how the media houses collected and disbursed the funds. The CNC estimated that over 1,000 accounts had sprung up for collecting relief funds for flood victims of Kodagu and Kerala.

Victims of the disaster at Muttlu and Surlabinaad villages have decided to stay put in the same land where they lived, and have told CNC that they will not allow the government to take over the land and push them into a colony. Machaiah of Surlabinaad says that the two villages that are now full of rubble that needs to be cleared, and according to him the two villages had over 100 families and the total land holdings was about 600 acres.

Were Rohingya Muslims brought in to Kodagu?

Codavas allege that in the melee and confusion over the rehabilitation, the government agencies have allowed Bangladeshi naxal elements and Rohingya Muslims to be housed in relief camps. The CNC has appealed to the Deputy Commissioner to take a head count and record the antecedents of each of the persons sheltered in relief camps. If it is not done, these naxal elements and Rohingya Muslims will merge into the society as residents of Kodagu district.