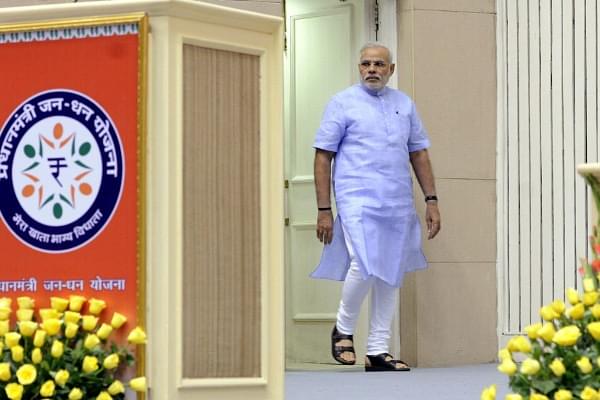 On 26 September 2018, a five-judge Constitution Bench by a majority judgement upheld Aadhaar as Constitutionally valid, upholding, thereby, the bonafide intent of the Narendra Modi government on this issue. True, while the Supreme Court made the 12-digit unique identification number mandatory for filing income tax returns and, more importantly, for obtaining PAN under Section 139AA of the Income Tax Act of 1961, the apex court ruled that Aadhaar was not mandatory for opening bank accounts, getting SIM cards for new mobile numbers, school admissions, social schemes benefiting children, services by private companies, or for Central Board of Secondary Education, National Eligibility cum Entrance Test, University Grants Commission examinations.

That ease of transacting is not limited merely to improving the global ease-of-doing-business rankings, but is rather something that Modinomics firmly believes in, is further vindicated by the Unique Identification Authority of India’s recent decision to allow banks to use Aadhaar eKYC for distribution of subsidies and benefits of government welfare schemes. For other schemes, voluntary offline physical Aadhaar verification will do.

Privacy concerns that were raised back in 2012 by former High Court judge, Justice K S Puttaswamy may have played a role in the striking down of Section 33(2) of the Aadhaar Act, which required disclosure of information pertaining to identity and authentication towards the interest of national security after approval from anyone equivalent to the rank of Joint Secretary to the Government of India. Section 57, too, was struck down, which means biometric data will not have to be shared with third parties for availing any services.

More importantly, Section 47 of the Aadhaar Act, whereby criminal complaints with regards to data breach could only be filed by UIDAI was revoked and now individuals, too, can report any incident of a data breach.

So far, so good. What critics of Aadhaar will not tell you, however, is that the Supreme Court also observed that the government can mine data to ensure resources reached intended beneficiaries. Effectively, by recommending a robust data protection regime that marries individual interests with the legitimate concerns of the state, the apex court was only reiterating what the Narendra Modi-led government had been saying for a long time.

If anything, the political dispensation deserves appreciation for setting in motion the B N Srikrishna committee’s draft of the Personal Data Protection Bill 2018, which aims to strengthen data protection and dwells at length on the matters of consent and breaches against the backdrop of emerging legal and cyber security challenges.

In fact, the Aadhaar issue was never about breaching the privacy of the citizenry, in any case. For instance, Section 32(3) of the Aadhaar Act 2016 specifically prohibits the UIDAI from controlling, collecting, and keeping any information about the purpose of authentication either by itself or through any other entity. Vested interests who have been trashing Aadhaar in the guise of privacy-related concerns need to be reminded that Aadhaar is an identifier, not a digital profiling tool.

Journalists who have thrived on the moving parts of the Congress ecosystem for decades have been running a campaign against Aadhaar, saying linking of bank accounts, shares, mutual funds, and mobile phone numbers with Aadhaar was a privacy breach. Is it? Absolutely not.

Again, for those who fume at being asked to link their mobile numbers with Aadhaar, let it be known that the idea was simply to identify and punish fraudsters, criminals, and terrorists who use fake SIM cards and fictitious identities. Knowledge of the Rohingya and Bangladeshis who had sneaked into India illegally, under the Congress-led United Progressive Alliance, should tell us something about why we need Aadhaar now, more than ever before.

While the mandatory linking of SIM with Aadhaar is not required anymore, is it too much to ask to do our bit for national security and our safety when most of us do not think twice before sharing our personal information on platforms like WhatsApp and Facebook?

The Cambridge Analytica scam involving fraudulent harvesting of personal details of more than 50 million Facebook users worldwide showcases how social networks are prone to vulnerabilities when servers are compromised and malafide intent is at work, thanks to rogue professionals. The Indian National Congress, which has been at the forefront of the smear campaign and continues to spread canards against Aadhaar, is reported to have links with Cambridge Analytica and should, therefore, desist from taking any moral high ground on Aadhaar. Nandan Nilekani, no less, has lauded the Modi government on Aadhaar, and that speaks volumes about why the Congress or its president, Rahul Gandhi, have very little credibility on this matter.

The collective hypocrisy of those who have misgivings about Aadhaar is further exposed through these startling numbers. Of the 1.5 billion-plus active monthly users that WhatsApp has, globally, more than 200 million are from India alone. Again, of the two billion-odd monthly users of Facebook, 250 million, in January 2018, were from India. Those trashing Aadhaar need to know that of the 75 billion messages that were exchanged via WhatsApp globally on 31 December 2017, more than 20 billion were from India.

The limited point is this: Any form of online messaging, identification, social, or cyber-security apparatus may have some chink in its armour, but that cannot be the reason to dismiss it altogether. The unprecedented ransomware attack on 100 countries, which incidentally crippled the United Kingdom's mighty health services industry in May 2017, is a case in point.

In the case of Aadhaar, the tangible benefits far outweigh the perceived negatives, if any. What makes Aadhaar virtually foolproof is the fact that, under Regulation 17(1)(a) of the Aadhaar Act 2016, the biometrics are encrypted and no one, including your mobile phone companies or banks, can store, share, retain, or publish the fingerprint taken at the time of authentication. Doing so is punishable under the law.

To cut to the chase, in a country like India, where less than 5 per cent of the population pays income tax, every rupee saved by the government is akin to a rupee earned. That being the case, Aadhaar is clearly a boon for India's honest tax-paying citizens, as it seeks to cut through the flab and minimise waste and inefficiency. This is endorsed by the fact that thanks to Aadhaar, 3.5 crore-plus fake liquified petroleum gas connections, more than 2.95 crore fake ration cards, 93 lakh-plus fake Mahatma Gandhi National Rural Employment Guarantee Act (MGNREGA) accounts, 4.4 lakh-plus fake ghost accounts under the mid-day meal scheme, more than 1.3 lakh ghost teachers, and more than 13 lakh ghost farmer accounts have been exposed.

The World Bank has recently said India’s Aadhaar, under the aegis of the reformist Narendra Modi-led government, could save up to $11 billion annually. That is more than Rs 80,000 crore, at current exchange rates. The Modi dispensation has already saved in excess of Rs 70,000 crore, all thanks to Aadhaar and the Direct Benefit Transfer scheme. Also, in May 2018, mega-billionaire Bill Gates of Microsoft applauded Aadhaar, saying it was simply a bio-ID verification scheme aimed at inclusiveness, which is “worth emulating” and is not a data surveillance tool. Similar sentiment was echoed by Paul Romer, the Nobel prize winner for Economics in 2018, who called Aadhaar the “most sophisticated system” he had come across.

Last but not the least, Aadhaar has thus far empowered more than 119 crore Indians with a safe, secure, trusted, and verifiable identity, and has laid the aadhaar for a strong, resilient, transparent, and progressive India, which is a welcome change from an India whose aadhaar was earlier built on the feeble pillars of Nehruvian socialism.

“Mera Aadhaar, Meri Pehchaan” is not a fancy slogan. It is our collective identity that seeks to uproot corruption and pilferage by ensuring that the benefits of government sops eventually reach the poorest of the poor. The poor have finally found an empowered voice in Aadhaar.