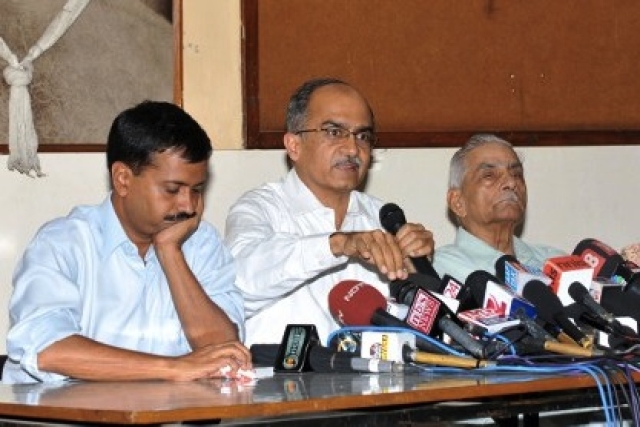 The open feud between Arvind Kejriwal’s faction and volunteers egged on by Yogendra Yadav and Prashant Bhushan is farcical. Some insiders telling the people that the AAP is no less corrupt or communal than other parties after the Delhi election is over makes no sense either

To call the crisis in the Aam Aadmi Party (AAP) a tussle for internal democracy is far from the truth. It is the ganging up of those who feel that time has come to cash in on their contribution and make the best use of the brand. They are the same set of people who were beneficiaries of the largesse by Arvind Kejriwal — they were not elected but handpicked and inducted by the national convener, making it a fait accompli for the national council to ratify the composition of the national executive.

Why has the issue of national convener been raised now when Kejriwal has become the chief minister of Delhi? Will it be democracy if Yogendra Yadav or Prashant Bhushan is made the convener? Will it not be democracy if most members of the national council reject their candidature and re-nominate Kejriwal to stay as convener?

And what is the complaint now that the national executive has rejected both Bhushan and Yadav and ejected them out of the highest decision-making body? The charge is that the Kejriwal faction managed the vote. But democracy is all about managing the numbers in case of a showdown!

Anyone who thought that Kejriwal would lose or his stand would be defeated was clearly unaware of the realities. Not only has he emerged as the tallest leader in the party, but his leading from the front and building the cadre base have also ensured that none would mistrust him. At the most, the Yadav-Bhushan duo allowed vent for many others who were feeling slighted or disagreed with Kejriwal’s strategy on many occasions.

The fledgling party’s leadership is divided. National council members are forming their own WhatsApp and Facebook groups and debating what is right and wrong. While one section advocates that Bhushan and Yadav are not wrong and decisions in the party should be taken in a more democratic way, the other loyal to Kejriwal treats the two as “traitors” with whom there can be no compromise. The ousted leaders are being described as too ambitious without any ground support.

In between the two perspectives is lost the real reason for revolt for the so-called pro-internal democracy, which is to grab power rather than be a part of the gradual movement for consolidation of the political space. They began the charade that Kejriwal had become the chief minister and, hence, he would focus exclusively on Delhi and should then leave the national leadership to someone else.

They conveniently ignored that Kejriwal had appointed Manish Sidodia as the deputy chief minister, giving himself more time to travel all across the country and work for the party’s expansion. That Delhi is to act as a springboard for the national aspiration was forgotten. Raising the ‘one man, one post’ issue in a party that had merely tasted public power reflects more an alibi for dissenters to usurp power than the desire to bring democracy.

In the initial months of the AAP, there were many people who wanted that candidates should be elected through primaries. But this could not happen as the party needed a solid base of committed cadre, which was then absent. Primaries could not be set up, but a semblance of a fair system was evolved to give tickets to aspiring candidates.

And the fact is that Kejriwal has a decisive say in AAP, the same way that Narendra Modi has in the BJP. The reason is simple: People voted for Modi and his promises. In the same way, people across the country, more so in Delhi, have trusted Kejriwal and his promises. It is he who asked for forgiveness for ending his previous tenure prematurely and a renewed mandate.

So, basically these detractors are trying to disturb a leader who has caught the imagination of the people and who has the potential to take the party successfully to other areas as well. These people could become additional factors for both expansion and future victories, but not the main force. By undermining the party’s USP, they tried to create disturbance, which was definitely not in the interest of the party.

Kejriwal and many in the national executive had decided that there was no point in spreading thin across the country and expose the party to ridicule. They want to perform in Delhi and prove that they can govern too, after the stigma of having run away on the previous occasion. In the meantime, the aspiration is to build the party in Punjab, prepare for municipal elections in Delhi and probably target Uttar Pradesh that would witness Assembly polls in 2017, an AAP leader told this columnist.

There is impatience in these rebels who concluded that they must target local elections. Mayank Gandhi is clear that the AAP can do well at the municipal elections in Mumbai. He would rather like to take a shot at becoming the Mayor of Mumbai, the AAP leader said. Yadav was clear that he should have been projected as chief minister of Haryana, whereas the AAP decided not to contest in that state. His long-term desire has been to undertake a countrywide yatra. But he is unaware as to how difficult the task is in terms of logistics. That any failure after undertaking such an exercise would undermine the image of AAP is lost on him.

There is yet another section in the AAP that feels that the party should enter into alliance with other major parties and try to make forays elsewhere. Bhushan and Anand Kumar along with Kamal Mitra Chenoy are reported to be of this view. They had calculated that Kejriwal would not mind aligning with leftist and socialist forces. But the chief has said a clear “no”. He knows that doing so would sound the death knell to the aspirations of the AAP to emerge as the national alternative to Modi.

The Congress, for example, would like the AAP to stay clear of the Punjab Assembly elections or have some tacit understanding with it during the polls. AAP under Kejriwal is in no mood to compromise and is most likely to test political waters there on their own. This may go against the Congress game plan. Does this explain in anyway why there is an urgency in some sections of the party to dethrone Kejriwal as the national convener?

Kejriwal’s reason for not venturing out to other states now is understandable. His logic is simple. One should not make haste; build the innings, pacing it properly. He has learnt from the experience of his previous stint and also the national Lok Sabha elections that politics demands hard work. One learns from the mistakes of the past. In Delhi, the party has been strong enough to tackle the BJP and others. In other states, no homework has been done.

As for example in Delhi, the AAP had targeted first-time voters and worked overtime to enlist them in the voters’ list. Also the marginalised and alienated sections that used to refrain from voting earlier — because they could not get their voters’ cards made or felt they could not make much of a difference — were encouraged by AAP activists to come out and vote. While it might have appeared that there was a wave-like situation in Delhi, a lot of spade work was done to get the desired results.

As against these, some AAP leaders conclude that it would not be able to convert the curiosity and sympathy for the AAP into support and votes in other states. Kejriwal and others of his thinking are certain that his posters would not do the trick. What the AAP lacks now is the image of the party that can deliver. It must acquire this in the coming two years.

Slowly but gradually, Kejriwal has been trying to emerge as an alternative to Modi. His success would depend on his ability to deliver in Delhi. One major success, and the party can plan major expansion in other states, the way Modi had after development stories started coming out of Gujarat.

Where does that leave people like Bhushan, Yadav and Gandhi? While the third character may be spared the axe now unless he opts out, the first two are already out. There is unlikely to be any rapprochement with them. It is not because they have spoken against the ‘supremo’ as Yadav has referred to him. Speaking out on ideological ground is not a sin in the AAP, an insider said. However, the two have worked against the interest of the party — to defeat it in the Assembly elections, he said. You can debate issues but you can’t work against the party’s interest, he added.

Rajesh Garg, former AAP MLA, has released what looks like credible evidence of Kejriwal trying to poach Congress MLAs of the last Vidhan Sabha. Minority cell’s Shahid Azad’s recording suggests the AAP chief is another politician who treats Muslims as nothing more than a captive vote bank. Are these ‘whistle-blowers’ working at the behest of Yadav and Bhushan? If they are truthful people, why did they not release the tapes before the Delhi election to tell the voters (who gave them 67 seats) to exercise their franchise after knowing the ‘truth’ of the Aam Aadmi Party ?