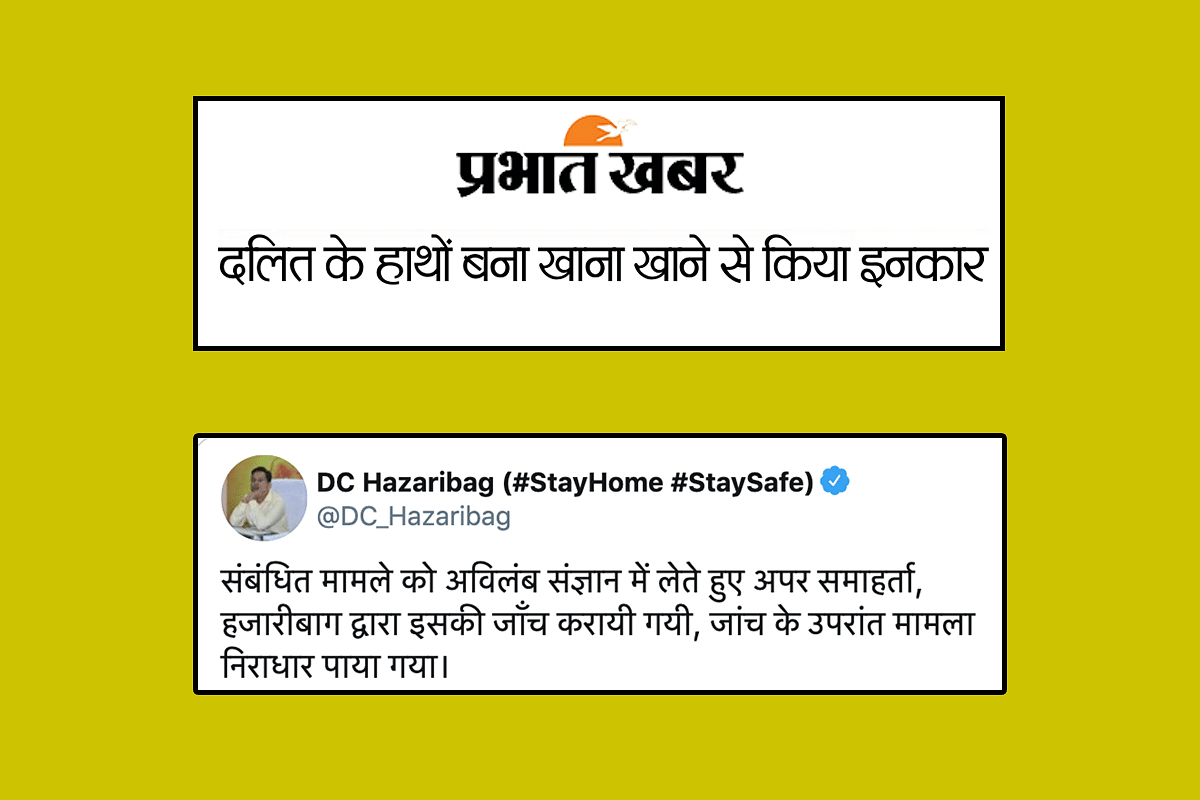 The Prabhat Khabar headline and the deputy commissioner’s tweet.

A group of caste organisations in Jharkhand have questioned the “contradictory statements” made by Hazaribagh deputy commissioner (DC) on alleged caste-discrimination at a quarantine centre in the area, asking for the official report in the matter to be re-examined.

A few days ago, several publications reported that five men from the Brahmin community, housed at a state-run quarantine facility in Banaso Panchayat in Bishnugarh Block of Hazaribagh, had refused to eat the food prepared by a cook belonging to a Scheduled Caste.

The report first appeared in the print edition of Hindi daily Prabhat Khabar on 25 May.

The report carried a quote by Hazaribagh DC Bhuvanesh Pratap Singh saying that dry ration had been arranged for those men.

A Times Now report said, “Following consultation with the local “mukhiya” (village head), the five inmates were given dry ration kits by the district officials and were asked to cook for themselves. The incident was confirmed by Bhuvanesh Pratap Singh, deputy commissioner, Harazibagh. He said that the five inmates should not have raised the issue and should rise above religious and caste affiliations amid these testing times of the pandemic.”

The reports created furore on the social media, with people and organisations demanding action against the discriminating group.

The same evening, DC Singh, through his verified Twitter handle, said that the allegations were found to be “baseless”.

In its edition on 26 May, Prabhat Khabar published a report saying that all was now well at the quarantine centre.

It said that a report submitted by Additional Collector had found the allegations of caste-discrimination to be baseless and motivated by regional politics.

Not everyone is buying the report or DC Singh’s claims.

Jharkhand Janadhikar Mahasabha, a group of caste organisations, has issued a press release asking why DC Singh had admitted to allegations of caste discrimination on the first day.

“If the situation was normal, on what basis were the newspaper given the confirmation of the incident?”, the release says, adding that “the facts do not match, and the matter seems doubtful”.

The Mahasabha has raised two questions:

The organisation has demanded that the case be “re-investigated”.

The organisation has also said in its press note that a video of the cooks at the quarantine centre is making the rounds, in which they are heard saying that the news is concocted and no such incident took place. “In that video, it is also clear that someone is dictating what to say from behind the camera,” the note says.

There has been no response from DC Singh’s official Twitter handle on this so far.

Meanwhile, Brahmin groups in the area are demanding action against Prabhat Khabar and other publications for “publishing false news” to defame the Brahmin community.

Many users have also asked DC Singh why he was not initiating action against the publications that reported the incident if he has found them to be baseless.