Why Create False Revolutionaries? The Other Side Of Kanhaiya Kumar 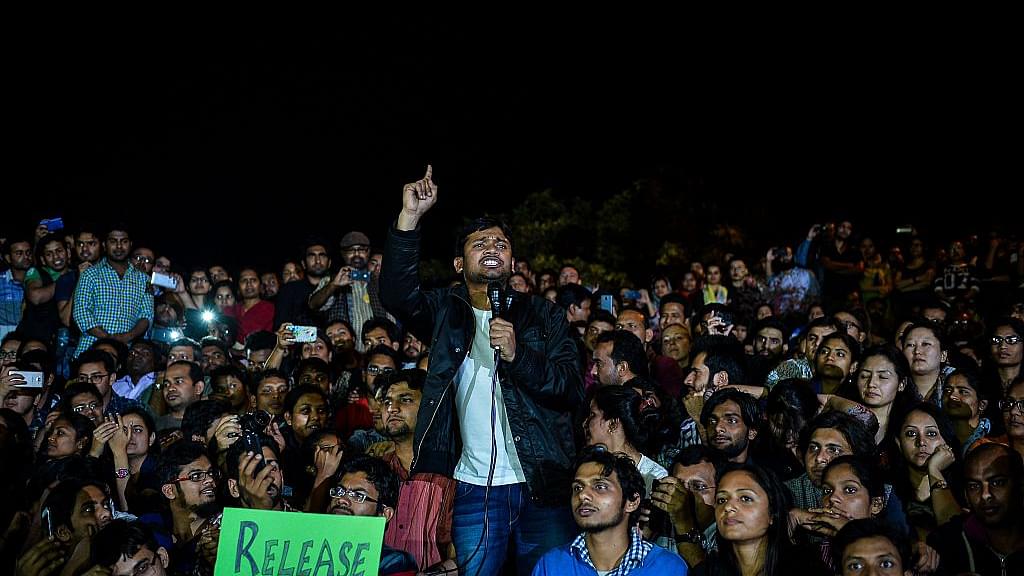 This piece has been published with the permission of Kamlesh Narwana. She studied at the Center for Historical Studies, Jawaharlal Nehru University.

This spring will be known for open letters. Everyone, starting from renowned TV anchors to common students, has been expressing their thoughts, concerns and fears through open letters to Modi, Irani, Ravish Kumar, etc. I am disheartened to see the way in which the JNU case has been twisted and turned to suit vested interests. I am dejected and pained to see how my JNU community have ganged up to create false revolutionaries; JNUites and others are hell-bent on portraying JNUSU president Kanhaiya Kumar as the Bhagat Singh of our century. To all of you I write this letter.

Because I have had an ugly encounter with this newly found Che Guevara, I am eligible to write this letter; and, therefore, I know his real face, which I should definitely expose. My first and last encounter with Kanhaiya was in June last year when he was urinating on a road on the JNU campus. He shouted, threatened me of dire consequences and suggested that I should consult a psychiatrist when I objected to what is, by city standards, an illegal act.

I went on to file a complaint against him with the JNU proctor office in June 2015 as a fellow JNUite. The Chief Proctor and Vice-Chancellor of JNU found his behavior “so unbecoming of a JNU student” and fined him Rs. 3000 after the enquiry. I have strong reasons to ask a few questions to Kanahiya and his followers given the fact that I have first-hand evidence of he of whom everyone is talking about. As a student of JNU for seven years, I have been associated with JNU for the past 11 years and respect its progressiveness. I have appreciated JNU’s culture of debate and dialogue, in what they would like to call “a utopian world.” Here are my questions keeping the disclaimers intact:

• Mr Kanhaiya talks about his fight for the “Dignity of Women” in his post-February 9, 2016 speech which was published in the Economic and Political Weekly. Do you really understand the dignity of women, Mr Kanhaiya? Unzipping your trousers in public and urinating on public property - are these revolutionary tools to uphold women’s dignity? When you were requested by a woman to not urinate in a public space, as you were close enough to use a toilet, with a friend with a car to drive you there, you shouted at her, threatened her to shut up, called her names, insulted her and asked her to go to a mental hospital to treat herself. It shows that the act of public urination is completely normal to you. Is this the way to uphold “women’s dignity”?

• You have claimed public urination and sutta pina (public smoking) as your rights through your behaviour. Are these your notions of “rights to freedom”? It underlines the shallowness of your political and revolutionary ideology. Might you update your definition of revolution and freedom? Freedom is not about urinating on roads and smoking in no smoking zones!

• You have said, in your speech, that you have come from a very poor family where your mother’s monthly salary is 3000 rupees per month. Mr. Revolutionary! Do you really value her struggle? You had spent 3000 rupees as a fine for “public urination” and “harassing and threatening a girl” on the streets! So, stop making a hue and cry about your family’s poverty when you do not even value their struggle. I belong to a poor family too. My mother worked as an agriculture labourer and raised my four siblings and I. I know what that does for “dignity of women.” We women, struggle at every step to uphold our dignity. When I see a man urinating in a public place, my fellow females and I feel unsafe (forget about hygiene). I have seen how women are being molested on the pretext of public urination. I tried to explain to your fragile, male ego when it was hurt the truth of the matter.

• I am not justifying the government’s move; however, “criticizing government” and “portraying Kanhaiya as a revolutionary like Bhagat Singh” are two different cases. I am very disappointed at the politics of it all. The VC and Chief Proctor are right. He is so unlike any JNU student; he is a hypocrite and an opportunist politician. Newspapers and news channels have drawn Kanhaiya’s family background and his school pictures with Comrade Bardhan to show his commitment to communist ideology. Does he understand what communist Ideology says about gender equality? I come from a communist family. My brother, Late Com. Rajender Ghira, was an active member of the CPM in Haryana. I was associated with the student movement at JNU. I have witnessed how the JNU student movement is committed to the issue of “gender justice”. I have closely observed how CPM members like Comrade Jagmati Sangwan, Comrade Phool Singh, Master Sher Singh, Styapal Siwach are fighting for gender justice in patriarchal Haryana.

And then I faced the wrath of a public urinating male chauvinist like you in JNU who claims himself a revolutionary! I could not find any trace of communist ideology in your behavior.

I am shocked to see how a misogynist like Kanhaiya is being hailed a revolutionary.

People (JNUites and outside JNU)!,

Do criticize the government; do criticize his arrest, but why create fake sympathies by discussing his family background and by sharing his childhood pictures with Comrade Bardhan? What is the urgency of creating false revolutionaries? Please consider the kind of message you are giving! Keep your rationality intact.