Why Irom Sharmila Got Just 90 Votes 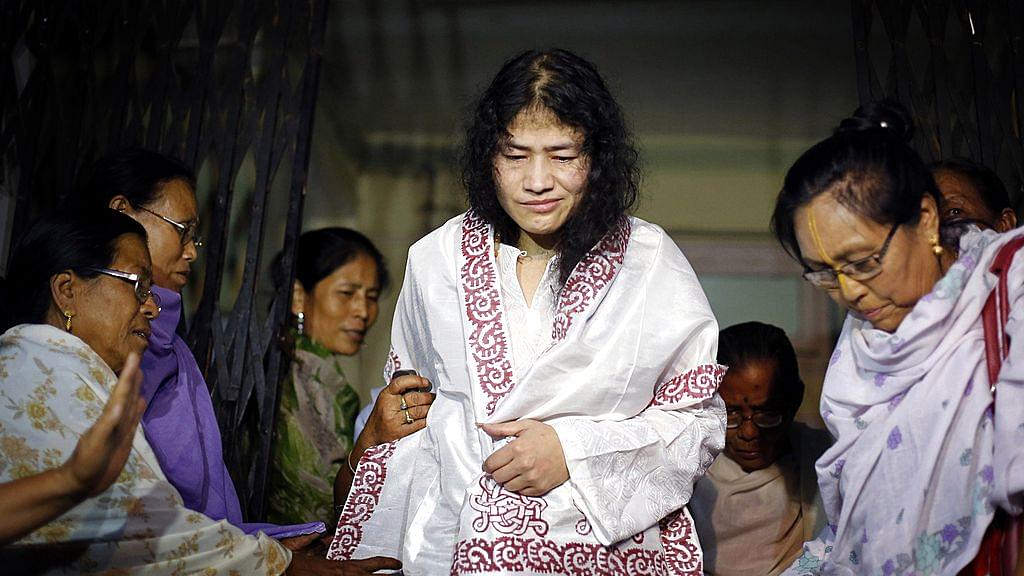 Irom Sharmila with her supporters. (STRDEL/AFP/GettyImages)

Irom Chanu Sharmila, the symbol of sacrifice in not just Manipur but the whole of the north-east, got just 90 votes in the elections to the Manipur assembly.

It was a tough fight; she was up against the chief minister. But, even then, just 90 votes for someone who gave 16 years of her life to a cause and who was celebrated as an icon till recently? Less than the number of votes cast under NOTA (none of the above) – 143?

Now look at what happened a few hundred kilometres away in Uttar Pradesh. Gayatri Prajapati, the minister in the former Samajwadi Party government on the run from arrest in rape charges, lost by merely 5,065 votes. And the well-known bahubali Raja Bhaiya (Raghuraj Pratap Singh) won with a margin of 1.03 lakh votes. Even as votes were being counted, a murder case was registered against him.

What is it about voters that they decisively reject candidates whose integrity is unimpeachable but repeatedly elect those with dubious reputations and records? This is Raja Bhaiya’s sixth consecutive win. Another bahubali Mukhtar Ansari had his fifth consecutive win in the election.

No, this is not about Manipur versus Uttar Pradesh. In Manipur, out of 265 candidates, nine had criminal cases against them; four of them faced serious charges. Of these four, two won in their respective constituencies and two came second in theirs.

Across states, even as we moan about growing criminalisation of politics and the scarcity of honest people in the political sphere, those with criminal records have absolutely no problem getting elected. And no, they are not forcibly taking over booths and rigging elections. In his recently-released extremely engrossing book, When Crime Pays: Money and Muscle in Indian Politics, Milan Vaishnav points out that the phenomenon of criminals in the fray is not just confined to the cow-belt but is far more widespread than is popularly perceived.

In a 2005 blog post on a different issue, I had made this point: “The problem is that all of us are looking at the crisis in Indian politics purely as a supply side issue – that there are not enough good people in public life whom those desiring a better India and a cleaner politics can vote for. But there is a demand side issue as well – is there sufficient demand for such people?”

The answer then was a tentative no; I had argued that public dissatisfaction had not yet reached a critical mass. Twelve years on, I wonder if that critical mass will ever be reached.

Vaishnav raises this point in the five questions he poses about this phenomenon. These are: Why do criminals get into the electoral sphere? Why do parties give them tickets? Why do voters vote for them? What can be done to limit their entrenched position? What are the implications of the presence of criminal politicians for democracy and accountability?

The answer to the first two questions lie in the third – why do people vote for criminals? It is not as if they do not know that they are criminals. Ahead of every election, ADR puts out details of candidates’ background based on the affidavits filed with the Election Commission. While this is a commendable initiative, it is really more of academic interest for the world outside a particular constituency and gives a macro picture about the number of criminal candidates in the fray (and enabling a lot of breast-beating among the commentariat). The turning of the spotlight on this phenomenon does not make an iota of difference.

Voters in areas where the mafia dons/bahubalis hold sway don’t need affidavits to learn about the dubious background of their candidates. They will even know things that are not on the affidavit. And yet they vote for them; even if they stand as independents when denied a party ticket. Parties need them more than they need parties.

Even the party that promised an alternative politics succumbed to this allure, as Vaishnav calls it. In the Punjab elections, 11 per cent of the Aam Aadmi Party’s candidates had criminal records, the ADR report shows. Of these, nine faced serious charges. The percentages are the same as that of the Shiromani Akali Dal – the conventional party which AAP was challenging.

Vaishnav says one of the reasons parties flock to criminals is the fact that they are `self-financing’ and can also bring in money to party coffers. “When it comes to campaign cash, candidates willing to break the law have a distinct advantage...” But this is not entirely true. Psephologist Yogendra Yadav made a valid point at the book launch function in Delhi last month – that parties can get well-endowed self-financing candidates without criminal backgrounds, if they want.

If they are still not doing so, it is clearly because of the winnability factor. And this is where the expectations that voters have from their elected representatives becomes important.

People are not bothered about ideology beyond a point; they are more bothered about how they are to go about their daily lives with minimum hassles. People want their elected representative – from the municipal corporator to the member of legislative assembly to the members of Parliament – to get their drains fixed, water supply ensured, roads paved, get their illegal constructions and encroachments regularised. In Delhi, Jagmohan and Sheila Dikshit were middle class heroes when they went on slum clearance drives; both became villains when they went after illegal constructions in middle class colonies.

Vaishnav says: “The allure of politicians with criminal reputations is, thus, a by-product of the institutional failings of Indian democracy to meet the needs of its citizenry in between elections.” His book engages with the issue of mitigating this phenomenon – speeding up the justice delivery process, addressing the governance deficit. He also talks about ways to clean up political finance, in order to reduce parties’ incentive to field such candidates.

Addressing the governance deficit will be the key, more than reforming campaign finance. The allure for criminal politicians among voters is not about their background. Indian voters are remarkably practical – their only expectation of their elected representatives is to get things done; whether and how he buys his way into an election doesn’t matter.

If the representative is an honest, incorruptible person, that’s icing on the cake; if the representative is corrupt and lines his pockets while helping them out or a criminal who may be involved in murder or rape, well, that’s too bad – par hamara kaam to kar dega na (but he’ll get our work done, won’t he)? They are just not interested in an honest, incorruptible person who is not `effective’.

Several do-gooder parties have come up across the country since the mid-2000s. Candidates fielded by them – honest, upright people promising good governance – have mostly lost their deposits.

That is why Irom Sharmila gets just 90 votes.