Why Is Stalin Accepting The Sacred Spear Of Murugan In Public Appearances While Kanimozhi Is Rejecting It? 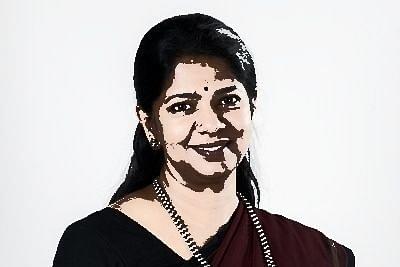 The Dravida Munnetra Kazahagam or the DMK has been reaching out to the Hindus in Tamil Nadu, of late. This is more because of the apparent consolidation of the Hindus than out of any genuine change of heart.

The recent obscene attack on Murugan, the popular Vedic Deity of Tamil Nadu, by a Dravidianist Youtube group created an unprecedented mobilisation in the state among the Hindus irrespective of the party affiliation.

In this collective democratic backlash of civil protest loaded with Hindu symbolism, the DMK was largely perceived as being hand-in-glove with, or sympathetic to, the Dravidianist Youtubers.

Usually, the Tamil Nadu BJP has been perceived as incapable of harvesting the political dividends from such Hindu sentiments in the state.

However, of late, that perception has changed considerably.

Tamil Nadu BJP leader Murugan undertook a ‘Vel Yatra’ or the Yatra of the Sacred Spear – the spear being the symbol of Murugan (Skanda).

The enthusiastic response with galvanized supporters thronging the streets despite the pandemic, all through the state, made political observers sit up and look at the BJP in Tamil Nadu.

In addition, youth leaders like Annamalai on the ground, Vanathi Srinivasan in the field of women and social welfare, S G Surya and Madhan in the media and social media, and Ma.Venkatesan in the intellectual field have drastically changed the way BJP has been perceived so far in Tamil Nadu. There is a silent resurgence.

It seems the DMK strategists have realised that and have asked the party’s dynasty supremos to yield to the changing ground reality. Stalin has been on a spree of receiving the Vel in the DMK public functions.

Even alliance partner VCK, known for its obscene verbal abuses on Hinduism and women, swallowed its pride and anti-Hindu rhetoric and did a Vel acceptance drama in its meeting.

Yet, there is one leader in DMK who does not hide her aversion for any Hindu symbol. Kanimozhi, the stepsister of DMK dynasty supremo Stalin.

The aversion surfaced in the face and gestures of Kanimozhi when she was in Madurai to supervise works of installing the statue of her father, the previous DMK supremo Karunanidhi.

Some DMK functionaries tried to give her a Vel.

The photo of her rejecting the Vel with a visible gesture and expression of annoyance and repulsion said it all. Similarly, when she went to meet terracotta artisans as part of DMK’s election propaganda she refused to receive an idol of Ganesha given to her by one woman terracotta artisan.

There are many reasons why Kanimozhi might be doing this.

Her stepbrother Stalin had captured the DMK’s supremo post and had ensured that his own dynastic lineage would take over in the future by bringing in his son Udayanidhi. Udayanidhi got into a controversy in Dravidianist circles when he made a tweet featuring a clay idol of Ganesha on Ganesha Chaturthi.

Kanimozhi may have been upset with the family heirs of the first wife of Karunanidhi taking over DMK with her own branch being relegated to second fiddle.

This may be her way of stating that though they have captured the power and party, she may be representing the ideological purity of the party – positioning herself as a kind of Dravidianist Wahhabi.

Kanimozhi is close to Catholic priest Jagat Kaspar, an extremely fundamentalist strategist and a power-center who runs several projects to appropriate Tamil culture and digest it into Christianity.

Kanimozhi is known for employing intemperate language denigrating Hindu Gods in the name of her feminist rhetoric verses which she was able to peddle as poetry, mostly thanks to the influence of her father, whose name she flaunts despite her feminist posturing.

This dichotomy in Dravidian politics has always been there.

C.N.Annadurai, the founder of the DMK was more well read and was the intellectual ideologue of the movement, unlike EVR who was only a rabble rousing demagogue.

Soon Anna started moving away from EVR. At one point he even decidedly moved from EVR’s atheism and made a verse from Thirumanthiram ‘One is all humanity and One is the God’ the axiomatic basis of DMK.

He boasted of Brahmins joining the DMK. This was the same person who in the heyday of Dravidian movement wrote an obscene critique of the Ramayana but later likened his own attitude to power as similar to that of Janaka no less. He also supported the Vivekananda Rock Memorial even as the then ruling Congress opposed it.

We do not know how the Glasnost he brought would have changed the Dravidian movement. His life was cut short by disease.

Karunanidhi, through his own manipulations took over the party.

He was known for ornamental speech and ruthless power politics.

He sabotaged his rivals and brought all under control.

One can say that the DMK under Karunanidhi followed the uncouth pseudo-rational racism of EVR with Hindu-hatred at its core while AIADMK under MGR moved more in the direction of the last phase of C.N.Anna.

It is possible that a similar scenario may be working out again inside the DMK between the two family branches of late Mu.Karunanidhi – Stalin moving more the Anna way and Kanimozhi the EVR way.

While in the case of MGR the move was genuine, here the moves may be driven by electoral manipulation and internal power struggle.

In future, when Tamil Nadu becomes free of Dravidian fascism it may be possible even to look into the psychological reasons for her hatred.