Why #SayNoToWar Need Not Be Taken Seriously: A Kautilyan Perspective 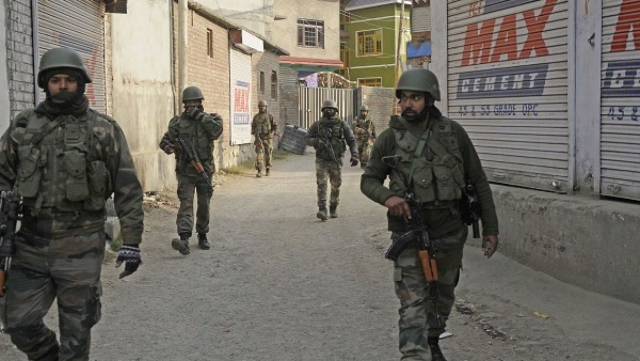 Army soldiers on the outskirts of Srinagar. (Waseem Andrabi/Hindustan Times via GettyImages)

This is how the last few high pressure days can be summed up. India conducted deep air strikes inside Pakistan to take out terrorist training camps. Pakistan retaliated by sending its jets to reportedly attack India’s military installations. They were intercepted and an F-16 was brought down by Wing Commander Abhinandan Varthaman who was flying an IAF Mig 21 Bison. It was hit by ground fire and he evacuated on Pakistan-occupied Kashmir territory where he was first beaten by locals and then taken into Pakistani custody.

This is the background on which a rising tide of liberal pacifist opinion has evolved. There is a high-pitched noise that India should “say no to war” and enter into talks with the “statesman Prime Minister” Imran Khan. The clamour is to dial everything down and then go back to status quo when Pakistan hits us as and when it pleases.

Here are some familiar arguments.

- War leads to violence and unnecessary deaths on both sides. There will be escalation and nuclear annihilation etc.

Let us consider the prospect of war and peace from the Kautilyan perspective, since some semblance of sanity must be restored to a liberal narrative which is spiralling out of control.

Kautilya, one of the earliest to set down a comprehensive theory of state and society, economics and politics in his Arthashastra, has a saptanga conception of the state. It consists of “swami”, the king; “amatya”, the ministers; “janapada”, the land and people; “Durga”, the fortress; “kosha”, the treasury ; “danda”, the army and “mitra”, the allies. In the context of the present day, this will mean a democratically elected government, the administration, the land and people, the defensive fortifications, the treasury, the army and the allies.

In the conception of the state, all these different constituent parts have their own role to play in the continued existence and success of the state. The idea is to acquire, maintain and enhance the political power of the state. The ‘king’, which translates to the elected government for us, has the moral obligation to protect the land and its people and ensure their welfare and prosperity.

This protection is against both internal and external foes. The army, in particular, is meant for protection from external aggression whether through offence or defence.

The objectives of the king, the “vijigishu”, or the state of Bharat, in our context, are to secure an increase in his own power at the cost of his enemies. The six methods of dealing with other constituent states… are sandhi (peace), vigraha (hostility), asana (remaining quiet), yana (military expedition), sanshraya (seeking shelter) and dvaidhibhava (a combination of sandhi and vigraha).

Without going into details, sandhi is to be used if the state is weaker than the enemy, vigraha if it is stronger, yana if it is much stronger. Dvaidhibhava is recommended when, with the help of another source, one’s enemy can be fought, so sandhi with one state runs congruent to vigraha with another.

India is strong enough to use vigraha and yana and should be diplomatically clever enough to use dvaidhibhava. But what India has been doing since quite sometime is lurching ineffectively from sandhi to asana and sometimes to rare attempts at vigraha. This oscillation has left it at a disadvantage.

India has absolutely no reason to pursue sandhi or in lay terms, peace. The rogue, terrorist state of Pakistan does not have the long-term goal of peaceful co-existence. Its aim is to break up and ensure the destruction of Bharat through whatever means it has. Carrying on a low cost, undeclared war through its Islamic proxies and the radicalisation of Kashmir has suited it well through the decades. It has one policy when it comes to India and that is the policy of death by a thousand cuts.

In the Doval Doctrine, the Indian state has now shifted to offensive defence which can be placed in the vigraha bracket. The debate is whether or not to shift to yana or war.

At this juncture, the liberal cabal is trying to whip up public opinion in favour of sandhi, dredging up arguments such as loss of life, scorn at armchair warriors who will not pick up arms themselves, concern for army families, citing India as a peaceful nation etc.

It may be noted that the army has the onus of protecting the janapada, the land and people. The state’s duty is to use the brute power of the army, and the counsel of the administration to protect the people and ensure their prosperity and welfare. The armchair warrior argument therefore does not hold. People are not supposed to pick up arms to defend themselves and the nation. That is the army’s domain.

Sandhi with a weaker enemy who is carrying out a proxy war and will not stop the violence under any situation is a meaningless pursuit. In fact, it is the state’s moral duty and obligation to protect its people through either vigraha or yana. Loss of life will continue even if India carries out peace talks with Pakistan, as has been demonstrated through the decades.

Now, let’s move on to another concept, that of the fifth column. This originated in the Spanish Civil War of the 1930s but found its fame in the Second World War. A fifth column is any group of people that undermines a larger group such as a nation through overt or clandestine activities. There is a method of “bheda” mentioned in the Arthashastra, which is to spread, confusion, dissension and misinformation in the enemy camp so that the will to fight is sapped and the enemy is confused.

Parts of India’s media and entertainment industry are this Pakistani Kautilyan tool against us, a well-oiled fifth column formation seen at its best during the IC 814 hijack. We are still paying the price for it. There is a need to exercise extreme caution against these people and their followers. It is a fine irony, that instead of us using Kautilyan principles, our enemy is using his tactics against us!

Since status quo suits Pakistan, these fifth columnists, either with vested interests or through naivety, sentimentality or hatred for the current political dispensation carry forward the objective of confusing and dividing the Indian people. Talks for a humanitarian ‘rescue’ of Wing Commander Abhinandan, who is actually a Prisoner of War under the Geneva Conventions, through talks with Pakistan are being used to drive emotion and sentiment to sway the Indian state from its path of offensive defence or vigraha. Calls to end the bloodshed suit the enemy and do not push forward the objectives of the Indian state. In any case reports state that in the face of India’s uncompromising stance, he is being released today.

This is not the time to invoke Gandhi but Kautilya. And this is the time to have faith in our government and army; swami, amatya and danda.