Why #TalkToAMuslim Is Little More Than Another Victimhood Narrative 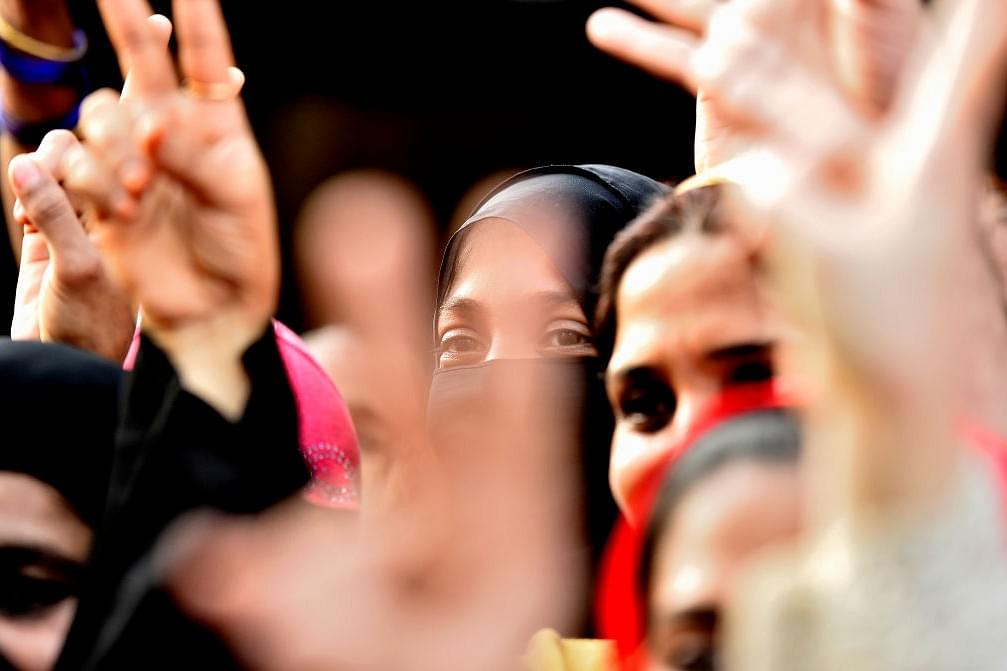 Members of the Muslim community at a rally in Mumbai. (Anshuman Poyrekar/Hindustan Times via Getty Images)

Even given the best of intentions, the hashtag #TalkToAMuslim is likely to end up as another victimhood narrative and isolate Muslims further from the national mainstream. Not only is the term condescending, it also presumes that no conversations are happening across the religious divide.

One doesn’t have to be a Muslim to empathise with their fears and feelings when they are bombarded day in and day out with media images of mob lynchings, not to speak of daily political efforts to paint the Bharatiya Janata Party (BJP) and the Rashtriya Swayamsevak Sangh (RSS) as anti-Muslim, but the question one needs to ask is this: is there any community in India that feels any more secure than what Muslims may be feeling? Is there anything more bogus than the fake narrative that the average Muslim’s isolation can be dated to 26 May 2014, and that India was a land of milk and honey for the community before that? Words like Islamophobia are now being bandied about like god’s truth, while the reality of growing Hinduphobia is dismissed out-of-hand (after all, Hindus are 80 per cent of the population).

When terms like Saffron Terror, Hindu Terror, Hindu Pakistan and Hindu Taliban are used by the main opposition party and even erudite MPs, is this not a sign of Hinduphobia? Substitute Muslim for Hindu in the above terms and see how communalism will be called out.

The simple fact is that millions of Indians of every kind talk to Muslims daily, and the sense of isolation from the mainstream is less a BJP plot to ostracise them than an effort by the “secular” media to harvest their votes by trying to push Muslims back into their fearful selves. While no one should be thrusting his ideas of nationalism or yoga down Muslim throats, when “secularists” shout from the rooftops that singing Vande Mataram or doing yoga is unIslamic, who is distancing whom from the mainstream? When Tabligh activists want to remove all syncretic elements from Indian Islam, and Keralite Muslims are being told that Onam is not their kind of festival, who is isolating whom from the rest of India? Even the most rabid Hindu is not asking Muslims to be more Islamic.

Without demonising Hindus, it seems, the “secular” parties can’t force Muslims back into the post-partition box and demand protection payments from them in the form of block votes. This is the key to the narrative being peddled, and the hashtag #TalkToAMuslim unfortunately panders to the same psychology.

In any other country, the idea that 180 million people constitute a “minority”, and that they need mollycoddling, would be laughed out of court. But in India, this huge number is supposed to be quaking in fear because some criminal elements are pulling some Muslims out of their homes in isolated cases and beating them to pulp. Incidents like the Dadri murder over beef or a minister garlanding some convicts out on bail would, in the pre-hyper-media age, have been dismissed as some local aberration, but today they are part of national discourse. To be sure, this sensitisation of the nation to horrible crimes like mob lynching and the underlying bigotry is good if it forces us to seek real remedies like depoliticising the police force and professionalising them, but that does not work for the political narrative being built up today. It has to be a tale of Hindu aggression and Muslim victimhood.

If Muslims are being isolated from the national discourse, they need to talk to their alleged protectors about this, and also to forces within their community.

If the conversations within the community are all about painting the BJP and the Sangh in the worst possible light, and not about modernising the community and freeing themselves from the grip of retrograde elements, it is easy to conclude that the BJP is their enemy because it supports (possibly for narrow reasons) a ban on triple talaq, and is against nikha halala, polygamy and Sharia courts.

If anything, Muslims need to also talk to the BJP and the Sangh, for it cannot be assumed that the BJP does not want their votes. If the community chooses to oppose whatever the BJP stands for, would it be any surprise if the party stops seeking their votes, and focus on the rest? Why isn’t there a hashtag #TalkToTheBJP/RSS trending here? Do Muslims really believe that the Sangh is planning to annihilate 180 million members of the community, when both demographic trends and objective reality are heading in the other direction?

Should’t Muslims also #TalkToAPandit when those ethnically cleansed from Kashmir Valley have no friends? Shouldn’t Muslims not #TalkToHinduRefugees from Pakistan and Bangladesh to understand how isolated and uncared for they feel in supposedly “Hindu India”, where all the media hype has been about providing Rohingyas refugee status and set up shop anywhere in India?

In our neighbourhood, it is a demonstrated fact that wherever Muslims have been in a majority, it is the non-Muslim (mostly Hindu) who has been persecuted, raped, dhimmified and driven out. So how does the average Muslim come to believe that there is no narrative of real Hindu concerns and the only valid one is theirs?

When Hindus face two aggressive and predatory, proselytising religions in the only country where they form a majority, why is it so hard to understand their fears about the future? Why is the average Hindu’s worry about the growing dominance of Islam and Christianity in Kerala, or the adverse demographic changes in Assam, Jammu and many districts of West Bengal, Uttar Pradesh and Bihar, not considered valid? Shouldn’t Muslims be #TalkingToHindus about these fears?

Muslims know that their religion is iconoclastic, and that there is a huge probability that Islamic rulers in the past may have demolished more temples and desecrated more idols than they would like to acknowledge. But shouldn’t they be suspicious when “secular” parties believe that this truth should be kept from Muslims, when they know this could be true? Today’s Muslims are in no way responsible for what happened in the past, but can any reconciliation between Hindus and Muslims ever be possible without acknowledging the truth? Why isn’t there a hashtag #LetsTalkAboutOurPast trending , so as to prompt a genuine understanding of the past and build bridges between the two communities?

#TalkToAMuslim is a fake narrative of Muslim victimhood. The only real way forward for India is the hashtag #LetsTalkTruth&Reconciliation. India needs open and honest conversations among all its communities, not fake ones like the one being peddled.