Why The Amarnath Yatra Attack Is Nothing To Be Surprised About 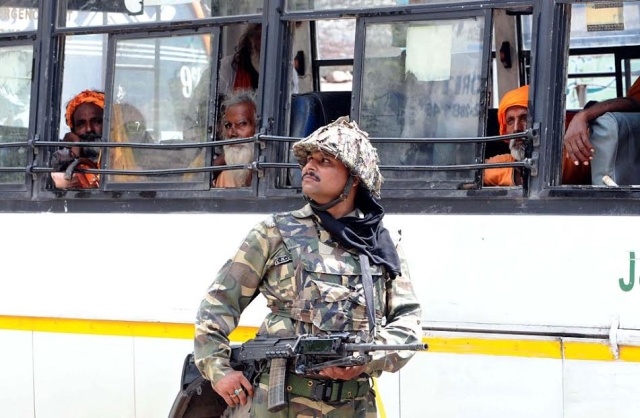 ‘Militants have crossed the red line by attacking the Amarnath pilgrims’ headlines screamed, and the verbal condemnation of the massacre of Hindu pilgrims by different factions of Kashmir’s separatist outfits was celebrated by politicians as a symbol of that elusive entity, Kashmiriyat.

From the very beginning of the Kashmir insurgency, sacred places have been targeted by terrorists. The Hindu temples that withstood the attacks and agonies throughout history and remained standing were subjected to systematic attacks by Islamists. A report dated 18 February 1993 in a Times of India Group newspaper cited information from the Home Ministry to reveal that 36 temples were attacked in 1986, eight in 1988, 12 in 1989, eight in 1990, five in 1991.

In 2002, Hindu pilgrims returning from Ayodhya were killed in Godhra.

On 30 March 2002, a Fiyadeen attack was carried out at Jammu’s Raghunath Temple, where 11 Hindus were killed.

In September 2002, two terrorists stormed Gujarat’s Swaminarayan Akshardham Temple complex and killed 30, including children, who were captured and executed.

In 2005, the makeshift Ram temple in Ayodhya was attacked by Islamist terrorists. The terrorists killed one innocent person before being eliminated.

In 2006, bomb blasts ripped apart Varanasi – one of the most sacred of pilgrim centres for the Hindus. It killed 26 people and left 101 injured. A Lashkar clone outfit ‘Lashkar-e Qahab’ claimed responsibility for the heinous crime. In 2010, another bomb blast hit Varanasi, with the Indian Mujahedeen (IM) claiming responsibility this time. Of the two killed in this attack, one was a child.

All these attacks show that targeting sacred sites of the Hindus have always been part of the Jihadist strategy. These attacks have involved elaborate planning, and the killings inside the sacred precincts have always had an element of added cruelty. An India Today report of the 2002 Akshardham attack based on eye-witness accounts has this to say:

“A priest recalled a mother begging for the lives of her children-later identified as Priya and Bhailu Chauhan, aged three and four. The woman, Sumitra, had been running with her little boy and girl when she was felled by a bullet in the leg. The killer nodded to her pleas, then turned his gun towards the children and, to the horror of the mother, mowed them down.”

So the attack on Hindu sacred places, whether it is Varanasi or Amarnath or Akshardham, is not crossing the red line at all. Kashmir terrorists are not a separate regional identity. They are part of the larger Islamist terror organism. Sonia Gandhi, of all politicians, perhaps, got it better than the politicians who went tweeting with the ‘Kashmiriyat’ bamboozlement, when she said that ‘the attack on the devotees of Siva was a crime against humanity’. The attacks were identical to the Nazi attacks on Jewish synagogues. They are hate-filled and systematic.

The world remained silent and remains silent about the Marxist-Han elimination of the Tibetan culture, which is accompanied by great human suffering in the occupied territories of Tibet. The world remains silent on the slow but steady and humiliating killings of Hindus, Sikhs and Buddhist tribes in the ongoing ethnic cleansing Pakistan and Bangladesh. When Taliban made Hindus wear badges in public, the media was silent. Except for a handful of Jewish organisations, almost nobody cared.

And it is not just the non-state Islamist terror groups that attacks the Hindu holy places. A case in point is the Ramna Kali Mandir in Dhaka. One of the holiest places for the worshippers of goddess Kali, the temple was targeted by the Pakistani occupation army in 1971.

The report on the destruction prepared by eminent Bangladeshi historian Prof Muntashir Mamun along with Saharia Kabir, Basudeb Dhar and Dwipen Chatterjee, gives a graphic account of the destruction:

When evening curfew was in effect, Pakistani forces, along with their supporters, encircles the Ramna Kali Temple and Ma Anandamoyee Ashram at 2:00 a.m. in the night of March 27th 1971. The whole Ramna area was well lit by the searchlights of Pakistani forces. Firing of the cannons started in the meantime. ...As a result the deity and the back portion of the Temple wall were completely blown away. Subsequently, the Temple and the Ashram were destroyed. ... People sleeping inside the campus started running around in fear for their lives when the Pakistani army attacked. Everybody started shouting the slogan ‘Pakistan Jindabad’ (Long live Pakistan) in panic, the women broke the bangles made of conch shell and worn on forearms, and wiped out the vermilion dot. Some went into hiding at different corners of the Temple and the Ashram. Pakistani soldiers searched them out at the point of bayonet and made them to stand in line in front of the Temple. Men were made to stand in one line and the women with children stood in another line. In front of all the people, the Pakistani soldiers forced Paramananda Giri, the temple priest to recite ‘Kalema’ and immediately afterwards killed him by piercing the bayonet into his stomach and shooting. Subsequently many people were forced to recite ‘Kalema’ and then killed in the same way. Pakistani soldiers would explode in devilish laughter and say that this was the consequence for voting on ‘boat’ marked ballot. The remaining men folks were gunned down in hail of bullets. ...The women were beaten by guns when they started screaming after seeing this horrible carnage. Many of them turned senseless. Pakistanis heaped the dead bodies together and set them on fire with gasoline. Those who were wounded also perished in fire. Witnesses mentioned that some women and children were burned to death in the fire. Pakistani soldiers forced them to shout ‘Jai Bangla’ when they were shot in the mouth and killed. …

However, the climax of the destruction came when Bangladesh was liberated. The destroyed temple for the goddess worshiping pagan Hindus, was neither rebuilt, nor turned into a monument in the memory of the massacred Hindus. Supposedly secular, Sheikh Mujibur Rahman confiscated the land of the temple from the Hindu board under the Enemy Property Act and handed it over to the Department of Public Works. The remains which survived the Pakistani carnage were bulldozed. In 1972, after finishing what the Pakistanis did, the Bangladesh government handed the land over to the Dhaka Club, an elite entertainment body.

Note that there have been no events to mark the anniversaries of the massacre. There were no pictorial exhibitions of the SAHMAT variety. The breast-beating brigade of the so-called Palestinian cause did not even light a lamp in public in memory of the temple. Even Hindutvaites have been desensitised to such brutalities. If a Hindu place of worship is destroyed, at best, it is to be forgotten as the effect of the onward march of history about which Hindus should remain silent, or at worst, a provocation against which Hindus should remain silent.

If you think these are all isolated events with each having its own local reasons, then consider this. The report about children being forced to shout ‘Jai Bangla’ even as they were shot in the mouth happened in March 1971. The Akshardham massacre is separated from the Ramna Kali massacre by 31 years and 2,340 kilometres. Now read this eyewitness account of the 2002 Akshardham massacre:

After the initial indiscriminate firing, the two militants adopted a “pick and choose” kind of approach to shoot and kill people, said another witness Sulekha Bhubor. “They did not leave even small kids. I saw with my own eyes one terrorist gunning down a five-six year old boy,” she said.”One stopped a crying kid who had lost contact with his companions and made him say ‘Vande Mataram’. The poor kid said that and immediately was shot dead ruthlessly,

It is not only the Islamist terror organism that is aiming at the Hindu sacred places and pilgrimages. Recently, the Maoist Chinese government humiliated the Hindus and Buddhists by stopping the Kailash Yatra. None protested this humiliation of their religion and violation of their sacred geography. Not a single international human rights body, neither UN nor UNESCO demanded that the religion and sacred geography of Hindus and Buddhists should be kept above the skirmishes between nation states. Even the Indian government did not protest this gross violation in decibels the issue deserves.

Both Auschwitz and Ramna Kali did not happen overnight. Centuries of hate propaganda and manufacturing of stereotypes have nurtured it. ‘Cow worshipping idolatrous caste-ridden Hindus’, ‘money-lending parasitical scheming Jews’ – these images have actively gone into the making the genocide of two communities. Today, negative stereotyping of the Jews cannot be done by mainstream academics and media – not that there are elements there who do not want to do that. But negative stereotyping of Hindus, Hinduism and the Indian society can be done by the mainstream academics and media, who refuse to see Hindus except in a disparaging way and only through the colonial-Marxist glasses. Unless we Hindus, as a nation and society, address this issue and constantly fight against this hate campaign, we cannot stop completely these attacks on our pilgrims and culture.