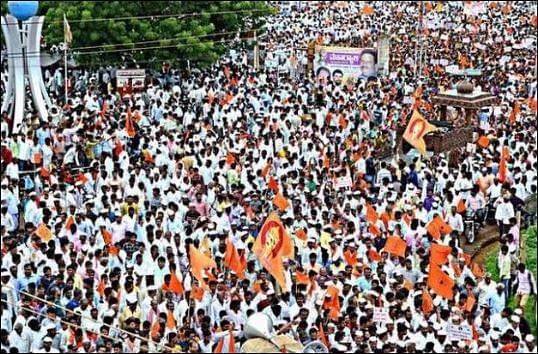 Emotional issues ... a Lingayat agitation on the streets of Bidar

A Supreme Court bench headed by Chief Justice of India Dipak Misra correctly rejected a petition from Rashtriya Hindu Sena chief Pramod Muthalik claiming that the Congress party manifesto for Karnataka appeals to minority voters. This would be a violation of the secular spirit of the constitution and also article 123(3) of the Representation of the People Act (RPA), 1951, which bars appeals based on religion, caste, race, community or language.

While the petitioner’s counsel claimed that the Congress manifesto was violative of what the court held in Abhiram Singh Vs CD Commachen, Justice DY Chandrachud, who was on the bench along with the CJI and Justice A M Khanwilkar, disagreed, saying that “offering a remedy to alleviate the social or economic backwardness of a community is not an appeal in the name of religion.” Also, there was the question of whether the reference in article 123(3) of the RPA would be about the religion, caste or community of the candidate or the voter. (By implication, this means a manifesto promise to one community may not automatically constitute an offence under the Act).

The court is right for the simple reason that it is almost impossible to separate appeals to religion or caste from those that appeal to broader constituencies, but couched in different language. If direct appeals to a community to vote for a candidate or party cannot be made, dog whistles are good enough.

For decades, the word “secular” has itself been a dog whistle to the minorities to vote against the BJP or its predecessors; similarly, candidates can appeal for caste votes by demanding reservations for their caste, or even by appealing against some castes (effectively hate speech) by targeting, say, “Brahmanical domination”. Mayawati could polarise voters at one point with her slogan, “Tilak, Tarazu or Talwar, inko maro joote char – a indirect appeal to vote against Brahmin, Kshatriya and trader castes.

The intent of article 123(3) in the RPA may be noble, but one wonders whether it is not inimical to democracy itself. One can bar hate speech or exhortations to violence, but trying to restrict the kind of issues one can raise in an election amounts to a bar on free speech itself. Isn’t democracy supposed to be about people speaking their minds freely?

The bench said that offering to improve the lot of a minority community is not an appeal to religion, but this is sheer sophistry. In many parts of Karnataka today, Muslims are being urged to vote for the Congress en bloc as the BJP is seen as antithetical to their interests. The appeals are not about giving Muslims better education or job opportunities. The underlying appeal is for Muslims to not vote for a Hindu party.

But even more important, what if the issues bothering sections of the electorate do not relate to jobs or education, but religious (or caste) identity? On what basis can the law, or courts, say that identity issues cannot be relevant in an election? Can one arbitrarily decide that only education and jobs and health are legitimate, and not anything else?

Aren’t right-wing parties rising in Europe due to fears of being swamped by Muslim immigrants? If these issues can be raised fearlessly in those democracies, the only right way to combat it is through other parties speaking in different voices. It is foolish to pretend that the same issues can’t be raised in India.

Article 123(3), in fact, goes well beyond just banning appeals to religion, language and caste, and says that even use of national symbols (like the flag or emblem) is not acceptable. Key emotive issues in the Karnataka election are Kannada (versus Hindi, which is about language), promoting a new state flag (symbols) and redesignating Lingayat as non-Hindu. (religious identity)

If the provisions of this article are implemented in letter and spirit, most candidates in most parties should be disqualified.

The only things to ban are appeals for hatred against some community or the other, and calls for violence against some groups of citizens.

In some respects, the RPA is also a restriction on free speech. Time we amended it to make it saner and more supportive of free speech.