Why The Burden On Govt To Remove Fears of Muslims? First Make Madani See Reason 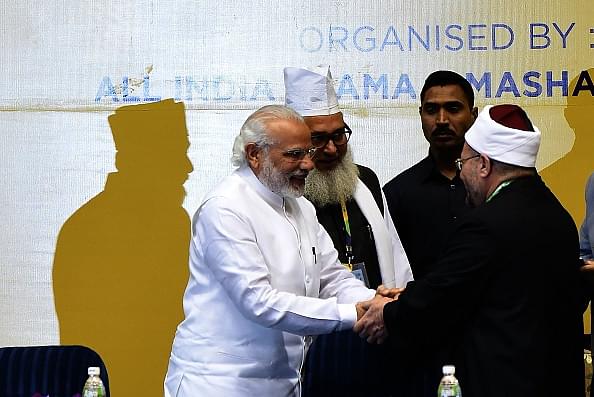 At the World Sufi Forum’s inauguration last week, Prime Minister Narendra Modi said-“all our people – Hindus, Muslims, Sikhs, Christians, Jains, Buddhists, the micro-minority of Parsis, believers, non-believers, are all an integral part of India.” He also said “the fight against terrorism is not a confrontation against any religion. It cannot be.”

However, in spite of such categorical assurance from the head of the government, an outfit representing Sufis has asked the government to alleviate the “sense of fear” among Muslims over riots.

“There is a sense of fear among Muslims due to riots. Government should alleviate this fear and Union Home Ministry should spell out what steps have been taken with regard to all the small or big communal incidents and riots that have taken place so far in different parts of the country,” the All India Ulama and Mashaikh Board (AIUMB) said in a 25-point declaration released at a mass congregation at Ram Lila Maidan to mark the conclusion of the first World Sufi Forum in Delhi on Sunday.

The AIUMB urged governments across the world including the Modi government to “revive” Sufism in their bid to combat terrorism. Addressing the congregation, AIUMB president Syed Mohammad Ashraf asked Prime Minister Modi to “rectify historic blunders” and pay heed to the community’s demands including initiation of measures to tackle the trend of replacing Sufism by extremist ideologies.

Why is the community putting the burden on the government when it faces divisions within itself?

Head of Jamiat Ulema-e-Hind head Maulana Syed Arshad Madani has said that “Sufism is no sect of Islam. It is not found in the Quran or Hadith. How the Sufis are different from the rest of Muslims: don’t they follow the same Imam, Muhammad Rasulullah; don’t they follow the same regimen of five prayers a day; don’t they believe in Quran. So what is Sufism in itself? This is a thing for those who don’t know Quran and Hadith.”

“If Madani says Sufism is not part of Islam, then surely terrorism and extremism too are not. If anyone is criticising terrorism and extremism in the country and the world, what is wrong with that and where does the government figure in that. Aren’t such calls the need of the day though 99 per cent of India Muslims are not even touched by extremism”.

One has to remember that Madani has been consistently inconsistent on the community’s position. Last year he said at a function in Kirtanpur in Bijnor (Uttar Pradesh) that Muslims themselves are responsible for bringing a bad name to the community and creating the “Islam’s image of terror”. Madani even called for spreading education in the community to change this.

“If Muslims for coming 20 years decide their agenda for education and pledge to educate their children even if they have to go without a meal, then those who hate Muslims will be forced to change their opinion,” he said.

He said that a section of people from the community have spoiled its image. “We are not following the right path. It is not the enemies but a section from within the community which is responsible for creating this image of terror,” the secretary said.

Last week he made another turn. Addressing “National Integration Conference” organised by his outfit, he alleged that minorities, including Muslims and Christians, and Dalits were being attacked during the NDA rule and asked secular forces to join hands to spread the message of “love and peace” in the fight against communalism.

Madani also claimed that minorities will not feel safe in the country if the right wing party gets majority in Lok Sabha as well as in Rajya Sabha.

“Situation today is very grim. ‘Ghar wapsi’ is being done. If anyone wants to make India a Hindu state, we will not allow it, we will spill last drop of our blood (to foil such attempt),” he said.

In the face of such belligerent utterances, no amount of the goverment efforts are going to make difference.