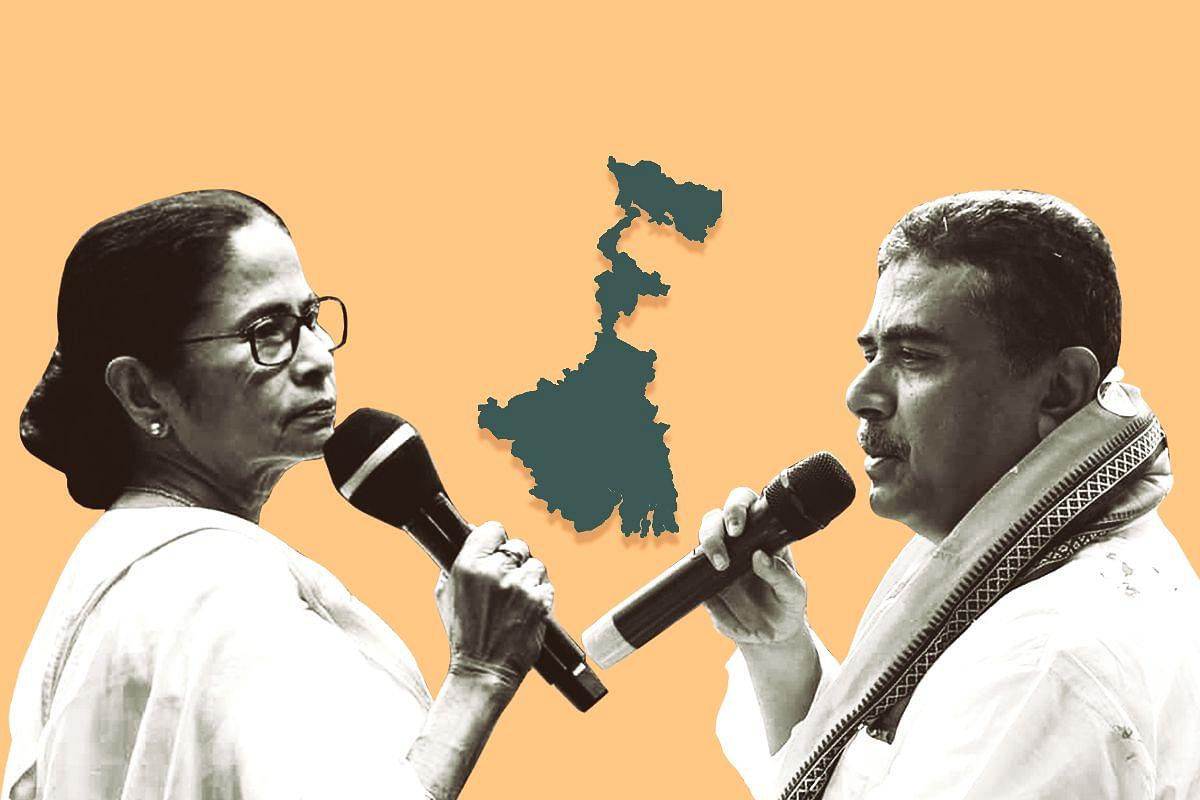 A short ‘social’ meeting between Bengal Chief Minister Mamata Banerjee and leader of opposition Suvendu Adhikari at the former’s chamber inside the state Assembly on 25 November triggered wild speculation in political circles.

Banerjee and Adhikari had a chance meeting in the corridors of the Assembly Friday morning and greeted each other. Banerjee then invited Adhikari for a cup of tea in her chamber.

“I accepted the invitation but told her that I would bring along some senior legislators of my party. She smiled and nodded her head in agreement,” said Adhikari.

Adhikari’s insistence on taking along his fellow party MLAs was a smart move on his part because it preempted the Trinamool camp from floating falsehoods had Adhikari met the Chief Minister alone in her chamber.

A one-on-one meeting between the two would definitely have prompted Trinamool spin-doctors to trigger speculation about Adhikari’s ‘return’ to the Trinamool.

This was highly likely considering the fact that Banerjee herself invited Lahiri, who was the chief economic advisor to the Government of India, to dump the BJP and join the Trinamool.

Though the CM extended the ‘invitation’ with a smile and pretended that she was joking, she would have made the offer in all seriousness.

But the soft-spoken Lahiri, a former executive director of the Asian Development Bank, simply smiled and ignored the brazen offer. He told the Chief Minister that he would be happy to help the state government in financial matters.

As soon as the four BJP MLAs led by Adhikari walked into the CM’s chamber, Banerjee enquired about Adhikari’s father Sisir Adhikari. Banerjee had a long association with Sisir Adhikari.

After spending a little under four minutes with the CM, the four BJP MLAs left and returned to the room allotted to Adhikari in the Assembly premises. Adhikari told mediapersons that the visit was a mere ‘courtesy call’ and nothing should be read into it.

But that did little to scotch wild speculations. Many, including a number of Trinamool leaders, encouraged those speculations and suggested that Adhikari, realising that the BJP would not be able to win power in Bengal, was looking for a return to the Trinamool.

But, as Adhikari put it, “nothing can be farther from the truth”.

“There is no question of anyone from the BJP joining the Trinamool. The unprincipled turncoats have already left and none of us in the party now can even think of associating ourselves with a corrupt, visionless and violent party like the Trinamool that is led by a despot,” said Adhikari.

Such unequivocal assertions will not, however, douse the speculations that will continue to swirl over the next few days. The

reason for that is in Bengal’s fractious politics characterised by deep enmity between the ruling and opposition parties, any interaction--even a social call--between political adversaries is unheard of.

More so because Adhikari, who left the Trinamool in December 2020 and joined the BJP, has become the most vocal critic of the Chief Minister. There is little love lost between the two, and both Banerjee and Adhikari have been making caustic remarks against each other.

Banerjee has not been able to live down her humiliating defeat in Nandigram (in last year’s Assembly polls) at the hands of Adhikari who has lost no opportunity to rub in the ignominy. Adhikari often refers to Banerjee as a ‘compartmental Chief Minister’, much to her chagrin.

‘Compartmental’ refers to a student not being able to clear all papers in the board exams and thus having to take that paper at a future date in a ‘compartmental exam’.

After having lost in Nandigram, Banerjee got her senior party colleague Sovandeb Chattopadhyay who won from Bhabanipur Assembly constituency to vacate the seat. She won the bypolls held there subsequently.

“Mamata Banerjee failed to enter the Assembly in 2021 in her first attempt and had to contest a bypoll from a safe seat to become an MLA. Hence she is a ‘compartmental’ Chief Minister,” explained Adhikari.

A peeved Banerjee has used the state administration to lodge a large number of cases against Adhikari and his family. The Adhikaris have also been subjected to attacks by Trinamool goons.

The deep enmity that exists between political adversaries in Bengal is a legacy of the Left Front.

The communists, who believed in ‘annihilation’ of their ideological adversaries, went about systematically decimating the opposition once they came to power in Bengal in 1977.

This decimation more often than not involved physical violence. Communist cadres threatened and beat Opposition (mainly the Congress at that time) functionaries and supporters into submission, and the recalcitrant ones were simply killed.

This gave rise, naturally, to complete political intolerance. Banerjee and her party are the products of this toxic political climate that prevails in Bengal.

She (Banerjee) had to face even physical attacks by communist cadres while innumerable functionaries and supporters of her party (the Trinamool) were attacked, maimed, rendered homeless and killed.

The leaders and functionaries of the CPI(M)-Left Front and the Trinamool thus became sworn enemies and even exchanging greetings or common courtesies between them was extremely rare.

During those long years that he was the chief minister, Jyoti Basu rarely exchanged pleasantries with Banerjee and used to treat her very disdainfully.

His successor Buddhadeb Bhattacharyya was no different and ties between Bhattacharyya and Banerjee became more toxic during and after the Nandigram and Singur agitations.

After coming to power in 2011, though Banerjee piously proclaimed that she wanted ‘badal’ (change) and not ‘badla’ (revenge), she went down the same vengeful path and unleashed her workers on CPI(M) functionaries.

The BJP, which started emerging as a powerful political force in Bengal from 2014, was subjected to the same treatment. Attacks on BJP workers and supporters peaked in the run-up and the aftermath of the Assembly polls in the state last year.

Trinamool goons attacked houses and business establishments of hundreds of BJP functionaries and rendered them homeless. A few thousand BJP workers were attacked and many were maimed or killed. Women workers of the BJP were raped and molested.

It is, thus, inconceivable that any BJP leader or functionary will interact in a cordial and civil manner with a Trinamool leader. Doing so will, justifiably, invite criticism from besieged workers of the party (BJP).

Over the past 45 years (since 1977 when the Left came to power in Bengal), leaders of rival political parties have rarely interacted socially with each other or exchanged even common courtesies. That’s because they have always viewed each other as ‘enemies’ instead of political rivals.

And that is why the very short meeting between Mamata Banerjee and Suvendu Adhikari (accompanied by three other BJP MLAs) has triggered such speculation.

In Bengal’s toxic political landscape, the two are supposed to be daggers drawn (at each other). Sipping tea together has no place in such an embittered scenario.