Why We Should Worry About Political Trends in Punjab, TN And West Bengal 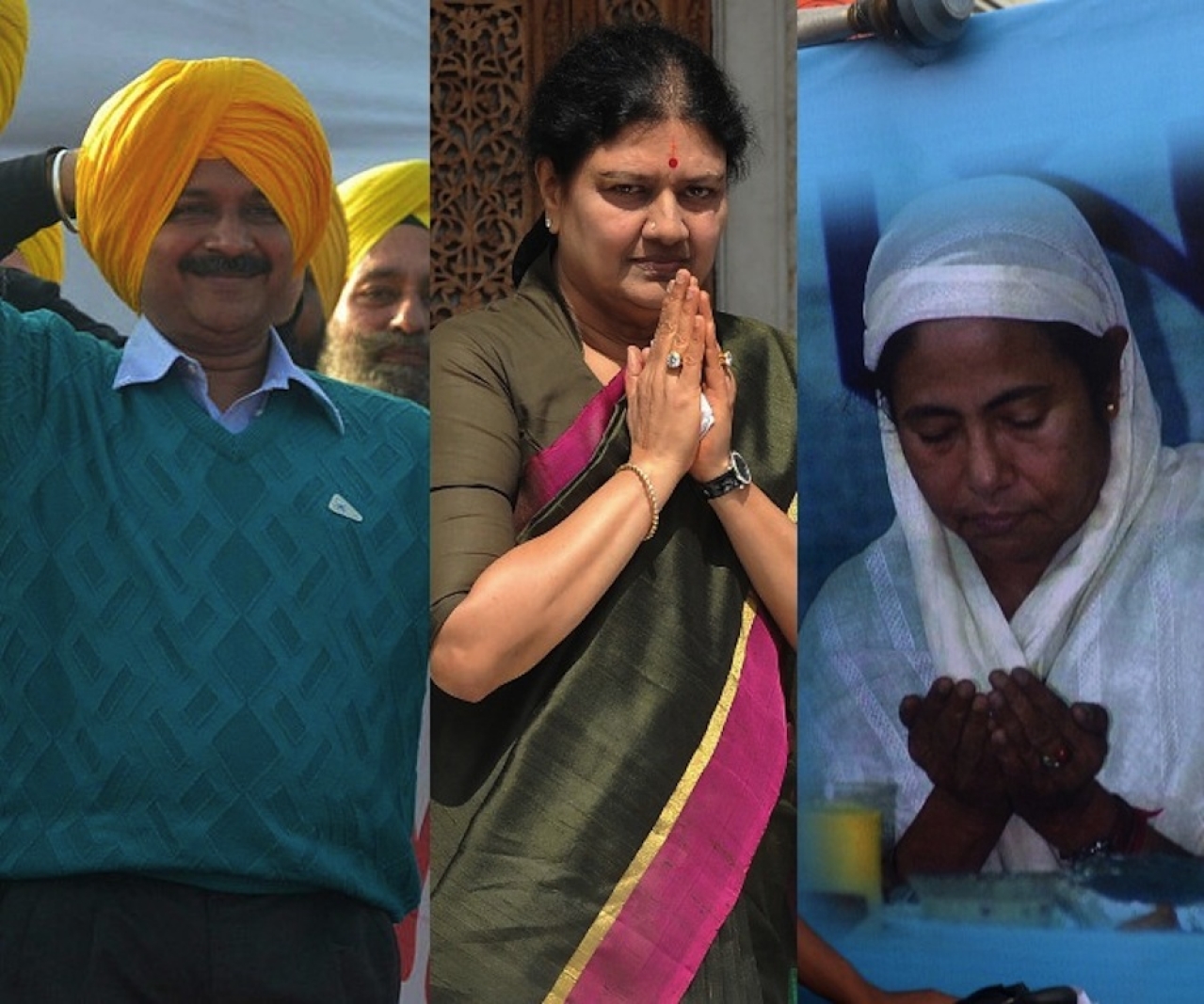 Political trends in three states – Punjab, West Bengal and Tamil Nadu – should worry all Indians - and the Narendra Modi government at the centre.

In Punjab, there is a good chance that the Aam Aadmi Party (AAP) could come to power, or at least become the strongest opposition party in the state when the results are announced on 11 March.

In West Bengal, the rising graph of communal violence, and Mamata Banerjee’s dependence on radicalised sections of the Muslim community to retain power, makes for volatile politics.

In Tamil Nadu, the recent decision of the AIADMK to replace its Chief Minister, O Panneerselvam, with “Chinnamma”, J Jayalalithaa’s “friend” Sasikala Natarajan, promises political uncertainty in the near future. Reason: the eagerness of Sasikala’s family (a.k.a. the ‘Mannargudi mafia’) to grab power so soon after Jaya’s death shows that the trust factor in AIADMK politics is gone. The chances are the party will split in due course. Unlike Jaya, Sasikala neither has the charisma nor the political acumen to manage both party and government. Dissidents will emerge from the woodwork very shortly, causing new strains in Tamil politics.

Unstable politics forces leaders to take extreme positions to consolidate their hold on power. In the process, if the leaders of these parties are not very careful, anti-national forces can take hold.

In Punjab, for example, the ouster of the Akalis from power after 10 years may make them more open to wooing extremists and Khalistani elements to prove their Panthic credentials. The Aam Aadmi Party is, reports say, already being backed by elements from both the extreme Left and Right. If it comes to power, and if the Akalis decide to test their claims to Panthic power, we will see a contest for Sikh votes that cannot but be dangerous for the country. It is worth recalling that Indira Gandhi used Sant Bhindranwale to show that the Akalis were less Sikh than him, leading to a decade-and-more of Khalistani terrorism that ended only with the assassination of Indira Gandhi by her own guards in 1984.

In West Bengal, the problem of Muslim extremism is rising for two reasons: one is the failure of the state – ruled 33 years by the Left and a further six years by the Trinamool Congress - to improve their economic conditions. Meanwhile, as Bangladesh gets tough on Islamists, they have shifted their bases to some of the border districts of West Bengal, making some parts of the state prone to Islamist pressures. This is why we saw a Muslim mob attack the Kaliachak police station early last year, and the more recent communal flare-up in Dhulagarh in December, where Hindu habitations were devastated by a Muslim mob attack.

Chief Minister Mamata Banerjee is backed by some of the most rabid Muslim elements, including Imam NR Barkati of the Tipu Sultan mosque in Kolkata, an Islamist and Banerjee supporter who openly warned about slitting the throat of a TV guest on Zee News. Parts of the state are now in real danger of slipping into the control of Islamists, and Banerjee cannot or will not do anything to keep those forces under control. The state is sinking into a state of Dhimmitude, where aggressive Islamist polemicists are coming centre-stage. With a Muslim population of 27-30 percent, this aggression may worsen under Banerjee, posing a fresh challenge to communal harmony and Indian nationalism. The state is into Muslim appeasement.

In Tamil Nadu, the post-Jayalalithaa AIADMK is an untested political force, and the decision of Sasikala to take over both the party and government from Panneerselvam suggests that she feared that the Chief Minister, after some adroit moves over the jallikattu ban, may well consolidate his power. This premature lunge for power shows that Sasikala and her backers are not sure about their real political clout with the masses, and instead want to hold all the levers of power before it is too late. The vice-like grip of the Thevars under Sasikala will surely make the other castes (the Gounders, among others) restless, and this could have two consequences: a split in the party, or a free-for-all, where all ministers representing all caste groups are given ministries to make their fortunes from.

In a fluid political scenario, the chances are both Sasikala and her detractors may jockey for popular support by taking more extreme positions on Tamil causes. History teaches us that the easiest thing for Tamil parties to do is to turn their internal power struggles into a fight against Delhi. The jallikattu agitation drew supporters from anti-Modi forces even though the BJP and Modi had nothing to do with the ban on the bull-taming sport. Just as anti-Brahminism provided the glue for political consolidation and Tamil chauvinism in the past, anti-BJP-ism will be used by various contestants in the DMK-AIADMK power struggles as the route to consolidating their own power.

Narendra Modi has a challenge on his hands dealing with the cengrifugal forces developing in two border states and one state with a history of promoting Dravidian sub-nationalism.